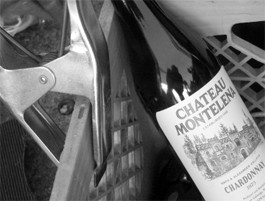 Quiet on the Set

Behind the scenes with 'Bottle Shock' filming in the North Bay

Holding her right hand against her portable headset, Stacy Stanzl, 20, listens intently to the instructions being relayed to her and then yells out, “Rolling!” Clad in jeans and a green T-shirt, the San Francisco State University student is standing in front of what appears to be a half-completed wine shop, with walls of racks just waiting to be filled with bottles. At the sound of Stanzl’s voice, the handful of people near her stop talking and working. They don’t want to make any noise that could interfere with filming on the set next door.

At college, Stanzl studies film. This summer, she’s back in her hometown, on the set of the feature film Bottle Shock. She worked in the production company’s office from late May to early August, answering phones and running errands. That was a paid position. Now she’s an intern, putting in 12- to 14-hour days, six days a week. She’s earning school credit and a résumé listing, but no money. She loves every minute.

“It makes more sense than making people lattes in San Francisco for $9 an hour,” Stanzl explains with a huge grin after the “Cut” command has been forwarded and she can talk again. “It’s much more relevant to what I want to do.”

She steps outside. Four gleaming white air-conditioned travel trailers with colorful “Star Wagons” logos are lined up in the rear parking lot of this 9,200-square-foot office and warehouse space in eastside Sonoma. Humming softly nearby is a portable generator. A Hollywood Caterers truck offers refreshments.

This is the headquarters of Shocking Bottles LLC, the production company formed to turn the Bottle Shock manuscript by entertainment-lawyer-turned-writer Ross Schwartz into a feature-length film. The movie is a light-hearted look at what’s considered the birth of the California wine business in 1976, when Napa vintages emerged triumphant from a blind tasting against their highly regarded French counterparts. It’s a romantic tale woven around actual events and focusing on the father-and-son duo of Jim and Bo Barrett of Chateau Montelena winery, which produced the winning Chardonnay.

In 2005, Marc and Brenda Lhormer, promoters of the Sonoma Valley Film Festival, read the Bottle Shock screenplay and loved it. They recruited director Randall Miller and his writing/producing partner Jody Savin. Also on board are producers J. Todd Harris and Marc Toberoff. After rewrites to the script, Miller’s film industry connections attracted a strong cast headed by English actor Alan Rickman. The long list of Rickman’s credits includes playing Professor Snape in the Harry Potter movies and the villain in Die Hard.

Operating on a shoestring budget (the producers won’t disclose the actual amount), Bottle Shock began a 30-day filming schedule on Aug. 1 in the Napa and Sonoma valleys. That’s how Stanzl came to be a set intern at the Sonoma warehouse site, equipped with a headset and unbridled enthusiasm.

“It’s the most amazing thing ever to happen in Sonoma since the Bear Flag Revolt,” Stanzl asserts, her voice filled with both humor and awe.

It’s hot on the indoor set. Really hot. Large circular lights close to two feet in diameter blaze overhead, creating perfect camera conditions but making people sweat. The air conditioning rumbles loudly. Once everything and everyone is in place, the order goes out to turn off the air conditioning. It takes a few moments before the noise dies away. Then filming begins.

Merely using plywood, paint and attention to detail, this corner of a former wine-label warehouse has been converted into an airport lounge circa 1976. Or at least the center area and three sides give that impression, with bright orange walls, a light yellow ceiling, rows of black chairs and a gray counter area displaying TWA and American Airlines logos. Visible through the “windows” is an image of a plane awaiting boarding. The fourth side of the room is dark, filled with equipment and technicians all supporting the illusion being created for the cameras.

Colorful polyester patterns of the ’70s are everywhere as volunteer extras pretend they’re waiting for a flight. The cameras focus on Rickman, portraying an English wine shop owner who was the chief architect of the tasting, and Chris Pine (The Princess Diaries 2, Just My Luck, Blind Dating) as Bo Barrett.

In today’s scene, Rickman’s character discovers he’s only allowed to carry one bottle of wine onboard his international flight to Paris. Worried that the vintages chosen for the tasting mustn’t be bumped or shaken in the cargo area, Rickman and Pine recruit other passengers to carry the extra bottles.

With a click of a slate showing the scene and take numbers, filming begins.

Rickman’s distinctive, well-modulated voice carries easily as he steps up to the TWA counter. “I’ll be traveling on flight 349 to Paris this morning,” he says smoothly. His voice carries authority and assurance.

With an exceedingly plastic smile, the woman behind the counter explains that he can’t take his 26 wine bottles on board. Rickman and Pine address the crowd. When Pine announces that his family owns a Napa winery, a voice asks, “Is your last name Gallo?”

There’s a minor hitch in the smooth-flowing scene, and a crewmember conveys the director’s order: “Back to one.” Wearing a floppy beige hat, a volunteer extra who was standing at the counter when the scene started doesn’t appear to understand the cue, and begins wandering off the set. A crewmember steps out, gently guiding her back to her starting spot. The main actors and the director don’t even seem to notice the mistake.

The scene is run several times, with a makeup artist patting the sweat off the actors between takes. It’s shortly before noon. Most people in the room began their workday between 6am and 8am, and will keep at it until 8:30pm or 9pm. A total of 60 extras and six principal actors showed up at staggered times this morning, were prepared by the wardrobe and makeup crews, then waited until called to the set.

Sonoma residents Bob Ogle and his wife Lucy Weiger are in the crowded airport scene. “We don’t call ourselves extras,” Ogle explains with a laugh. “We’re ‘background artists.'” A salesman, he took a day off to get his first experience on a movie set. His wife came dressed in a 1970s outfit that she’s owned for 30 years, but he had to be fitted into a suit by the wardrobe people. “The funny thing was trying on the clothes and remembering why I hated the ’70s,” Ogle laughs again. “All that polyester.”

The lights and sound technology fascinate Ogle, but the big draw is making a feature film with an outstanding cast. “I was blown away that Alan Rickman is starring. I walked on the set and there he was. Just hearing his voice, you think of Harry Potter and everything. It’s pretty fun–a memorable day.”

Taking it all in stride is David Hinkley, looking very ’70s in a brown corduroy coat with light-colored elbow patches. “I’m just a local actor who used to do a lot of theater in Sonoma County,” he says. “I got all the leads when I was young and pretty. Now I mostly do character roles.”

Today, he’s an unpaid extra, but in a featured spot. “I had to smoke 10 cigarettes and they got a close-up.”

There’s no way to know if the shot will be included in the final movie, but he doesn’t care. “I’d play a rock just to be in a scene with Alan Rickman and Chris Pine. Those guys are amazing.”

There’s been some controversy about Bottle Shock. It’s in production while another, higher budget film based on George Taber’s original book, The Judgment of Paris, is still being written. But this isn’t a contest or a race. The other movie will be focused on the larger picture. Bottle Shock is a fictionalized story about the Barretts, the self-proclaimed “hicks from the sticks” who shook up the wine establishment.

The script takes a few liberties, including the wine-intern love interest played by Rachael Taylor (Transformers, See No Evil). The mainstream media has made much of the fact that in one playful scene, when stranded by the side of the road, she flashes her breasts to get a passing motorist to stop and help. There was no such woman in 1976, but Taylor’s character adds spice to the story line.

Some shooting is being done in Calistoga and the Napa Valley, including at the Chateau Montelena winery, but in many scenes, Sonoma Valley locations substitute for Paris and Calistoga in the 1970s. Director Miller is thrilled by the local conditions.

“I haven’t seen an afternoon when I haven’t been amazed by the light,” he explains. “It’s very cinematic. People live here and they appreciate it, but they don’t realize how beautiful it really is.”

Before he read the script, Miller wasn’t familiar with the wine competition that’s come to be known as the Judgment of Paris, but he thinks it makes an incredible story element. It was a time when all kinds of people were involved in the fledgling California wine industry. “It’s a story about people,” Miller says. “Some of them were screwy, some were regular guys and they managed to create something wonderful.”

The story, Miller says, attracted an A-list of cast members to work for scale on this independent movie. In addition to Rickman, Pine and Taylor, the movie features Bill Pullman (Independence Day, Zero Effect, Lost Highway), Freddy Rodriguez (Grindhouse, Six Feet Under, and soon to join the TV series Ugly Betty) and Eliza Dushku (City by the Sea, Bring It On, Buffy the Vampire Slayer).

The movie’s 30-day shooting schedule is dictated in part by the limited budget, but it also makes it feasible for these accomplished actors to participate.

“It’s like coming to do an off-Broadway play for a short period of time,” Miller explains. “People want to do an artistic endeavor.”

Lori Laube and Jenifer Coté of Santa Rosa-based American Eagle Casting are charged with filling more than 450 roles for Bottle Shock. “We’ll use a lot of people more than once,” Laube explains. And they’re not just casting people, they’re also rounding up authentic-looking cars and other vehicles.

She’s happily amazed by the number of people volunteering to be in the crowd scenes (details at www.americaneaglestudios.com). “Some of them are here 12 and 14 hours a day. I can’t speak highly enough of the caliber of people we’re getting locally.”

Usually, their company works on documentaries, short films, commercials and print shoots; they’re currently recruiting models for a tourism catalogue. Laube is delighted to be working on a feature film, hoping it will attract other productions to this area. Casting work is demanding but fun, she says.

For some, it’s not a hard sell. Daria Taylor is part of the airport crowd scene. She saw an announcement about the project on the Internet just five months after she and her husband moved from Australia to California. They live in San Jose, but she thinks it’s worth the drive. “My husband thinks I’m crazy,” she says happily. To be on the Sonoma set by 8am, she departed San Jose about 6am. She’ll put in a 12- to 14-hour day, mostly standing around waiting, then drive back home, all for no pay.

“It’s not arduous. It’s a bit hot [on the indoor set] but nothing too extreme. This will be a good story to make the people back home jealous,” she smiles. “This is the day I got to stand next to Alan Rickman.”