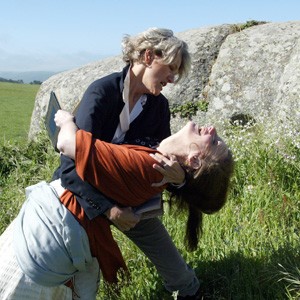 “The title, Queer Theory, is a double-entendre,” explains O’Keefe, speaking on the phone from his San Francisco home. “‘Queer theory’ is a term that came into popularity in the 1980s. It has, to a certain degree, to do with the content of gender studies programs in the university system. Queer theory is a branch of gender studies that proposes that the sexual identity of someone is partially or wholly socially constructed–which I think is a crock.

“But to a great deal,” he continues, “the other aspect of [the play] Queer Theory is that it’s also about queer people, by which I mean weird people, strange people, geeks. This show is more about the people than it is about their theories.”

The two-actor play–which had its official world premiere last weekend at the Cinnabar Theater in Petaluma, the first in a four-weekend run–is O’Keefe’s attempt to reconcile the basic political and cultural differences between two women in their 50s. One, Anne Ingersol (played by Laura Jorgensen) is a grain-elevator operator from Iowa. She never had a college education, and she’s been living on a farm with her husband, raising two kids she never really wanted. “She thinks babies look like Martians, but then she went and had two of them,” O’Keefe says.

The other woman is Rebecca Walsh (Elly Lichenstein), a gender theorist and college professor who happens to be lesbian, and who’s been living in a very privileged environment. “As a high-profile academic and gender theorist,” O’Keefe says, “she basically has the same attitude as a Calvinist preacher, except that she has different issues to fire her bullets at.”

In Queer Theory, O’Keefe throws the two women together as accidental roommates in a small cottage in England, near the birthplace of the famous Victorian-novel-writing Brontë sisters, Emily, Charlotte and Anne. Each woman has come to the Brontë’s Haworth Parsonage for her own mysterious reasons, and the resulting culture clash between O’Keefe’s off-kilter odd couple provides much of the drama and humor of the play.

“I’m hoping it’s kind of funny,” O’Keefe says with a laugh, “though this was a difficult one to write. There are so many hot-button issues. It felt like I was writing it in my own blood at times. In this play, I try not to get terribly involved in the digressive issues of whether queer theory is right or wrong, just or unjust. Basically, I just wanted to play with the issues of two people coming from different classes who are basically the same age and the same race. So it’s kind of fun. The whole idea is to bring a reconciliation between the two, and fooling around with these different positions.”

O’Keefe, 64, has written or directed over 40 plays and screenplays. Born in Iowa, he began doing theater work while attending Iowa University in 1968. A founding member of the Berkeley-based improv company known as the Blake Street Hawkeyes (the group that produced George Coates and Whoopi Goldberg), O’Keefe has gone on to build successful collaborative relationships with the experimental Iowa Theater Lab, San Francisco’s Magic Theatre, the Undermain Theater in Dallas and the Odyssey Theater in Los Angeles. Queer Theory marks O’Keefe’s fourth consecutive world premiere (after Glamour, Spook and Crystal Night, which became Times Like These) at the Cinnabar Theater, a house he’s come to appreciate and rely on.

“They give me a first-class production and all the freedom and resources I need to create the show I see in my mind,” he says. “It helps that they’ve got a great well of amazing actors to draw on, and a lighting and set designer [Aloysha Klebe] who is just amazing and very, very experienced. They are all so hard-working, the people at Cinnabar, and I respect that. It’s a great theater at which to launch a play. Every one of the plays I’ve premiered at Cinnabar has moved on to theaters all around the country.”

Times Like These, which premiered at the Cinnabar in 2002, went on to have an extended run at Odyssey Theater in Los Angeles and won several awards including the Los Angeles Drama Critics Circle Award for best playwriting. The Cinnabar world premiere of Queer Theory is the subject of an upcoming segment on KQED’s popular Sparks television series, to air on Wednesday, June 2, at 7:30pm.

An equal-opportunity playwright, O’Keefe says that Queer Theory makes as many jabs at segments of the progressive left as it does at the conservative right. “I’ve lived in the Bay Area since 1972,” he says, “and, I’m sorry, but a lot of people are kind of ‘holier than thou’ on the left. I come from very poor trash, as an Iowa kid in juvenile homes, so it isn’t like I was a white privileged male who has an easy time hanging out with left wingers. I don’t have a knee-jerk liberal reaction to any of these issues I’m writing about. Like many Iowa people, I am very independent in my choices.

“It’s very bothersome and disturbing that the left is so sanctimonious,” he continues. “It does not criticize itself whatsoever–though of course, the right doesn’t do that either. I suppose I’m trying to bring about a turnabout of the left, so that it can be better prepared to fight off the right.”

While such remarks might make Queer Theory seem important and “serious,” O’Keefe wants it made clear that his latest work is a comedy. “Though I suppose it’s a dangerous thing to say your play is a comedy,” he adds, “because if no one laughs, then it’s like, ‘Well, that was a bomb.’ And I can’t even say it’s a dark comedy because I don’t really write dark things. It’s ultimately an uplifting show–except,” he chuckles, “for really, really homophobic people.”