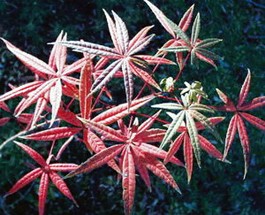 Can a modest grove of saplings in Glen Ellen turn the tide of biodiversity loss in China? The answer may be yes for the Chinese maple Acer pentaphyllum, of which there are about 50 left in China. But Quarryhill Botanical Gardens has 50 of its own. And while China’s bulldozers rev up for more Western-style development, Quarryhill has just planted 200 more Acer pentaphyllum maples in hopes of conserving this disappearing species.

“This conservation project is needed urgently,” says Quarryhill’s development director Christine Walker, “because the species may not survive our lifetime.”

I ask Walker how much it cost to put in the grove as she parks a golf cart beside the hillside, where each knee-high tree is protected by a wire cage and watered by a drip feed from a newly installed tank. “Forty thousand dollars,” says Walker. “Paid for by donors.

The once-private Quarryhill, now a public garden, is better known internationally than locally for its global role in Asian flora conservation. With guidance from Kew Gardens and Howick Hall Gardens, Quarryhill made its first scientific seed-collecting expedition to Japan in 1987 and has since has been bringing seeds, mostly from Asia, to cultivate here.

Critics fear these exotic species might escape the garden boundaries and spread, but, explains Walker, “these plants can’t escape. They require summer water and could not survive outside an irrigated environment.” (Quarryhill irrigates from two wells and pond-held rainwater.)

Every tree, shrub and flower in the 25 cultivated acres of Quarryhill’s 62-acre site has come from seeds collected in the wild and scientifically documented in the botanical collection. Quarryhill functions as a safe house for Asian species, including medicinal plants, which have been disappearing via habitat loss and poaching. Not only a major North American plant collection and open-air classroom for fourth- and fifth-graders, Quarryhill has a staff to educate visitors who, puzzled by the new rose garden in an otherwise Asian landscape, learn that roses did not spring up at Queen Victoria’s command, but rather were smuggled into Europe to indulge Napoleon’s Josephine. All English tea roses, it turns out, can be traced to four stud roses in China.

On our way back from the maple grove, Walker points out a specimen of the tree used to make paper in China, a hundred years before the rest of the world. Whatever other secrets may await discovery in Asian plants—perhaps especially for medical advances—Quarryhill will keep its collection viable and look forward to repatriating those Chinese maples now getting their start in Glen Ellen.