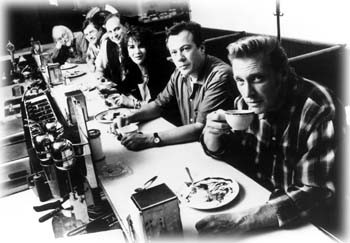 There is a haunting moment on “She Won’t be Lonely Long,” the plaintive opening track on Prairie Oyster’s new Blue Plate Special (Vel Vel) disc, in which singer and bassist Russell deCarle evokes a high, lonesome wail that for just a second sounds for all the world like the late, great Graham Parsons–the ex-Byrd and tragic godfather of country rock–risen from the ashes of his Joshua Tree funeral pyre.

“He wasn’t that much of an influence actually,” says deCarle, during a phone interview from his 140-acre ranch outside of Toronto, Canada, “though I did listen to the Byrds a little bit. I mean, we were playing when those guys were still around. And I was influenced by many of the same traditional singers as Parsons: Merle Haggard and the like.”

OK, so deCarle isn’t channeling the dearly departed–he’s still got a serious lock on the spirit of traditional country music.

Prairie Oyster–whose new CD shifts easily from honky-tonk shuffles to Tex-Mex reveries to Orbisonesque ballads–is hardly a household name in the lower 48 states. But this hard-working Canadian sextet has garnered six coveted Juno Awards (the Canadian equivalent of the Grammies) since 1986, and is generating quite a buzz stateside. Of late, music critics are lumping in Prairie Oyster with such sizzling New Country revivalists as BR5-49–country bands marked more by their love of twangy guitars and the joy of a crying pedal steel.

These are prime cuts.

In the mid-’80s, such neo-traditional country artists as Dwight Yoakum and Steve Earle infused new blood into a pop-country genre bloated by slick crossover acts like Barbara Mandrell and Kenny Rogers. By 1992, Nashville had settled into the bland pop pretensions of Garth “I’ve got an MBA and I’m gonna use it” Brooks, Billy Ray “I really wish I was a Chippendale dancer” Cyrus, and other country posers.

“You mean, that Barry Manilow in a cowboy hat thing?” deCarle asks, sizing up the competition. “I’ve always listened to country music, though I also listened to tons of rock and pop and R&B. But there’s just something about it. I hear a Ray Price shuffle and–who knows what it is?–it tweaks a mysterious thing in your brain and turns you on.

“But it’s all soul music to me. I mean, I love the Stanley Brothers just as much as I love Aretha Franklin.”

It hasn’t been easy finding the limelight. DeCarle co-founded the original Prairie Oyster band in 1974, a short-lived regional hit. “That was more of a western swing, honky-tonk sort of a thing,” he explains. In 1982, the band reunited for a few gigs and has been at it ever since. In a surprise move, Prairie Oyster became the first band signed to ex-CBS bigwig Walter Yetnikoff’s new label, which most assumed would revolve around rock and pop acts. “We’re real excited,” says deCarle, adding that Vel Vel has marketed the band in an aggressive manner rarely seen in the country side of the business. “For whatever reason, they get what we are all about. In most cases, you record an album, and if the single doesn’t do that good–bang!–you’re stuck with an album that you feel very good about but that is just sitting there.

“We really didn’t want to end up spinning our wheels again.”

Instead, Prairie Oyster is bringing pure country to the table and sweetening fans who’d gone sour on the country music industry. “I think it’s always there,” deCarle says of the traditional influences. “People who love country music are always playing it. They may not be heard on the radio and they may be hidden out there, but they’re always out there doing it. I think that no matter what happened, we’d all be playing some form of this music in some incarnation.”

So is the world finally catching up to Prairie Oyster? “Hopefully,” he laughs. “I mean, one thing we have in common with the Dwight Yoakums or the Ricky Skaggses is that we hold that tradition in very high regard.”