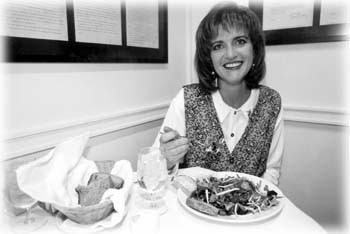 Chewing the fat over body language

SHE’S A LITTLE SURPRISED, but Petaluma nutritionist Barbara Birsinger is willing to show me her lunch. She has her smaller bag with her today; after all, she’s only here for the afternoon. Were it a full day away from the home fridge, Birsinger would have the larger thermal bag that accommodates two small Blue Ice packs, a thermos, and any number of edible whimsies to satisfy the flitting demands of her appetite. Forget former Cosmo editor Helen Gurley Brown’s admonition that a good lunch for ladies is one small smelly can of un-mayo-ed tuna packed in water.

It’s only food, but I stare in undisguised awe. Birsinger has packed enough in the bag lying unzipped on the floor of her office to feed the average weight-obsessed American woman for two full days.

“Let’s see,” she says as she rummages. “I had a Reeses peanut butter cup, but I ate it. I ate four of these,” she says, holding up a bag still containing several raspberry-filled newton bars. “I had a yogurt,” she smiles. “But I ate it.” She picks up a bag with two large homemade chocolate chip cookies in it. “I have these.” She flashes part of a deli sandwich, the lettuce pressed against the plastic. “I ate the other half of this.”

She sets a juice-flavored Calistoga water on the rug. She pulls out a bag of oversized ripe red strawberries. We both look at them. “It’s more than I can eat,” she admits. “But I feel so good. I feel like I’m taking care of myself.”

Does Birsinger tip the scales to their limit, shop large, or tax a chair? Nope. Tall and slender, Birsinger eats exactly what she pleases when she pleases and doesn’t gain a pound. What’s more, she avers that if we all did the same thing, neither would we.

“I think that everybody should dump their scales,” says Birsinger, leaning forward in her chair and laughing. “Scales are for fish. It’s absolutely meaningless, it doesn’t tell you anything. A little metal box,” she flourishes her hand, “that tells you whether you’re good or bad or whatever.”

So you want to be thin? Don’t weigh yourself. What’s more, forget everything you know about fats and carbohydrates and white sugar. “I tell people to throw out all of their nutritional knowledge, and I’m a registered dietician,” says Birsinger, who also holds a master’s degree in public health. “Knowledge isn’t it; it’s your knowledge of yourself.”

What Birsinger is discussing is something that she claims we all already know, something that we’re born with: intuitive eating. She cites studies that claim that young children, given free rein to eat a large variety of foods–both those considered healthy and downright dreck–will, over a period of seven to 10 days, choose a balanced diet. Sure, one day may be nothing but Cheetos and pop, but over that long week, their choices will balance.

“It’s innate,” she says. “Infants and young children eat intuitively, instinctively. And studies show that the more regulation that the main caretaker has over meals, the less self-regulation that children will have.” Not only do admonitions that children in Pakistan (or Berkeley, depending on the politics of your household) are starving and you’re damn lucky to even have those overcooked lima beans serve to qualify food–the portions and strictures surrounding mealtimes can warp your perceptions of food for life.

This is the bread and butter of women’s magazines. This is the page-turning wonder of Thin Thighs in Thirty Days; it’s the relish that some of us baser types felt when Jean Harris finally turned the gun on the Scarsdale Diet. Ask a woman what she likes about the simple humanness of her very own body and expect the short list. Query faults and be prepared to listen for hours. With affluence, ease, and idle time, the relatively leisured are daily more unsatisfied about the wobble, dimple, and time-marching sag of themselves.

“I have people coming to me all the time saying ‘Tell me what to eat. Tell me how much. I don’t know when to stop,'” says Birsinger, who was recently featured in an Esquire magazine article on male vanity. “Somewhere along the line we lost the belief and the trust in our own bodies to tell us what’s good for us.

“I think food was our very first comfort in life. Children learn very young that if you have a discomfort, go to food. It doesn’t really fix the problem, it’s temporary, and that’s not a bad thing. You never go to food for the wrong reasons: it’s always to take care of things. Part of my goal is to help people stop judging what they’re eating.

“Intuitive eating is picking up signals from your body,” she continues. “Eating when you first feel hungry, and not waiting until you’re ravenous–because then it doesn’t matter what you eat–and really listening to when you’re body is hungry.

“Disordered eating always starts with a diet,” says Birsinger, citing such rattling statistics as that 80 percent of fourth-grade girls have flirted with dieting. “Young girls wouldn’t start a diet unless they thought there was something wrong. It starts with the thought that ‘I’m not OK.’ That’s what we have in this culture: there is a perfect way to look, there is a perfect female body, and yours isn’t it. Maybe 1/10th of 1 percent of women in this nation have it. So what we start to do is to fix our bodies when, really, that’s not the issue.”

To eat intuitively, you must first identify your hunger: Are you “mouth hungry”–when your stomach says no but your mind says yes yes yes–or are you actually physically hungry? If the answer is a true “yes” to either–and it’s important not to neglect the avarice of the mind–then you must visualize all of the possibilities in your own fiscal and gastronomic universe. Deciding upon something, you then envision how you will feel after that food is eaten. If the feeling is, as Birsinger puts it, “ugh,” then either reduce the portion or choose something else, until your tummy says “um.” That done–simply remember to chew with your mouth closed.

“Either you decide that it’s worth the ‘ugh’ feeling or you explore other foods that have some of the same qualities that you’re craving until you make a match,” she explains. “This exercise becomes instinctive after a while; you don’t have to sit and think about it for a long time.”

But what if you’ve checked in with your body and discovered to your horror that all it really wants is chocolate cake for breakfast ?

“If you want that for breakfast and you’ve checked it out with your body and your body says OK, so what?” she shrugs. “It’s frequency and amount [that matter]. I don’t believe there’s any forbidden food. I have a master’s degree in nutrition, and I know what happens to food in your body, and I know that everything that you eat becomes a part of you in some way, but I also know that my body doesn’t want to eat lots of chocolate cake–bodies don’t want too much fat or sugar or salt or caffeine or alcohol. It’s not allowing my body to have it and then eating other things throughout the day chasing that desire.