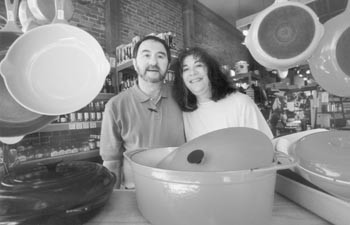 Pots and Pans: A cookware heaven

YOU WANT some coffee?” With those words Steve Bokor transforms the cluttered back office at Pots and Pans from Julia Child’s garage to a place where someone can sit and chat a bit. About this and that, and about how a former insurance and investments broker came to specialize in other people’s cookware.

Steve Bokor and his wife, Emily, started collecting their used stock in Guerneville two or three years ago after they sold the Sweet’s River Grill and opened up North Bay Mercantile, a combination kitchenware store and upscale grocery and wine shop. It was modeled after a store Bokor remembered from his hometown of Monticello in upstate New York. “It was sort of a mishmash store, with furniture and tabletops [the industry lingo for serving ware and linens], gourmet food, penny candies, baskets, stuff like that,” he recalls. “The building there was from the 1840s, and it was still in the same family. . . .

“You want some sugar?” asks Bokor, who has filled up two mugs and now paces around the office as he talks. He doesn’t like to sit, himself. He seems to have lost the habit, after six or seven years in the food-service industry.

Pots and Pans isn’t exactly food service. It’s more like food-service support. The Santa Rosa store–which celebrates its one-year anniversary this month–has become a magnet for local chefs and caterers who don’t care where a utensil comes from or how it looks, as long as it retains the heat or does the job. The rest of the 2,000 names in the Pots and Pans database belong to home cooks who either like a good deal in used cookware and cookbooks or can’t afford anything else.

Pots and Pans sells other items besides used goods. Two thirds of the cookware is new, much of it items such as Frederick Dick cutlery that get marketed only to “the trade.” Emily Bokor, who had worked in restaurants for years, handles the tabletops, the Sonoma County food items, and new and used cookbooks, which draw a steady stream of browsers. But the used cookware is the real kicker for many customers, and Steve Bokor, who buys, assesses, and sells them, is a real kick.

At the drop of a trivet he’ll describe the history, design, and three other alternatives to any device in the store you could pick up.

On incoming goods, he’s more of a tough guy, avoiding charity cases that’ll take a bucketload of elbow grease before they’re presentable. Wandering through the store, you can see right away what made the cut: Pyrex, which takes on a whisper of sepia; knives of steel, sharpened lovingly, handled gently; sturdy pans, from midrange lines and higher, with their triple-play bottoms and still-sturdy handles; cast iron, that miracle metal that just gets better with use.

Bokor pulls out a deep-sided cast-iron chicken fryer resting in a rack over in the antique side of the storefront.

The person who bought it had been on the want-list for almost nine months, ever since his sister snagged the family fryer after his mom died. The 100-year-old piece by Griswold is very collectible, and yet, as Bokor points out, the dull black surface and tight seams are still ready for action.

FROM ANTIQUE SKILLETS to last year’s loaf pans–it’s a lot to keep track of, and Bokor regularly consults with dealers and catalogs to price newer used items. But the rest he’s had to learn “by experience,” a phrase that suggests that a few underpriced treasures slipped by in the beginning.

And some stuff you just don’t know about until you have it in your hands and wonder, “What the hell?” Like a plastic form for cubing eggs, snapped up by a woman who traded weird gifts with her sister at Christmas. Bokor didn’t even know what it was until a customer said, “Oh, yeah, that’s an egg cuber!”

Then there was the 12-piece nickel cookware set from the 1930s. “If you bought that new today, if they made it today,” Bokor adds excitedly, “God knows how much it would cost.”

With its softly glowing finish, art-deco lines, and excellent heat retention, the set was extravagant in both form and function, but one piece–which looked like either a warped champagne bucket or a poacher for a 14-inch-thick fish–remains an enigma even months after the set was sold.

Steve takes a pragmatic attitude toward such mysterious equipment. “My line is, once you pay for it and leave, you can do whatever you want with it.”

This is especially so of the gadgets, whose quirky blades and odd angles beg to be put to a different use than perhaps their designers intended. More than a few sculptors have come in to forage through the garnishing gadgets that line the back wall of the shop.

“I’ve sold a couple of these,” Bokor says, holding out a wide, zigzag blade with a shrug. “Apparently it’s an easy way to put hair on a clay head.”

There isn’t a lot that hasn’t passed through these shelves, or will do so in the future, for some lucky number on the want list. The one item that hardly ever comes up? All-Clad, a top-of-the-line brand that can run close to $500 for a nine-piece set. Pots and Pans had a few used pieces when it first opened, but Bokor hasn’t seen any since.

As with a good pair of jeans, apparently people just don’t like to give it up. If you must get All-Clad, Bokor advises with a wicked grin, go to estate sales.

“Those folks didn’t have a choice to keep it or not!”