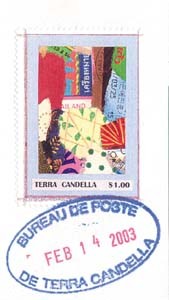 Air Mail: A visit to Terra Candella may net this work by Harley.

On an early March day, His Serene Highness, Painter of Unicorns of Terra Candella, is himself leading a private museum tour. Culled from his personal collection, the work of 50 artists from 15 countries adorns the upper floor of the Sonoma County Museum. A full-sized outline of the Serene Highness’ own dignified nude person is under one frame, darkened at the edges by sumi ink and adorned with postage and rubber stamps. Though this is a museum, the air is anything but rarefied.

His Serene Highness is more familiarly known ’round these parts as the mono-monikered Guerneville painter and mail artist Harley, and this large accumulation of artist-made stamps (known as “artistamps”), envelopes, and obscure philately is his second life-time collection. He donated the first lifetime’s worth to Ohio’s Oberlin College in 1995, a culmination of 20 years of trading and collecting, totaling some 6,000 pieces of work by 1,250 different artists.

Subverting the system while avidly participating within it, mail art is a proudly proletariat pastime, practiced by an unusual set of people, not a few of whom find that sending a single, brilliant piece of tiny work to a stranger in another country entirely represents their preferred round of human interaction.

Literally a correspondence school that anyone so inclined may join, mail art encourages side-stepping the tightlipped insular hip of galleries and museums. Its transmission is regularly carried out by postal workers the world over, though in rougher countries, the art must be delivered by courier, as anything distinctive is generally expected to be seized.

Most of the artists collected in “Post Modern Post: International Artistamps,” showing through April 27 at the SCM, have created their own stamps, though many also fashion the envelopes as artworks, and some–like His Serene Highness–have their own imaginary countries, replete with postal cancels, seals, and tax bars.

Presiding over Terra Candella, loose Latin for “land of light” (a presence more of mind than real estate), Harley serves as a guest curator in conjunction with the museum’s examination of its building’s origins as a post office, even going so far as to obtain an official U.S. “first day” postmark for March 8, 2003, remaining good for 30 days and available for stamping in the museum’s gift shop.

The inwardly curled world of avant-garde philately includes one Clemente Padin, an Uruguayan who was sent to prison for two years for the subversive act of practicing mail art. The Argentinean artist Edgardo Antonio Vigo turned to making artistamps after his 18-year-old son was “disappeared” by the government and his grief was too large to be contained by just one continent.

Partners Alexander Kholopov and Natalia Lamanova take their official Russian documents and overlay them in a perforated collage of new economy dissent. In another gallery, Lamanova has covered a huge “stamp” sheet with a nude black-and-white portrait of herself glaring dispassionately from a couch.

The Japanese artist Ryosuke Cohen collects the artistamps sent to him, screens them onto oversized pieces of paper, and then invites such dignitaries as Harley to lie upon them to be traced. He inks out the edges, the sumi eerily not quite covering the bright images underneath, resulting in gorgeous “portraits” with hundreds of voices pulsing in them.

Harley pauses before the seemingly playful work of Italian mail artist Guglielmo Cavellini, whose oversized stamps feature droll self-portraits of himself next to reproductions of Van Gogh, Cezanne, Warhol, and the deposed Shah of Iran, all offered as equals.

“His family owned the equivalent of WalMart, and Warhol probably did do his portrait,” Harley says. “His shtick was ‘self-historicalization,’ the penultimate ego trip, megalomaniacal excess.” So these aren’t farcical? He shrugs.

One artist regularly sends Harley entire books filled with work. The pressure to create new artistamps to send out into the world must be enormous once one begins to succumb to the near-anonymous lure of mail art. Harley admits to keeping his correspondence down to “a small group,” but looks around at what he assures is but a portion of his collection and sighs, “You could do this all the time.”