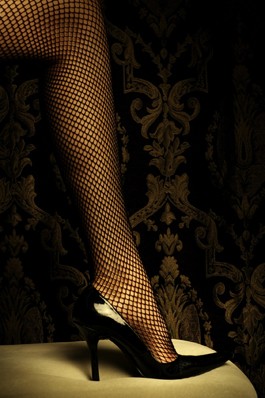 SHOE NUFF? At it’s core, the debate concerns what might be a ‘bedroom essential.’

The term “bedroom essentials” is the center of conflict between the city of Santa Rosa and Spice Sensuality Boutique, a new women-oriented sex store on Fourth Street. The owners of Spice say that the term accurately describes what they sell in their store, while the city says it’s so misleading that Spice either has to stop selling intimate items or move to another location. The situation is stirring up controversy as only sex issues can.

Chuck and Moira Freese opened Spice in Santa Rosa two months ago. Their Rohnert Park store has been operating for two years. Spice sells lingerie, oils, lubricants, sex toys and pornographic DVDs, among other things. Their customers are 95 percent women, most of whom are over 30. The idea was to give women a place to buy personal items that wasn’t on the Internet or in a threatening environment.

“In the past, if a woman wanted to buy intimate products, she had to go to an adult bookstore with the peepshows and the open-browsing magazine racks,” says Chuck Freese. “The kind of place where your feet stick to the floor when you go into it. We wanted to provide women with a comfortable environment to shop.”

Freese says that when they applied for a business license, they discussed the adult products with the Santa Rosa Planning Department. They were told that as long as they were discreet in displaying the adult items, they could sell them. Freese described the items as “bedroom essentials” on the application, and Spice was classified as a lingerie store.

Then someone complained. The next thing Freese knew, the city handed him a letter saying that the store was in violation of an ordinance because it sold pornographic DVDs and toys depicting genitalia. Freese says that the city reclassified Spice from lingerie to adult entertainment and gave them two choices: They could move to a shopping center like Santa Rosa Plaza or drop the sex-related items and just sell lingerie.

“They had a litany of everything we had to get rid of, and it was anything to do with sex all the way down to condoms,” says Freese. “You can buy those at Safeway.”

However, the city says it didn’t reclassify the store—Spice was just too vague about what it was selling in the first place.

“They misrepresented themselves on their application,” says council member Jane Bender. “They listed bedroom essentials as well as things like lingerie and lotion. I haven’t a clue what bedroom essentials means. It can mean sheets and pillowcases. They needed to be explicit, and they were not.”

The city will not reveal who made the complaint against Spice, but admits that it wouldn’t have noticed the store if someone hadn’t drawn attention to it. Freese believes the complaint was made by one of the neighboring businesses.

“There is a small group of people who are biased and prejudiced,” he says. “They are afraid that a sex store would attract transients and drug abusers. But those are the kind of people that my customers are trying to avoid.”

Other women-oriented sex stores in the North Bay include the Sensuality Shoppe in Sebastopol and Pleasures of the Heart in San Rafael. Jennifer Islas, who owns Pleasures of the Heart, hasn’t had a complaint in nine years of running the store. Maintaining a woman-friendly atmosphere has meant making choices about what to sell. For example, Pleasures doesn’t sell most DVDs.

Freese says he would be happy to go over objectionable items with the city, but officials don’t want to negotiate. He has now hired an attorney. “I’m not trying to stir up trouble,” he says. “I just want it to be equitable and fair so that we can sit down and explain why I have to lose my livelihood.”

For its part, the city says that Spice is not being picked on because of the nature of the business. It’s simply a matter of a violated ordinance.  “They can fight it the way anyone else fights it,” Bender says. “They can have a Zoning Administration Hearing and after that, they could hire an attorney if there is a ruling against them.

“Or,” she adds. “They could just sell their lotions and lingerie and sell the other stuff online. Or they could move to one of the shopping centers. They do have options.”