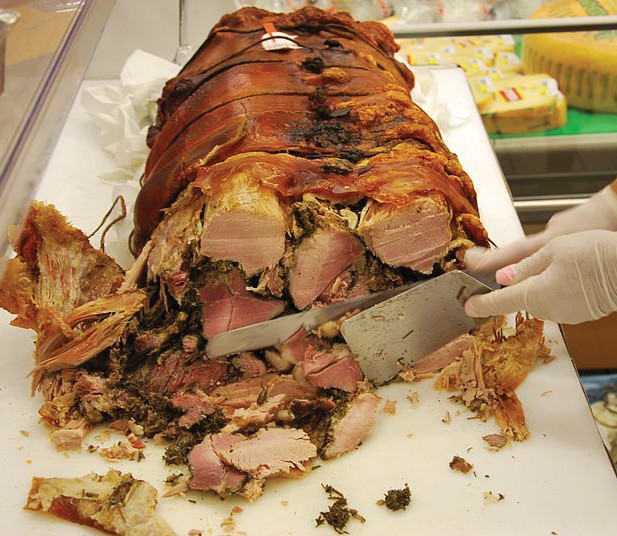 Take a giant pork roast and flay it out flat. Cover it with goodies and roll it up like a big doobie. Bake it, slice it into pinwheels and then get high on pig juice. That’s called porchetta, and it will be a main attraction at John Lyle’s three-course dinner at Epicurean Connection in Sonoma.

The Hardcore Farm to Face chef prepares chicken and dumplings to open the dinner, and finishes with a fig tart with caramel sauce. (Personally, I’d have just poured the pig juice on everything, but I have a disgusting fascination with pig that borders on the mentally unhealthy. Lyle’s version is probably better. Probably.)

Butcher and farmer Adam Parks of Victorian Farmstead Meats is on hand to answer any questions about the pork’s background, diet, name and other oddly specific questions that might arise. And instead of the traditional pig and Pinot pairing, a 2007 Korbin Kameron Cabernet is served with the pork, with a 2010 Idell Chardonnay accompanying the chicken and 2006 Parmelee Hill Syrah with dessert. Chalk up these interesting pairings to the Epicurean Connection, a place known for its superb taste in wine and cheese.