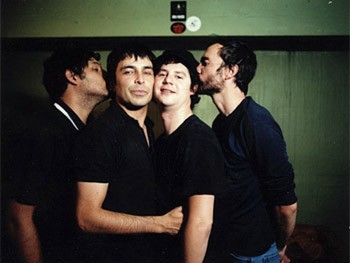 Couldn’t Ya Just Kiss Them?: The Shins surely owe Zach Braff a drink.

For some reason, a good rock song never sounds better than when it’s featured in a movie, and that’s why I finally started liking the Shins. Just like a million other people, I saw Zach Braff’s Garden State and latched on to the scene where the crushworthy Natalie Portman character accosts Zach Braff’s slightly less crushworthy character in a hospital waiting room with the headset to her Discman, insisting he listen to this one Shins song. Zach Braff puts the headsets on, and “New Slang” comes blasting out, and instantly I rolled my eyes and thought, “Oh, geez, of course it’s that Shins song.”

But then, glory of glories, cinema and I had a moment, and “New Slang” became the best song ever. Looking on it from a cynical angle, it seems pathetic that we’re impressionable to the point that a movie can make us care about a song we never cared about before–but that’s what good movies are supposed to do anyway, right? Make you care about made-up, ephemeral things?

Before rock ‘n’ roll, pop songs didn’t appear in nonmusical movies as much as they do now. Hollywood wasted no time in seizing upon rock ‘n’ roll, most notably injecting Bill Haley’s “Rock around the Clock” into 1955’s Blackboard Jungle and, in 1956, capitalizing on the craze in the vapid but vibrantly glossy Jayne Mansfield cheesecake vehicle The Girl Can’t Help It. Since then, rock songs have been used in movies to both zero affect (the Association’s songs in Goodbye, Columbus) and effect so great it nearly defines a generation (Dustin Hoffman standing passively on the people mover at the airport as “The Sound of Silence” cues up in The Graduate).

Sadly, today’s mainstream movies tend to use bad rock music more as something to populate wannabe-blockbuster soundtrack CDs than to actually add anything special to the film–think about all of the trite power ballads that invariably screech on and on over closing credits of summer action flicks (thanks a lot, Aerosmith!). There’s also the cheap trick of trotting out instantly recognizable period songs to evoke an era, as Robert Zemeckis did by featuring a different Top 10 hit every 30 seconds in Forrest Gump— going for the populist jugular, as it were. Scenes that really stick with you are sneaky, though, and capitalize on exactly the one song you don’t expect to hear.

There are people in the world whose job it is to pick out exactly those unexpected songs for movies. Dang. Who wouldn’t want that job? And what director would give that job away? In all the aspects of making a movie, deciding on songs has to be one of the best parts–it’s like making a huge, beautiful mix tape that the entire world can hear! I don’t know about you, but I already have soundtracks picked out for all of the pretend movies I think about when I should be doing other things, like looking at the road when I’m driving a car. That’s probably what directors like Wes Anderson and Zach Braff do when they are driving their cars, too, only their movies actually get made.

A good movie can take a previously meaningless or unknown song and make it earth-shattering (the endless repetition of “Everybody’s Talkin'” in John Schlesinger’s Midnight Cowboy) or take a completely played-out song and suddenly beam it into another dimension (“Blue Velvet” in Blue Velvet). A well-positioned song in a movie can also be career-breaking for musicians. Think about the unlikely success of Gary Jules’ cover of Tears for Fears’ “Mad World,” which poignantly played at the end of Donnie Darko. Before Donnie Darko, Jules was just some regular musician guy; his song is used in a movie that flops, then gains a rabid cult following after its video release. Suddenly, Jules is the toast of alternative and adult contemporary radio!

Of course, for every Gary Jules there’s also the totally forgotten band that sang the theme to Strange Brew. The Shins had already garnered a solid fan base before Garden State, so they’re in no danger of such a fate. Nevertheless, they probably want to buy Zach Braff a drink.