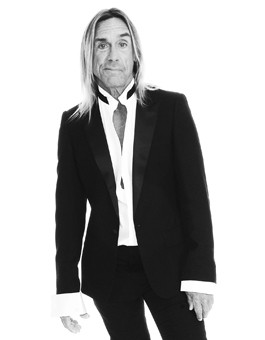 Iggy Pop’s last solo album, 2003’s star-studded Skull Ring, was an abrasive segue to the Stooges’ reunion (Raw Power‘s James Williamson is on board for the next one), but this week’s Préliminaires is like nothing the old Iguana has ever done. Sounding like a homage to the recently released Serge Gainsbourg masterpiece Histoire de Melody Nelson, the 12-song set is inspired by French author Michel Houellebecq’s 2005 apocalyptic novel The Possibility of an Island.

“I thought the book was a motherfucker,” Pop said recently, and his subdued song suite is no different. It’s a shock to hear him sound so seductive on the opener, a flamenco-sketched cover of jazz standard “Les Feuilles Mortes (Autumn Leaves),” sung in French. But his deep, commanding Cohen-esque delivery works, as it does on gentle piano ballad “I Want to Go to the Beach,” which almost sounds like a late-era Johnny Cash outtake.

While inherently strong in concept, Préliminaires—initially outlined by Pop while living alone in his Florida cabin—could be his most eclectic record yet. It seems to cover all of his previous music colors, from the dirty synth-funk of his Bowie/Berlin era in “Party Time” to straight-ahead rawk in the electric thump of “Nice to Be Dead.” The acoustic “He’s Dead / She’s Alive” wouldn’t have sounded out of place on the Stooges’ debut, while “A Machine for Loving” is a spoken-word exploration of dog-owner relationships that’s more thought-provoking than gimmicky.

Most thrilling, of course, are the jazz excursions, like Jobim’s “How Insensitive,” where Iggy actually croons effectively. The highlight on Préliminaires, though, is “King of the Dogs,” a New Orleans stomper. “I got a smelly ear, I got a dirty nose, I don’t want no shoes, I don’t want no clothes,” Iggy sings with a virtually audible grin. “I’m living like the king of the dogs.”

I’m not sure if Préliminaires will inspire listeners to check out Michel Houellebecq’s book, but it reaffirms that Iggy Pop is still an artist to watch.