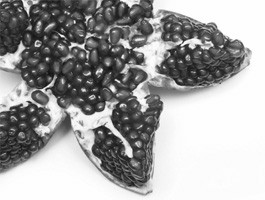 Marcel Proust had his madeleines, soaked in his aunt’s lime-flower tea, but for me, the lost flavors of youth were weirder than cookies. When I was growing up in Iran, there was gojeh-sabz–green, sour, unripe plums sprinkled with salt. There was khash-khosh, the large poppy bulb containing white seeds that we kids loved to snack on (my brother and I later learned they contained a mild dose of opium). But my true love, the food whose memory left my mouth parched and my heart aching, was the pomegranate.

In Tehran, pomegranates would make their appearance just as the year’s other fruits were shriveling away. The air would turn crisp, the mountains on the city’s northern edge would gleam with new snow and my father would arrive home to our basement apartment in the evening carrying a heavy paper bag crammed with pomegranates. Ecstatic, my little brother and I would empty the bag and grab at the hard, red globes that rolled across the table. We’d each pick one and knead it with our thumbs, expertly crushing the insides without splitting the skin. Then, when it felt as squishy as a water balloon, we’d sink our front teeth in like vampires, puncturing the surface and letting the tart, red juice flood our mouths.

Our thirst slaked, we’d cut a new pomegranate into quarters, peel away the transparent inner lining and bite in. We munched on the ruby-colored seeds and chewed their hard pips into a buttery pulp that washed down the sweet, tangy flesh. After three or four pomegranates each, we looked as if we’d survived a sword fight.

The anar, as the pomegranate is called in Iran, is a culinary and linguistic staple. It is the fifth word that first-graders learn to read, right after “water,” “father,” “gave” and “bread.” It is a central ingredient in fesenjan, the succulent duck and walnut stew that is an Iranian delicacy, and a source for the deep reds in Persian carpets and miniatures. It is our equivalent of the Western apple, our winter’s daily fruit; the round, red icon every child knows intimately and sees everywhere.

At sidewalk juice bars, the proprietor would slap a few pomegranates into an aluminum squeezer and produce a glass brimming with a slightly acidic elixir that dissolved the soot and grime of the city. On autumn trips out of town, we’d spot tall mounds of the fruit on the side of the road and buy them from farmers.

On a visit to my aunt’s pomegranate orchard, in a village five hours southwest of Tehran, I wandered dreamily among dwarfish trees whose branches, with their yellow-and-green cigar-shaped leaves, sagged with fruit so ripe the skin had split to reveal the glittering seeds. Each pomegranate carried the individual tree’s flavor, and every tree had to be tried. Some tasted light and floral; others had deep, smoky undertones. Inhaling the sharp, fresh air, I lugged a crate of pomegranates up to the house to devour them beside the kerosene heater.

While the pomegranate is believed to have come from the Middle East, where the summers are hot and rainless, the English word derives from Old French (pome, for its shape) and Latin (granata, for its granular insides). Pomegranates in turn lent their name to garnets, for their color; to grenades, for the way the seeds fly out when the fruit is dropped; and, some believe, to the city of Granada (the Moors brought the fruit there from the East).

The pomegranate’s leaves help heal bruises, and its root peels repel insects. It may have even served as an early form of Prozac–the prophet Mohammed is said to have told his followers, “Eat the pomegranate, for it purges the system of envy and hatred.” But my favorite reference is from Persian mythology, in which a hero named Esfandiar becomes invincible after he eats the fruit.

It makes perfect sense to me: my father, the heroic provider of pomegranates, is named Esfandiar, too.

My pomegranate childhood ended abruptly in January 1979 when the Islamic revolution swept through Iran. For months, anti-Shah protesters had rioted in the streets. Schools and businesses were closed, and the whole country was on strike, causing shortages in gas and electricity. As dusk fell and gunshots echoed in the street, my family huddled in my uncle’s apartment upstairs, playing cards with our cousins around the candlelit korsi, a low table covered with blankets and quilts. Finally, on a snowy night two weeks before the Ayatollah Khomeini arrived and three months before I turned 12, my family boarded a plane for the United States.

The supermarkets in America were enormous, but they didn’t hold a single pomegranate. You could occasionally find one in a specialty shop, looking forlorn, like a new immigrant who hadn’t yet found a job. Even before tasting them, we could tell that these shriveled transplants would be dry and flavorless, good only for adding a splash of red to a table setting. Living in Portland, Ore., a city too wet for pomegranates to grow in, my mom learned to fake her fesenjan with tomato paste and brown sugar.

For me, pomegranates became a casualty of the revolution, stored with gojeh-sabz and khash-khosh and other memories of my now-inaccessible childhood. In their absence, these foods became mythological, and I even began to doubt that people still really ate them. If such stalwart institutions as the Persian monarchy or my American-run school in Tehran could be toppled, surely pomegranates didn’t stand a chance.

Even when I moved to California, a climate much closer to Iran’s, people I met had either never seen pomegranates or felt intimidated by them. “They’re too hard to eat,” they would say. “Too many seeds.” “Not worth the effort.” With a preacher’s passion, I defended the fruit, seeds and all. But eventually I gave up. California’s markets were stacked with plenty of other fruits over which to rhapsodize.

Little did I know that even then the American pomegranate was beginning to emerge from the underworld of obscurity. In the late ’80s, online flower mogul Lynda Resnick bought land in central California that included some pomegranate trees.

She tasted the fruit, got hooked and began to look into its health benefits. Research from the University of California has shown that pomegranate juice contains more antioxidants than red wine or green tea, and a study by the Technion-Israel Institute of Technology found that the juice may reduce plaque buildup in arteries. Over a decade, Resnick planted 6,000 more acres of pomegranates. Her company, Los Angeles-based Pom Wonderful, is determined to spread the pomegranate gospel.

“We’re making every effort to take away the fear factor,” says Fiona Posell, a Pom Wonderful spokeswoman. The company’s supermarket displays include brochures with tips on how to open a pomegranate mess-free (underwater, so the juice doesn’t squirt out), how to freeze it for later use and what to call the seeds (arils). A few years ago, Pom Wonderful launched a line of juices in distinctive bulbous bottles that helped spark a nationwide craze for pomtinis and pomdrivers. The juice even made a splash on reality TV, when the Fab Five swooned over pomegranate spritzers on Queer Eye for the Straight Guy.

But you don’t have to ingest the fruit to reap its benefits. Murad puts out a line of pomegranate skin-care products, Calvin Klein has a pomegranate-infused perfume and Henri Bendel makes a pomegranate candle. According to a breathless article in the Florida-based Sun, Calista Flockhart has even bathed in the juice, an option my brother and I never considered.

A few years ago, my father began to report sightings of decent pomegranates in California farmers markets. Inspired, he planted a pomegranate tree in the backyard. My mother has returned to making her fesenjan with the real thing. But the moment I knew America had finally joined the tribe of true believers was two winters ago in a Queens supermarket. Picking through the usual slim offerings, I came upon a three-foot-high box of giant pomegranates selling for $1.99 apiece. I hefted one; it was reassuringly heavy. After inspecting it for signs of age, I bought two, went home and rediscovered the sweet and tangy nectar of childhood.

Well, almost. Last fall, my father and I returned to Iran, and at a little store in our old neighborhood we ordered a fresh cup of pomegranate juice from a man with an aluminum press. The juice was pinker than I’d remembered, with a clear yet complex flavor that carried hints of the leaves and the soil and the air we’d been away from for so long. Then we ordered another cup, and I thought of a remark from Tom Tjerandsen, manager of the San Francisco-based Pomegranate Council, that made me feel proud of those fragrant little trees on my aunt’s farm. “We do produce what has become known as the gold standard,” he said of the four American varieties that have recently gained prominence. But one other country still wears the crown. “The only place you’ll find better pomegranates,” he confessed, “is in Iran.”