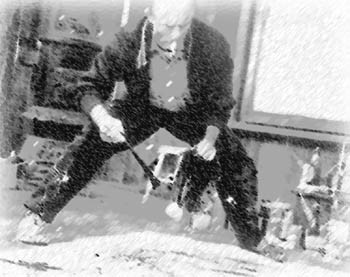 Portrait of an Artist

Striking ‘Pollock’ never quite penetrates the riddle of artist’s life

NOW THAT everyone worships him as a dead art saint, no one will connect Jack the Dripper’s penchant for public urination with his talent for splashing paint. In Pollock, director/title star Ed Harris re-creates the way action painter Jackson Pollock spread drips and splatters onto canvases of still-breathtaking harmony.

The paintings themselves often exonerate Pollock’s turbulent, self-destructive life. He was not just the most celebrated American artist of his age; he was also the most self-hating: a corrosive, battling drunk who acted like a rock star on a bender.

What the fictional film Pollock (now showing at the UA 5 in Santa Rosa and the Sequoia in Mill Valley, and up for two Academy Awards, including a Best Actor nod to Harris) describes well is the mid-1940s art scene: backstabbing, hardscrabbling, the audience barely existent, the market practically nil. This film vividly portrays the way the ruthlessness of this scene turned inward on the artists. But it doesn’t go far enough in showing us what tormented Jackson Pollock.

Pollock makes the artist’s long-suffering wife, Lee Krasner, into a saint, too. Marcia Gay Harden’s performance (which scored her a Oscar nomination for Best Supporting Actress) is so strong that the film ought to have been called Pollock and Krasner.

Harden sought the feminist notes in this artist–note that two women, Barbara Turner and Susan Emshwiller, collaborated on the screenplay. Harden has one especially powerful scene–her furious reaction to Pollock’s suggestion that they have a baby. She’s smart enough to understand she’s already burping and diapering her husband full time.

But was Krasner–who sacrificed herself so utterly, who forced an unwell man into marriage–really a feminist hero?

Amid the conflict between Pollock and Krasner the other performers seem incidental.

Harris’ real-life wife, Amy Madigan, plays Peggy Guggenheim in a visual range from Mrs. Nosferatu to Lady Bird Johnson. It is only after reading about Guggenheim’s treatment of her stable of artists that you learn why someone might want to pee in her fireplace, as Pollock did. Guggenheim pioneered the financial advance that needed to be paid off in profits or repaid–the same technique that the recording industry has used to break down so many musicians. She was also essentially the only game in town for abstract artists during the mid-1940s.

An easy laugh is reaped from Guggenheim’s long-suffering assistant, Howard Putzel. Bud Cort reputedly gained 100 pounds for the Wayland Smithers-style part of Putzel. The question is, Why? He’s onscreen for only minutes.

By contrast, Harris has well-treated Clement Greenberg (Jeffrey Tambor), the first critic to recognize Pollock’s qualities as an artist, back when others were deriding his art as “baked macaroni.” Tambor, who excels at acting stout stuffed shirts, inflames Pollock with a trifling comment. When Greenberg says a particular painting has failed, Harris’ Pollock growls, “I’ll go back and fix it for you.”

Critics are generally portrayed in the movies as parasites. They hang around “like a passionate gambler without any money,” as Chekhov wrote. But Harris gives Greenberg his due. In the end Greenberg has the guts to tell Pollock that he’s losing his talent. Few critics have the integrity to face down their targets without any consoling words.

There’s a smaller role for Pollock’s last lover, Ruth Kligman, played by Jennifer Connelly. I was sorry to see Harris relegating Connelly to the background. Harris considered the lissome Connelly, in her fetching array of bathing suits and summer clothes, less fascinating than the pain of a blocked, raging artist on the warpath.

MUCH of the film is spent waiting for Mt. Pollock to blow up, though the lyrical moments hold your attention. Early in the film, Harden’s Krasner lures Pollock into her bedroom. Not since the film Crush have we seen the sensual side of Harden, who looks like a plumper version of pinup queen Betty Page. Her Lee undresses in shadow at the end of a hallway. You can’t see her body, just her silhouette. You can hear the different clicks and snaps of her clothing coming undone.

Listening to these little sounds, I remembered the story in Isak Dinesen’s Seven Gothic Tales, where the old seducer remembers how differently women undressed 50 years previously, in the days when their flesh was held in by metal and stays and laces. Perhaps it’s immaterial that the real Lee Krasner looked less like Marcia Gay Harden and more like Chico Marx.

The painting scenes are Harris at his best. Individual scenes of Pollock are in the league of H. G. Clouzot’s documentary The Mystery of Picasso, which showed the artist at work. Early on, as Pollock constructs the mural for Peggy Guggenheim’s apartment, there’s a me-and-my-shadow scene of him in front of a monster canvas, with the artist pacing in front of this blank space he proposes to fill.

Similarly exhilarating (though its exact occurrence will never be proven) is the Eureka moment, after Pollock trudges off to his studio in the snow. He heads out wordlessly into the unheated studio like a man on his way to the coal mine. After stocking a pitifully small potbellied stove and putting on some music, Pollock studies and studies his canvas. He lays down a crooked stripe of silver radiator paint as broad as duct tape and suddenly notes a curlicue drip of paint on the floor. Later, Krasner’s congrats (“You’ve done it, Pollock. You’ve cracked it wide open”) gives the vicarious pleasure of hitting pay dirt.

Harris’ Pollock is both virile and terrified, a stag in the headlights. He’s compelling, but he’s too much: there’s too much calculation of the mesmerizing gesture. We see Harris’ Pollock lighting a cigarette in the time it would take most people to go out for a pack of smokes.

One scene exposes the limits of Harris’ Sam Shepard-style look at Pollock, an Arizona artist gone east. Pollock is doing a radio interview and comes close to explaining his method. “I defy the accident,” Pollock says, meaning that he doesn’t believe in randomness when he’s painting. (And yet there doesn’t seem much that’s accidental in either Pollock or Harris’ performance.)

The interviewer and the artist pass a heavy old-fashioned microphone back and forth, putting silence between the questions. In this scene, Harris’ Pollock is communicating for a change. Why does he sound so different here than from the rest of the movie? Because he’s supposed to be stiff with fear from being on the spot? I’d suggest that maybe, in re-creating Pollock’s tones from tapes or transcriptions of the interview, a different type of Pollock than Harris’ character emerged.

While Pollock never goes wrong in the usual ways of an artist’s biography, there’s something missing and baffling in this movie. You try to read between the lines, and there’s not always material there. Harris feels so much sympathy for Pollock’s silences that he never goes up against them. The mystery of the artist is never peeled.

There’s something significant about his mother, who keeps turning up; but what is it? Read the source for this film, Jackson Pollock: An American Saga (Woodward/White; 1998) the definitive biography by Steven Naifeh and Gregory White Smith, and you find a better idea of what was eating him.

THE AUTHORS decided that his mother emasculated Pollock, and that she drove the artist’s father away. It seems a simplistic argument–if it hadn’t been for Stella Pollock’s striving and culture-vulturism, how would two of her sons have grown up to be artists?

But the film tiptoes around this relationship between Pollock and his mother. Family dinners set him off, as we see. When Pollock starts drinking one Thanksgiving, he flips over the table. No one tries to calm him down–it’s Harris’ view of the artist’s torment, understood by none.

In the interests of machismo, however, Harris left out one very strong reason for Pollock’s incredible booze consumption and self-hatred. Introducing Pollock’s mentor Thomas Hart Benton into the film might have spelled the matter out.

Benton was a great denouncer of the New York sissiness that was draining the vital juices from art. All this raillery was interrupted by Benson’s suspiciously extended camping trips with younger men. From Benton, Pollock inherited fears of the unmanliness of doing art that was abstract instead of social realist.

Pollock’s bisexuality, with which he wrestled all his life, may have been reason for his drinking and bullying. Pollock’s trysts with men is one part of the story Harris banned. Why? Because modern movie audiences couldn’t deal with it?

We’ve seen rock musicians, writers, and more than a few artists tearing up the screen in the throes of their creative torment. Here was the opportunity to show a different kind of torment: the story of how a macho artist–married, Schlitz-drinking, kind to his pet raven and his pet dog–felt that he wasn’t really straight and couldn’t stand it.

Harris is a commanding actor, serious and intense, but as a director he backed off from the most unusual part of the story. As a result, his often striking movie is a lock without a key.