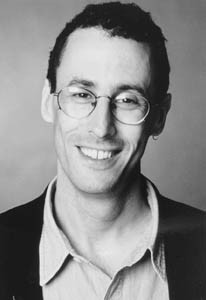 For his effort, Kushner won the Pulitzer Prize and two Tony Awards for his two-part seven-hour 1993 Broadway masterwork, Angels in America: A Gay Fantasia on National Themes. The production made Kushner something of a lightning rod in the post-Reagan era and also set the playwright up as a highly sought-after lecturer on human sexuality, society, and politics.

That last role brings Kushner, 44, to the Luther Burbank Center in Santa Rosa on Feb. 5 when he will be interviewed onstage by KQED radio host Michael Krasny. In addition, Kushner may read from Henry Box Brown, an as-yet-unproduced play about a Virginia slave who shipped himself to freedom inside a custom-made crate.

The appearance is a benefit for Actors Theatre, the Santa Rosa-based theater company that is staging Angels in America (Part II runs through Feb. 10). Expect a lively conversation focused on the nexus of art and politics.

Like Angels in America, his other plays–including 1985’s A Bright Room Called Day, 1987’s Hydrotaphia, and 1990’s The Illusion, the tragicomic adaptation of 17th-century neo-French classical dramatist Pierre Corneille’s L’Illusion Comique, staged last month at the Marin Theatre Company by foolsFURY–are also concerned with the moral responsibilities of people in politically repressive times.

FOR HIS PART, Kushner sees his plays as part of a political movement.

“What I found in the audience response is a huge hunger for political issues and political discussion,” Kushner once told Mother Jones. “So I always wonder: Is it that Americans don’t like politics, or is it that so much theater that is political isn’t well-done?

“. . . I would hate to write anything that wasn’t [political]. I would like my plays to be of use to progressive people. I think preaching to the converted is exactly what art ought to do.

“I am happiest,” he continued, “when people who are politically engaged in the world say, ‘Your play meant a lot to me; it helped me think about something, or made me feel like I wasn’t the only person who felt this way.’

“It’s the way you feel when you go to a demo, which is the only way to keep sane a lot of the time. You need to remind yourself there are many bodies who are as angry about something as you are.

“When I teach writing, I always tell my students you should assume that the audience you’re writing for is smarter than you. You can’t write if you don’t think they’re on your side, because then you start to yell at them or preach down to them.”