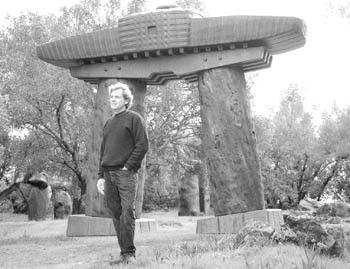 SCULPTOR Bruce Johnson isn’t interested in lounging inside, huddled in front of the television set this chilly Super Bowl Sunday afternoon. He’s where he loves to be–outside in the bracing January air roaming among the living oak trees and the giant chunks and columns of redwood that form his bold art pieces.

Striding in his blue jeans and work boots across the mossy rocks at the sculpture garden at Santa Rosa’s Paradise Ridge Winery, Johnson, 53, is the quintessential outdoorsman with his rosy-tanned face and unruly fair hair. He bends to remove some leaves from one sculpture and runs his weathered hand along the deeply ridged monolith.

“These ancient chunks of wood contain spirit and bear centuries’ witness,” he says. “I peel away the dirt and rot and look to the mass, form, and texture to inspire and inform the sculpture.”

Johnson is an artist and craftsman who uses a chain saw and other tools to create sculptures from salvaged old-growth redwood stumps abandoned by loggers decades ago. His work can be found at the Oakland Museum and in private collections from Italy to Taiwan. But this afternoon he’s inspecting his “Old Growth–New Life” exhibition at Paradise Wood Sculpture Grove.

The outdoor exhibit is the culmination of 25 years of experience, 18 months of labor, and 200 tons of raw materials. Described as an interplay of the forces of art and nature, it features a trickling fountain, a Zen garden, an Asian-inspired gate, a round bell tower, and more–all fashioned from redwood and copper.

This month Johnson will participate in a three-day artist-in-residence program at Santa Rosa Junior College. During all three days, he will use his chain saw to sculpt a huge piece of redwood in front of Analy Hall, the college’s art building. The artist will present two lectures: “The Chain-saw Lecture” and a slide-show presentation titled “Discussion on Redwood Aesthetics and Ethics.” And he will lead a tour of the Sculpture Grove exhibit.

For the SRJC demo, Johnson will employ a number of different tools. “There’s one just right for each move,” he enthuses, rattling off names of various trimmers and sanders–names like “Log Wizard.”

Chain-saw art has its dangers. With a wry grin, Johnson holds up his left hand–half of the left pinkie finger is missing. The bloody result of a run-in with a joiner in Fort Ross, he explains with a shrug. To him the end result is worth any physical pain.

Johnson says his sculptures are “small acts of preservation,” because he salvages the large scraps and chunks of old growth that aren’t of much value. “The logs really aren’t worth anything,” he says. “Some have too much rot in the middle or have too many knots.” For the bulk of this show he has used pieces from 200 blocks of redwood salvaged from Crescent City.

The Timber Cove-based artist adds he has no set design in mind when he begins to work on a piece of redwood. “Part of the process is cleaning up the material,” he explains. “You don’t know what you have until it’s cleaned up.”

He describes his work as a cross between Shinto shrines and Stonehenge–metaphors for man’s impulse to mark a place and for the human being’s mystical connection with nature.

Indeed, the looming wooden sculptures here with their happily married tones of redwood and copper seem to radiate a strange combination of pagan and futuristic energy that resonates with their outdoor setting.

There’s a curved monolith crowned with copperlike fish scales along its top and water trickling below. Another large piece is reminiscent of an ancient flying machine with a seat from which you can peer through a hole and view the North Star. And there’s a bell tower carved from a burned-out tree truck.

The pieces–which sell for around $50,000–have already attracted some buyers. A 16-foot-tall sculpture titled Wood Henge will be going to a private collection in Italy. And local Telecom Valley millionaire Don Green has bought Understanding Matter–a Map of the Cosmos, a modern redwood sculpture entirely encased in hammered copper, for his Santa Rosa home.

In addition, Johnson says, the Asian-inspired Sacred Portal may be eventually donated to the $43 million Don and Maureen Green Music Center at Sonoma State University, currently under construction.

Johnson says his work is ultimately about natural instinct. “I need to measure with my arms as well as with my mind,” he explains, “and ask myself how I feel about a piece rather than how I think about it.”