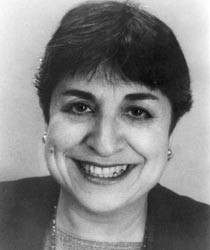 TEARS AND LAUGHTER seem at war in Emily Shihadeh’s voice. Again and again, emotion rises to color her words as she discusses her intensely personal one-woman show, Grapes and Figs Are in Season: A Palestinian Woman’s Story. “It’s a real story, my story, nothing make-believe,” she explains, speaking by phone from her home in San Francisco. “It’s what happened in Palestine through my eyes.”

Her upcoming appearance at Sonoma State University is far from the first time Shihadeh has been onstage with this intimate material. For eight years now she has toured the country, and indeed the world, performing in San Francisco, at Harvard and Yale universities, and in Tel Aviv, touching and entertaining audiences with Grapes and Figs. Part comedy, part drama, part musical act, the work is rooted in Shihadeh’s immigration to the United States in 1958 and eventual return to visit her family in her hometown of Ram Allah in the West Bank. But despite her years of experience performing the one-hour piece, it clearly still affects her deeply.

It’s not hard to understand why.

The work mixes stories of her childhood–snippets from a life that began in the midst of one of the most enduring conflicts of the century–with the reflections of a mature woman who has weathered the effects of war, immigration, and divorce.

But humor is also a big part of Grapes and Figs. After all, Shihadeh got her start on the stage by performing stand-up comedy in San Francisco clubs, and that shines through both in her quirky sense of humor and in her eclectic performance piece. In one segment, she uses a rap song to satirize the widespread ignorance she says she has encountered in America about Arabic people.

That’s not to say that Shihadeh doesn’t like the United States. In fact, she says, she fell in love with America before she ever set foot in the country. A group of Quakers from the states settled in Ram Allah and exposed the village to such pop culture icons as Doris Day and Rock Hudson. “They came and they liked our town, so they stayed and built homes and schools,” she says. “My grandfather liked them so much that he became a Quaker.”

BUT SHIHADEH’S childhood spent among Quakers and the fruit trees in her father’s yard (which gave her piece its title) was shattered by the onset of war. When she was 7 years old, a nearby hotel was blown up in the fighting, and her father decided the family had to flee the village. Later, at age 17, Shihadeh moved with her husband to the United States, where she saw her first traffic light and encountered a confusing new world.

Above all, Shihadeh hopes that her show promotes understanding and reconciliation of the Palestinian-Israeli conflict. To that end, she holds a half-hour discussion after every show. Despite the focus on this controversial issue, she says, her piece has been well received by a wide variety of audiences.

“Everybody loves the show,” she says. “It’s a universal story. We all want to love and be loved.”