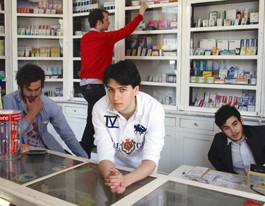 As much as I’ve loved hip-hop, the mainstreaming of urban culture has always disturbed me in its glorification of poverty and the hardening it engenders, intentional or not. Over the decades, inner-city cries for help have grown silent, morphed into stylistic posturing and the addition of “rapper” to the too-short list of “ways out of the ghetto”.

Thank God for Vampire Weekend. With their 2008 debut (and song titles like “Oxford Comma”), the quartet of ex&–Columbia students enjoyably conveyed the strengths of being wealthy, educated and cultured. They’re not Updike or anything, but their unique blend of jangle pop, string arrangements and African polyrhythms, coupled with singer Ezra Koenig’s vibrant tales of Ivy League life, portray the singular joys of a privileged, sophisticated upbringing. Their honesty is not only gutsy but also, let’s admit it, refreshing in the “indie” world, and theirs remains the greatest American debut album since the Strokes or Kanye West.

Released this week, Contra is a worthy follow-up, although not as immediately catchy. What’s clear from opener “Horchata” is a denser palette and more in-your-face production. In place of the familiar taut arrangement is a tropical xylophone along with a soukous beat and chorus, while Koenig’s voice booms and echoes through a yarn on the East Coast’s migration to warmer locales. The synthesized “White Sky” continues the impressive shunning of their usual guitar slink, before picking it up for the rollicking “Holiday,” which sounds like a first-album outtake.

Koenig’s pleasingly fluttery vocal melodies are intact throughout Contra, but VW are eager to experiment with electro flourishes, especially on “California English.” Over a brisk calypso rhythm, Koenig sings in auto-tune through a rapid, acrobatic flow that covers “private schools” and “skiing in the Alps.”

Another highlight is the six-minute “Diplomat’s Son,” an epic smorgasbord of the Vampire formula and world-music styles from dancehall to West African guitar. Fittingly, the tempo-shifting masterwork samples M.I.A., an ally in the musical globalization game. Vaguely spooky closer “I Think UR a Contra” sounds like Radiohead in its proglike melancholy, hinting at even more depth directly.

While Contra isn’t as wholly essential as Vampire Weekend, it expresses a creative restlessness that’s the best sidestep of the sophomore slump, confirming VW as the most exciting band of the moment.