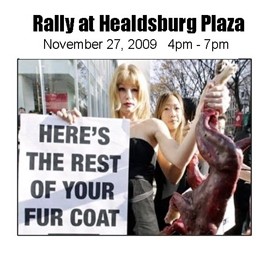 A teenage vegan activist involved with PETA has been served a restraining order by the owner of Cyrus Restaurant in Healdsburg due to defamation and threats over the restaurant’s serving of foie gras.

The teenager, a 16-year-old male who dresses and lives as a female, appeared in court on Dec. 28 after Cyrus chef-owner Douglas Keane filed the restraining order. Key to the case is an incident on the afternoon of Dec. 18, in which the minor was shouting through a megaphone and distributing animal-rights pamphlets on public property in front of the restaurant.

In a police statement, the minor alleges that she was pushed and hit with brooms by a group of Cyrus chefs, and that Keane himself pushed her and said, “You want to trash my restaurant? This means war!” She also charges that Keane “personally attacked” her, and that “everything [she] did . . . was an act of self-defense against their attacks.”

Keane denies these allegations, and says he has a witness who can verify that in fact one of his cooks was elbowed in the nose while another was punched in the arm by the minor. Furthermore, Keane, who underwent surgery for a brain tumor five years ago, went to the emergency room to be treated for nausea and headaches after the minor shouted “You are a horrible person” through her megaphone directly into his ear. The minor was arrested by police and released to her parents, but returned to the restaurant later that same evening.

The incident capped a series of protests beginning in November, in which, according to the lawsuit, the minor shouted to patrons that Keane “engages in bestiality and is a fat, disgusting human being” and that he serves “decaying and diseased food” at Cyrus.

She sent Keane an email on Dec. 8 that read, in part, “You sick fuck! You are a disgusting fat lard of an animal abuser. All that foie gras goes to your fat thick thighs. You fucking fatass. I hope you die from some dreadful liver disease, it would avenge these animals that you help torture.” Furthermore, according to the case, she has repeatedly called Keane to say, “I know where you live, I will make your life hell,” and once allegedly threatened to set fire to a restaurant guest’s coat.

Cyrus, a high-profile restaurant with two Michelin stars, offers eight- and five-course vegetarian menus, and diners are encouraged to call the chef directly with any special dietary needs. Contacted at Cyrus, Keane says that he takes the issue of foie gras seriously. “I was using Sonoma Saveur’s foie gras for a while. I took a trip down there with a few managers,” he says, “and walked away 100 percent comfortable. And I’m even more comfortable with Hudson Valley [Foie Gras]—they’ve actually hired a vet on staff and an independent auditor.”

Keane says when he discussed his foie gras supplier with other protesters, they agreed to leave, but the minor became fixated on him personally. “I think this is just a misguided youth with a lack of parental control,” he says. “Every other protest I’ve ever had, every other email from any sort of animal-defense group, they’ve all been very appropriate.”

Meanwhile, on Dec. 30, the minor was awarded a “Star Street Teamer” award from PETA2, the animal-rights group’s youth division. At the time, PETA2 assistant director of Youth Outreach and Campaigns Dan Shannon saluted the minor for having “all the qualities of a great activist: compassion toward the most vulnerable members of society, energy, determination and know-how.”

When contacted, Shannon stated he hadn’t heard about the case and expressed surprise and dismay at the minor’s actions against Cyrus. “This is not the sort of thing that we would reward somebody for or would endorse in any way,” he says. “We advocate a professional, friendly approach to the issue, even when people don’t agree with one another.”

Still, Shannon would not say whether the award would be revoked, or if the minor would be contacted or reprimanded by PETA for her behavior. “Like any other organization, we don’t have any control over what our members do,” Shannon says. “It’s like if somebody from the NRA goes out and shoots somebody, what’s the NRA to do?”

Shannon stresses that the award was for the minor’s work in successfully convincing Bella, a Healdsburg women’s clothing store, to stop selling fur. Last year, on the day after Thanksgiving, the minor led a loud demonstration with banners and a megaphone in front of the store; a follow-up call by PETA confirmed the store was no longer carrying fur.

But Bella owner Cathy Boitano-Grande says she had already stopped selling fur at the time of the protest, and the items in question were faux-fur acrylic gloves. “I took the basket of gloves out, and I showed them to her mother,” Boitano-Grande says, “and I said, ‘I want you to know what your daughter’s doing. She’s standing here in the name of animal rights, and she’s a liar.'” Boitano-Grande summoned the police, but was told that the protesters were within their First Amendment rights.

For his part, those are rights that Keane insists he respects. “I know it sounds weird, but I didn’t want to stop anyone’s right to expressing their opinion,” he says of the restraining order. “I just think this person—it’s a sad situation. I hope they can work through their issues.”

Note: This article reflects a subhed correction from “transvestite” to “transgender” after numerous emails and a call from GLAAD corrected the error.