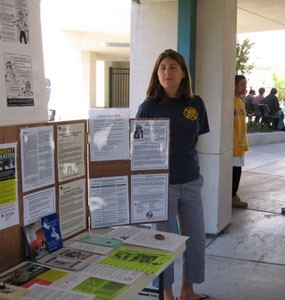 Solitary Youth: Katie Falbo, 22, is the youngest person in the Sonoma Valley’s Peace and Justice group by some two decades.

Walking into her first Sonoma Valley Peace and Justice meeting, Katie Falbo realized she was the only one in the room without any white or gray hair.

“I thought it would be kind of awkward at first, but they’re all really nice people and they’ve all been really welcoming,” says Falbo, age 22. “I definitely have more physical energy than a lot of them, but mentally, they know way more than I do.”

Falbo’s youthful presence within a dedicated group of older activists highlights the fact that the folks gathering for weekly peace vigils throughout the North Bay tend to be from the baby boomer generation or older. And Falbo’s involvement in her hometown of Sonoma is temporary; she’ll be moving to San Diego soon.

So why aren’t more young people attending the vigils or participating in other antiwar activities? The answers aren’t clear-cut. It could be they’re too busy trying to establish their lives; it might be that the war and a potential draft haven’t yet personally touched the majority, or they may be involved in ways less visible than weekly vigils.

“Kids do come by and say, ‘Yeah, you’re doing great,’ and join us. But they don’t seem to have a committed attitude toward it,” says Audrey von Hawley, 67, a member of Sonoma Valley Peace and Justice and a frequent antiwar vigil-keeper. “Around the start of the Iraqi war they had a march to Sonoma Plaza. Then they seemed to lose interest.”

In addition to Falbo, Sonoma Valley Peace and Justice has about 20 active members and approximately 180 on its e-mailing list, von Hawley says. “The oldest person is 83. A young person would be in their 40s and 50s. The average age is probably in the 60s. We want younger people involved. They’re the ones who will be here when we’re gone.”

On a recent Friday evening, von Hawley was unloading a large “Peace” flag from her car when a teenage girl on roller blades glided up and asked to carry the banner. Wearing a golden mask that covered her face, tight black pants and a spangled red top, the young woman proudly held the flag aloft.

“She just rolled up to the vigil waving my flag, and everyone laughed because she was such a vision,” von Hawley says. “She looked like a young goddess. I want that creativity, energy and beauty of youth to carry the torch.”

After a while, the girl returned the flag to von Hawley and rolled back to join her nearby friends. Von Hawley hopes the girl will attend other Friday-night vigils. But she also thinks younger people aren’t participating regularly because even though all young men have to register for a possible draft, the war hasn’t really touched them–yet.

“Their friends and family members aren’t dying. They’re concerned, but it’s not personal to them yet. In Vietnam, it was the draft. It was people dying, ordinary people dying, not just people who needed a job and who had to go in the army because they couldn’t make it in the institution called the United States.”

Falbo admits her involvement with Sonoma Valley Peace and Justice is atypical for her generation. She recently graduated from the University of California at Irvine, where she majored in Latin American studies. While there, she was president of the school’s Amnesty International chapter and involved with a campus peace and justice group.

Her parents asked her to come home to Sonoma for several months to help them prepare to move to Southern California. Instead of having to look for work, Falbo is able to continue her activism locally.

“Right now I have some flexible free time,” Falbo says. “But most people my age are so scared about the economy, they want to get a job right away, they want to go to graduate school, they just don’t have the free time.”

She says her childhood friends who still live in Sonoma are more concerned about securing a good future than about protesting the war in Iraq.

“I think there’s a lot of pressure on young people around the world, because they’re realizing that the middle class is shrinking everyday. We have a wide gap, and they realize that you’re either moving up or you’re down, and not many people want to be down. That’s a problem because you don’t have a lot of people who say, ‘OK, I don’t agree with this system. I want to change it, and I’m willing to sacrifice a salary for that.’ You don’t see that.”

Falbo is one of the few committed to making a difference. Many factors have influenced her. She grew up with her parents avidly discussing politics and world events around the dinner table. Her father was a Marine Corps pilot who became fed up with the military and resigned rather than retired. And her boyfriend is in the Marine Corps.

A 2001 graduate of Sonoma Valley High, Falbo’s boyfriend didn’t think he was cut out for college but got bored waiting tables in a local restaurant. Attracted by the promise of firefighter training, he enlisted in the Marines. Having paid careful attention to the fine print, he made sure he scored high on the firefighting exam. A buddy who joined with the same goal of learning firefighting didn’t do well on the test; he’s in the infantry, on his second tour of duty in Iraq.

Fortunately, Falbo’s boyfriend is stationed in Hawaii as an airfield firefighter with a strategically important unit that’s exempt from being deployed to Iraq. But his enlistment ends in December, and under military law, he can be called back to serve another five years–anywhere and in any capacity.

“He’s safer now than he will be in December,” Falbo says.

Falbo’s personal situation has been an asset to Hope Sonoma, a group of volunteers providing counter–mdash;military recruiting information at Sonoma Valley High.

The federal No Child Left Behind Act requires schools to give students’ contact information to recruiters; Hope Sonoma was founded three years ago to get the word out that parents could “opt out” of having their child’s address and phone released to the military. Now Hope Sonoma volunteers, including Falbo, visit the campus weekly in an attempt to balance the military’s hard-sell recruitment tactics.

“We’re trying to inform students about other possibilities and options for funding continued education after high school graduation, and that there are careers that are peaceful rather than violent as in the military,” says Magrita Klassen, one of the group’s cofounders.

Falbo’s youth and her personal knowledge of the military are a plus, Klassen says.

“I wish we had more like her,” Klassen says. “The problem in attracting [volunteers] is that most people are working or are going to school and they can’t come down on their lunch hour. It usually turns out to be our little gray-haired selves who show up.”

Although senior citizens tend to be the most visible peace activists, people of all ages are involved, says Elizabeth Stinson, director of the Peace and Justice Center of Sonoma County.

She noted that Casa Grande High School has a student-run group providing anti-recruitment information; El Molino High School has a youth-run diversity club; and Healdsburg High School students have taken charge of the counter-recruitment duties. And there are young adults active with the Free Mind Media Guild and Food Not Bombs, Stinson says.

Falbo agrees that young activists are less visible than their elders, often because they’re involved in on-campus efforts and don’t have the time or energy to add community gatherings to their schedules. But she thinks young people will begin more public protesting when they realize they will be the ones to foot the bill for this war.

“We’re going to pay for it in more ways than one–not just economically, but through education and the other things we are sacrificing in this country to fund the war.”

There won’t be more young people protesting until the war becomes more real to them, Falbo says, either through the draft, the deaths of friends or when the actual costs hit home.