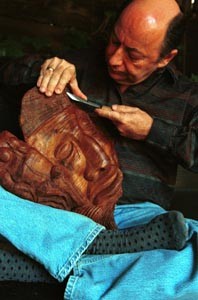 HOLD ON, HUMANS. A revolution is coming. When it strikes, you’ll know it, because this revolution will dramatically change the direction of our country, the world, and probably the human race. Unfortunately, we may have to wait for it. See, most of its leaders don’t even know it’s happening yet.

That’s right, the revolutionaries themselves are not aware of their part in the revolution. And according to anthropologist Paul H. Ray and psychologist Sherry Ruth Anderson, it is that very lack of knowledge that is delaying the inevitable explosion. If the bold revolutionaries only knew that there were other revolutionaries out there–50 million of them–all separately dreaming of a brave new world, well . . .there would be no stopping them.

But alas! They remain unaware: unaware of each other; unaware that they are, already, a significant part of the movement that could end up being the most important sociological evolution of the New Millennium; unaware, even, that they already have a nifty nickname.

They are the Cultural Creatives.

Named and identified by Ray in a 1996 report titled “A Study of the Emergence of Transformational Values in America,” the Cultural Creatives are apparently an emerging force of disparate but ethically similar people–passionately altruistic, devoted to social justice, and deeply concerned about the environment–that is growing exponentially across the planet and is already having an irreversible impact on global society.

These conclusions are based on 13 years of survey research studies by Ray, executive vice president of American LIVES Inc., an opinion-polling firm researching the values and lifestyles of Americans. The findings are meticulously and entertainingly revealed in The Cultural Creatives: How 50 Million People Are Changing the World (Harmony; $25), co-authored with Anderson, co-author of the best-selling The Feminine Face of God.

The married duo, who live in San Rafael and speak Dec. 6 in Sonoma, are just now wrapping up a months-long speaking tour to promote the book–and to sound the wake-up call to latent CCs everywhere.

These people, say Ray and Anderson, will be the shapers of a whole new agenda for the 21st century.

Anderson and Ray, holding forth in the living room of their comfortably book-crammed, art-filled home near Dominican College, are articulate and authoritative on their subject. Asked to define the average Cultural Creative, they refer to the 18-point checklist at the front of their book.

According to the list, the anything-but-average CCs–of which the authors are themselves more-or-less typical–are lovers of nature “deeply concerned about its destruction,” are unhappy with both the left and the right in politics, are working to ensure equal status for women, tend to be distrustful of media cynicism, and are rather optimistic about the future.

Hmmm. Environmentalism, social justice, equality for women; on first pass, it kind of sounds like “Cultural Creative” is just another way of saying “Liberal.”

Not so, says Ray.

“Cultural creatives are no more likely to be liberal or conservative than anyone else in the population,” he insists, citing the studies. “The highest percent, like 45 to 48 percent, something like that–are none of the above, neither left nor right.”

“The reason it matters is because these are people who care,” she says. “They want to make a difference.”

If Anderson and Ray’s predictions are correct–that the CCs will step in to act as midwives for the next level of human sociopolitical achievement–they will have to get organized pretty soon. Does that mean there will one day be a Cultural Creative political party?

But first they’ll have to come out of the closet.

And that might not be a simple maneuver. Because of course, they still don’t know they’re a movement yet.

“Right now, if you ask any one of them, the Cultural Creatives will tell you, ‘Oh, maybe 1 percent of the population agrees with my values,'” says Ray. “They’ll say, ‘Five percent at the most.’ I’ve had focus groups where people have said, ‘I don’t know how you got so many of us in a room together. I thought it was just me and my friends who had these ideas.’ ”

“Since the ’60s, we’ve had 20 kinds of new social movements, consciousness movements, and trends,” says Anderson, “and those have, basically, been the seedbed from which the Cultural Creatives have come. But in the ’80s, people in these movements started to say, ‘Hey. Where did everybody go?’

“They didn’t go anywhere. They became the Cultural Creatives.”

Such is the worldwide Zeitgeist, say Anderson and Ray, that these proto-CCs have since been joined by others. Many others. And the American members have now been officially outnumbered.

“There are 50 million Cultural Creatives in America,” Ray says, again citing the studies described in the book, “but there are 80 or 90 million in Western Europe. They’ve been growing steadily since the ’60s, a very slow growth process, about a half a percent a year. When I started this work 13 years ago, the Cultural Creatives were around 18 to 20 percent. Now they’re at 26, and I expect it will be half the population in another 10 years.”

At which point, the movement will break on through to the surface.

“Then,” says Ray, “there will be major changes.”

By that time of course, the Cultural Creatives–and everyone else on the planet Earth–will know exactly who and what they are.