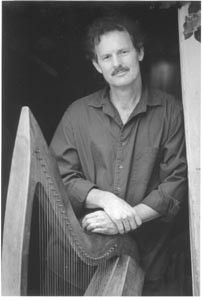 Stories to tell: Patrick Ball, who has emerged as one of the leading interpreters of the music of Turlough O’Carolan, presents a one-man show this month based on the celebrated works of the Irish bard.

THE TWILIGHT cast ghostly, gray-blue shadows in the crisp autumn air; the voices came reassuringly. Patrick Ball sat in the audience that night 20 years ago in Johnsborough, Tenn.–site of the largest storytelling festival in the United States–listening intently while local folklorists spun Appalachian tales at a benefit for a colleague injured in a car accident.

“It was the first time I ever heard anybody tell a story to a lot of people gathered together,” says Ball, a 50-year-old Sebastopol resident. “It didn’t really seem much like a theatrical experience. It was more like a warm, intimate sort of exchange.”

It was enough to convince Ball after his graduation from Dominican College in San Rafael (with a master’s degree in Irish history) that being cooped up in a stuffy classroom was not for him. “It’s the nicest job I’ve ever had,” Ball says of the lucrative career he has created as an actor, storyteller, and Celtic harpist.

He returns to the Spreckels Performing Arts Center on July 13 for a three-week run of O’Carolan’s Farewell to Music, Ball’s acclaimed one-man play showcasing the music and lore of the blind 18th-century Irish bard Turlough O’Carolan. Ball co-wrote the play with Peter Glazer, the writer and director of Woody Guthrie’s American Song.

“Hauntingly beautiful ballads and lilting storytelling,” the New York Variety opined. “The play might spring from the 17th century invasion of Ireland by England, but seems as current as the latest troubles in Belfast. [Ball’s] acting is fine, his musicianship outstanding.

“Ball and Glazer have created a small gem.”

In many ways, Ball is particularly suited to bringing the O’Carolan tale to the stage, since he is one of the few people alive to have mastered the difficult instrument and has a real affinity for the late bard. “When it came to writing the piece,” he says, “I wanted to be able to put the dilemma in front of the audience of how this man, who was not only blind and had his own personal darkness but probably lived during the darkest time in Irish history, could write such beautiful uplifting tunes.”

After his first encounter with the storytellers in Tennessee, Ball–who seemed destined to become an attorney, until the death of lawyer father–pursued his craft with a passion. After hitchhiking around the United States, he spent 18 months studying Appalachian lore at the Penland School of Crafts and spent a year in Ireland researching Celtic oral history. He then returned to the North Bay, where he lectured in public schools.

While the traditional lore of the Appalachian Mountains and Western Europe has been committed to writing, it is the “rhythmic charm and poetry of the phrase” that intrigues him. “I love the dialects, the turn of phrases, the clever expressions,” says the soft-spoken Ball. “If you go back to the Appalachians now, people have a colorful way of talking, and it’s the same way in rural parts of England and Scotland.

“I wanted [through my storytelling] to be able to present a show that had that same sort of charm. A lot of my friends specialize in stories where the importance and significance is of psychological value [as in the underlying human emotions of fairy tales]. But my approach is a little different.”

One unusual aspect of Ball’s performances is his use of a Celtic harp “to create an atmosphere where people are receptive to hearing the older stories,” he explains.

Ball’s own introduction to the instrument came a year after he began his career as a professional folklorist. He first heard the distinctively bright, chiming tone of the instrument in 1980, while visiting the Renaissance Pleasure Faire. There, Ball met Jay Witcher, a former aerospace engineer-turned-master craftsman of folk harps.

The 32-string, four-and-a-half-octave instrument, which dates back more than 1,000 years, is gracefully carved from wood, strung with brass wire, and plucked with the fingernails–characteristics that lend it a considerably different tone than that of its concert cousin.

Over the years, Ball has recorded several albums of Celtic harp music; his 1983 debut, Celtic Harp 1: Music of Turlough O’Carolan (Fortuna), showcased the works of the Irishman who has become his muse.

INDEED, Ball’s concert and recorded material has always drawn heavily from the poignant songs of O’Carolan, who roamed the rugged Irish countryside on horseback. O’Carolan, considered by many as the last of the Irish bards, composed nearly 250 songs, which were transcribed and preserved by a Dublin musician.

“O’Carolan was influenced by the Italian and Baroque musical influx that swept Ireland at the turn of the 18th century. I frankly think his stuff is still beautiful,” says Ball, who once used the songs for the 1987 score of The Ugly Duckling, a Windham Hill/Rabbit Ears children’s recording narrated by Cher. “One of the reasons I learned to play the harp was so I could play his music.”

By mixing storytelling and music in a show of Irish wit and charm, Ball has created an alluring one-man tour de force. “It’s an art form, in a way,” he says. “But it’s also just simple human exchange. What I’ve always liked about it is that there’s an intimacy and a directness, which is good theater if nothing else.

“I don’t feel as though I have any particular message. It’s simply the charm of what used to be a common occurrence.”