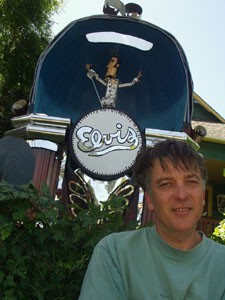 Walking into Sebastopol sculptor Patrick Amiot’s backyard is a little like walking through the doors of the Wonka factory. Past the gigantic Lucky market sign, past the stacks of rusty junk, partially finished sculptures crowd the patio. There’s a 3-foot-high garbage truck, the cab of which will soon be occupied by painted percolators standing in for a local garbage mogul and his family.

There’s an oil drum that is slowly becoming a gigantic wolf head, maw wide open and tongue lolling out, providing a stage for a future Little Red Riding Hood. There’s an Airstream trailer, propped on end that Amiot plans to turn into a “Doggy Diner”–a 15-foot-tall puppy with a food-serving window in its belly.

These sculptures, as well as those in yards along Sebastopol’s Florence Avenue and throughout Sonoma County, are all garishly colored, and somehow not as safely “cute” as much of contemporary folk art–there’s something just a little bit naughty about them. It’s almost as if they might sneak up behind more refined sculptures and give them a wedgie, running away giggling like five-year-olds.

Amiot (whose name, he says, is pronounced “like ‘amigo’ without the g“) almost fits the Willie Wonka part. Energetic and filled with a childlike rambunctiousness, he leads me on a whirlwind tour through the yard and into his house, gesturing excitedly at each work-in-progress with the occasional conspiratorial lift of the brow. Once inside, it becomes clear that his sculptures are actually an extension of the wild, colorful and cartoonish world in which he lives. Amiot’s house is so packed with the oddities he and his family make, it seems they simply exploded out the front door one day, and from there began the surge toward countywide lawn domination.

We eventually settle into homemade chairs in his backyard–mine is crimped out of feed-store signs, his a macramé of bicycle inner tubes–and Amiot points out the piece that, two years ago, started it all. It’s a gigantic fisherman, his torso made from the hull of a rowboat, grinning wildly and holding up a prized catch. Before moving to Sebastopol from Vancouver, Canada, Amiot and his wife, Brigitte Laurent, were full-time ceramic sculptors whose Mad magazine­like clay caricatures supported a workshop of five employees. But after moving, they found that Northern California just didn’t have a market for their ceramics.

“I was thinking I was going to sell the house because my finances were so poor. In a sheer moment of depression, I just said, ‘Oh, the hell with it, I want to do something big,’ which I’d always wanted,” Amiot laughs ruefully, remembering the rough time. “Ceramics is so confining! So I got this rowboat at the flea market for 50 bucks . . . and I thought, ‘I’m going to do something totally wild, and I’m going to put it in front of my house.’ And the next day, oddly enough, people kind of slowed down and smiled and gave me thumbs-up.”

In fact, the response was so positive, that Amiot just kept going, populating his neighbors’ lawns with the whimsical weirdness now pouring from his head. “It was only eight months after I did my first piece that somebody actually commissioned me. And right after that, I sold my first one.” Almost by chance, he had happened upon his new market.

“I owe a lot to my neighbors, because they’ve offered me a gallery–prime real estate,” Amiot enthuses. “It’s so great because I have the pleasure of seeing my work and they enjoy having art and interaction with people coming off the street waving, smiling, people walking up and down.”

Amiot is also proud that his outdoor gallery is helping to rebuild a feeling of community on his street. “There’s a whole new culture now, a whole different type of ambiance, out on the porch,” he says. “And the neighbors feel the same way–they sit on their porches and people smile at them and say, ‘Hey, how’s it going?'” He gives a pinch-me-I’m-dreaming cockeyed grin. “Even the cops wave to me!”

This feeling of small-town community also extends to Amiot’s own backyard. Over the course of our hour together, two people randomly show up to visit, and one of them, a 40-ish male friend, winds up jumping gleefully on Amiot’s trampoline.

“You’ve been wanting to do that for a while, haven’t you?” Amiot asks him. “Yes!” exclaims the friend midair, continuing his leaping. It’s almost as if Amiot’s world gives people permission to revert to a childish freedom, something he hopes his art can help spread.

“I think that most of us are afraid to show our colors,” Amiot muses, “because putting up a piece of art is a big statement. It means that you have a sense of humor, that you’re willing to play and expose something about you that’s not generic. All these new communities are gated and everything is the same, even the same cars, all gray and beige and nondescript. And all of a sudden you walk onto [Florence Avenue], and these front yards are pretty wild. It’s hard to keep a serious act when you’ve got something so whimsical and bold in front of your house, especially made out of junk.”

Though Laurent is less involved in the sculpture, Amiot wants to make sure credit is given to his wife and partner of 22 years, who continues to collaborate with him on all his ceramic and pop-rivet pieces, as well as some of the painting on the larger works. “Brigitte is my salvation, she’s the one who does all the coloring on my ceramics, she’s the one that keeps the balance in the house. If it wasn’t for her, I wouldn’t even be an artist,” Amiot says. Their gallery exhibits in Canada are billed under both their names.

Amiot admits he didn’t give much thought to the recycling aspect of his art for the first few projects, but these days, the fact that he is reusing existing materials is of utmost importance. “California is rich with junk–everybody’s got junk! I couldn’t believe it when I moved here,” he exclaims. “People have so much shit they have to rent lockers to put their shit in.” He shakes his head in disbelief.

“I get a rush every time I see somebody going to the dump, and they stop at my place and say, ‘Do you want this?'” he adds. “I don’t necessarily want it, because my driveway is a mess. But I do want to take it because it’s a statement. It’s a really important thing to me: you’re taking it from one very destructive and negative direction, and you’re transforming it into such a positive thing.”

There’s also a wonderful feeling of synergy that Amiot gets when working with junk: it’s as if the shapes and shadows take on a personality of their own, informing the work and building momentum. “We all have our certain rhythms,” he says. “Whether you’re a musician or a painter or a sculptor, it’s all about rhythms. My approach is very loose and very folky–I just stretch my arm out, and whatever I can see, it doesn’t matter what shape it is, I slap it on there, and for some reason it works. It works because I believe in it and I don’t want to think about it for too long. Because if I start thinking about it, I lose the whole rhythm.”

He grins. “One day I was welding on this big piece, and this lady walks up and she has two pieces of metal in her hand, and she says ‘Excuse me, sir?’ I’ve got my mask on, right, and I say, ‘What is it?’ and she says, ‘Do you need this?'” Amiot beckons her to approach and tells the stranger to stand stock still and close her eyes. “I weld it right on the spot,” he chuckles. “I thought to myself that this for me is the perfect example of letting the whole universe go through you.

“It’s a challenge,” he continues, “because we live in a culture that gets to be so precise–especially the computer world–there’s no more room for that freedom. And that’s been, for me, an incredible awakening. I feel relieved. I feel lighter than ever. I feel as if my worries have gone. Because there’s an immense wealth of junk, and as long as I can let myself be free, I can do anything I want.”