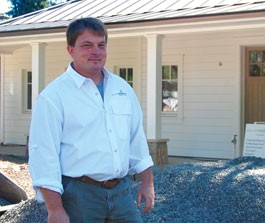 Photograph by Chelsea Lindsey TODAY’S LEED-ER: Contractor Rick Milburn is among the first U.S. builders to be certified as a Passivhaus consultant.

“Are we taking bets?” asks a man slouching outside the front door of Catherine O’Neill’s Sonoma home. “I’m betting on 0.16,” he declares. “Or lower.” He’s optimistic, but then so is everyone. This is the day that the team behind the Passivhaus retrofit of O’Neill’s house finds out not whether they have succeeded but how spectacularly. This is a game the production team knows they’re going to win. They’re just here to bask.

Contractor Rick Milburn strides around each room, shutting each window with a satisfying clumph. Someone else shuts the triple-layered, double-gasket front door. As the moment draws nearer, everyone clusters around energy consultant Bill Mattinson and his computer to see the final readout that will decide the verdict on the retrofit’s efficacy.

On the coldest day of the year, a Passivhaus can be heated by the energy equivalent of a 2,000-watt blow dryer. Both more efficient and simpler than other green building models, the Passivhaus (Americanized as Passive House) standard requires that a building meet three simple criteria. It must operate on a heating and cooling budget of no more than 1.4 kilowatt hours per square foot per year, use no more than 11 kilowatt hours per year of source energy and undergo no more than 0.6 air changes per hour at 50 pascals of pressure.

If the house passes the test, it will officially become the first successful Passivhaus retrofit in the United States. The whitewashed hall leading from the front door back to the hub of activity bursts with effervescence like the neck of a shaken soda bottle. These people represent a blend of instrumental players in the project, energy-efficiency builders from other firms and alternative-energy enthusiasts along for the ride. All of them will come away with a deeper, hands-on understanding of how a Passivhaus works coupled with “I was there when” bragging rights.

Builders meet Passivhaus standards by combining insulation, thoughtful incorporation of natural lighting and an appliance called an energy recovery ventilator (ERV). Passivhaus buildings are airtight, but that doesn’t mean the air is stale. Quite the opposite. The contained nature of the house’s internal space allows ERVs to control airflow by funneling old air out and new air in. But here’s the trick. As old air flows out, it passes its heat onto the new air, which recovers the heat energy and enters the house at a temperature cogent with the rest of the space. Current heat recovery rates fall between 75 to 95 percent, thus drastically reducing the amount of energy necessary to warm the house’s interior.

Besides conserving heat, the ERV extracts moisture, odors and noxious gases, and filters incoming air. Builders eliminate as many “thermal bridges,” or places where heat can escape from the house, as possible. Homeowners fond of throwing open the curtain and tearing up the sash to invite a summer breeze needn’t worry. Opening a window remains part of the fresh-air routine in a Passivhaus building.

When homeowner Catherine O’Neill approached contractor Rick Milburn about an eco-friendly retrofit, neither of them had heard of Passivhaus. In the course of researching other environmental building standards, Milburn stumbled across a mention of the Passivhaus in a magazine.

“At first, I was pretty skeptical,” he says. “In the green building world, there’s a lot of bullshit.” Skeptic or not, the article piqued his interest. Milburn traveled to Illinois and enrolled in a Passivhaus certification course. “I sat down between a guy who works on fuel cells for NASA and a Ph.D. from the local university’s science department. I thought, ‘Maybe this is credible.'”

Milburn was amazed when he discovered the three requirements necessary to qualify a building as a Passivhaus. The figure of 0.6 air changes per hour blew him out of the water. A typical house usually goes through somewhere between four and six air changes per hour.

“I thought it was a typo,” he smiles. “Then I realized they were actually achieving this.” Completely sold, Milburn finished the class and became among the first U.S. builders certified as a Passivhaus consultant.

When he arrived back in California, Milburn pitched the project to Jarrod Denton, an architect at Lail Design Group with whom he had collaborated on several previous jobs. Denton also remembers a suspicion of a misprint upon viewing promised Passivhaus standards. When he realized that Passivhaus buildings did indeed meet their specifications, he got excited.

“It’s really reverting to tried-and-true principles,” Denton says. “It considers the solar orientation of the house. Romans and Native Americans knew how to build based on climate. These aren’t new principles. Tape and insulation—there’s no rocket science behind that.”

Eager to learn as much as possible about Passivhaus and its growing community of subscribers, Milburn proposed that he and Denton attend last year’s International Passive House Conference in Germany. Only three American architects showed up. “[Europe is] 15 to 20 years ahead of us as far as energy,” Milburn says. “Passivhaus is the only system that meets the Kyoto Protocol, so that held Europe’s feet to the fire.”

Starting next year, the European Union plans to construct all new buildings according to Passivhaus standards. The U.S. currently has 50 certified Passivhaus buildings with a projected 50 more by the end of the year, while the EU boasts over 20,000.

“LEED is America’s best effort,” Milburn says of the U.S.’s most widely implemented green building standard. He remembers Europeans at the conference snickering at America’s devotion to LEED, a system in which buildings receive points for each checklist requirement they fulfill. Denton stands by LEED as an integral first step that has expanded the green building materials market. Hall Winery, a project he and his firm recently wrapped, is the first LEED Gold Certified winery in California and is 42 percent more energy efficient than an average building of the same size.

“[LEED] gets people talking about specific items that wouldn’t have entered the vocabulary otherwise,” Denton says. Lail Design Group is a pioneering force in local sustainable architecture with the first two LEED-certified gold wineries in California (Hall Winery and Cade Winery) on their résumé.

Passivhaus requires a set of design tools completely different from all other projects on which Denton has worked. “Typically, you have details you’re familiar with from past projects,” he says. “For this house, I had to throw the design kit away and start fresh. I had to put a fresh perspective on every detail. It was a ground-up project.”

Despite the learning curve, Denton says he appreciates Passivhaus’ fusion of three stringent energy requirements with creative freedom. He likens this interpretability of general rules to the Constitution. The founding fathers compiled a document of broad rules by which the country must govern itself, but the Supreme Court must interpret how best to apply these principles. Denton describes this as a “freeing experience. There is brilliance in the simplicity.”

Construction on the O’Neill retrofit began in October 2009. By May, the new and improved edifice was ready for its final blower door test. The event attracted devotees of green energy without ties to the project.

Larysa Tanya Shmorhay, a local educational consultant for homeowners, learned about the O’Neill house when Milburn and Prudence Ferreira, principal consultant at Integral Impact Inc. and certified Passivhaus consultant, visited her SSU class on green building. Like Denton, she too recognizes the similarities between Passivhaus design and ancient structures that were constructed according to their geographic location and its relationship to the sun. “It wasn’t until they developed electricity that they disregarded where the heck the sun was in the sky,” she says.

As soon as all the project contributors and green enthusiasts crowd into the O’Neill house to witness the final blower door test, Milburn gives the order to close all of the doors and windows. Then he turns on the machine that will pressurize the house. After an initial kerfuffle in which the house cannot reach the 50 pascals, or units of pressure, necessary to carry out the test and a voice from a back room confirms that someone left a window open, the team tries again. This time, they get their readout: 0.31. They have halved the requirement and passed the performance-based certification test with honors.

When asked whether he thinks Passivhaus is here to stay, Milburn responds with an incontrovertible yes. “There’s no question,” he says with a huge smile. “This is now. This is it.”