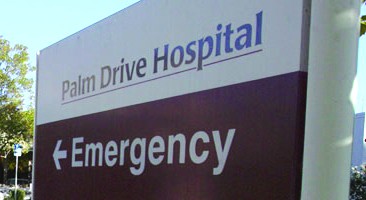 Sebastopol hospital likely to shut its doors by month's end

Sebastopol’s Palm Drive Hospital will likely close its doors by April 28 after the hospital’s board of directors voted Monday night, 4–1, to shut down core services at the cash-strapped facility. The board told a crowd of about 250 gathered at the meeting at the Community Church of Sebastopol that it had filed for bankruptcy protection earlier that day.

Hospital spokesman Marcus Young says the closure could last from three to six months, and the hospital might reopen as a different type of facility.

There are two proposals on the table: “One is a private surgery center that would look to offering some degree of emergency service,” Young says. The other, which Young has less detail about, is “more of a clinic-type operation.”

Palm Drive is a district hospital funded by taxpayers, which creates a different set of issues than if it was a private hospital. “If you look at the district hospital model across the country, this is the trend that’s happening,” says Young. Competition from Sutter, Memorial and Kaiser hospitals in Santa Rosa have drawn patients from the smaller Palm Drive, which offers fewer services. Palm Drive also has trouble keeping up with new, modern facilities and the equipment in larger, better funded private hospitals.

Palm Drive has seen a 30 percent drop in patients this year versus last. Forty employees were laid off in January, including eight nurses, and the hospital reduced its inpatient beds from 27 to 14. Last month, all employees at the hospital got notices of possible layoffs when the average number of patients per day was seven. So far this month, it’s 4.4.

The hospital is taking a $2 million loan from the county to transition the hospital into economic viability. The loan was necessary, he says, “in order to bridge to the closure.”

Officials said last week the hospital was losing almost $2 million a year. Palm Drive filed for Chapter 9 bankruptcy protection in 2007, when it was losing $500,000 a month and held $3 million in debt. It emerged from bankruptcy in May 2010 after selling bonds to pay off its debt, which by then had grown to $11 million. Less than two years later, in March 2012, the hospital announced it was running a deficit of about $850,000—instead of a projected surplus of $915,000.

Doctors and other employees offered suggestions on how to keep the hospital open during Monday’s meeting. “The board left that to be examined as they go through the process over the next few weeks or next few months,” says Young.

But he warned it might be too late for some of the suggestions. “It’s a district hospital supported by taxpayers, so there are probably issues of voting that need to be taken into account,” says Young. “That doesn’t mean it can’t happen; it just means it can’t happen within the three-week window.”

Asked if the public forum should have been held sooner, Young says the board didn’t foresee the steep drop in patients. “Even if they went into that process a year ago, it would have been a more difficult time to do that. Sometimes you have to get to a more critical point.”

Inpatient services at Palm Drive may close on April 21, and the emergency room is slated for shutdown by April 28. An ambulance will be stationed at the hospital for three months to assist emergency patients unaware of the closure. They’ll be transferred to other facilities.