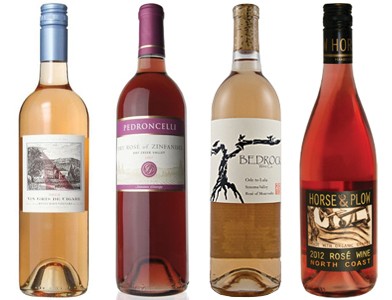 Drink rosé while the sun shines

Word is that demand for the rosé wine category is strong, so there’s little need now to lecture on its virtues. The hot tip today is “bespoke rosé.” That’s the term of art at Bonny Doon Vineyard, anyway, describing their pink wine made-to-order like a tailored suit. These crisp quaffs capture the zippy acidity and peak freshness of grapes that were picked just to be pink.

Bedrock 2012 ‘Ode to Lulu’ California Rosé ($20) Those unfamiliar with this style might think it suspiciously pale—pale like an arctic dawn that will not arrive, like a watered-down memory of salmon-pink, one part to 10. Like Blanc de Noirs. The nose is aggressively flinty, while calling up a memory of Baskin Robbins peach ice cream—the kind with the little frozen chunks of peach—at the same time. Surprising texture and stone fruit flavors hint at barrel-fermented Roussanne, but the cool, crisp fruit and fleshiness are just a tease that keeps the sipper sipping. 12.3 percent abv. ★ ★ ★ ★

Slang Wines 2012 California Rosé ($16) Made by Argot Wines, this pale Grenache-based beverage has a bit more color than the Lulu, with wild, real rose aromas and strawberry daiquiri, as smelt at arm’s length away. Pink grapefruit and underripe strawberry flavors quiver on a crisp palate, and what’s this—kettle corn, toasty oak? If there’s sizzling subtlety, this is it. An incredibly low 11.3 percent abv. ★★★★

Bonny Doon 2012 ‘Vin Gris de Cigare’ Central Coast ($16) Identical color as the Slang, crisp and a bit bitter like a can of fruit cocktail after the fruit is gone. The Vin Gris was a trailblazer, but this one’s so subtle, there’s not much to it. 12.5 percent abv. ★★½

Horse & Plow 2012 North Coast Rosé ($17) Sour cherry and scoury, like a Brut rosé without the sparkles. Much of the fruit comes from Testa Vineyards northeast of Ukiah, where they have made lemonade—pink lemonade—out of their roster of old-fashioned grape varieties. 68 percent Carignane. 13 percent abv. ★★★

Pedroncelli 2012 Dry Creek Valley Dry Rosé of Zinfandel ($12) Now, is this just an affected way of saying white Zinfandel? Nope, they’ve been making this since 1951. Bright pink, with sweet cherry chapstick aroma that builds in the glass, but ducks away as soon as it’s swirled. Dry, as advertised, with watermelon candy flavor. 13.9 percent abv. ★★★