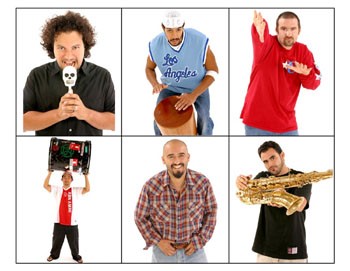 Monkey Minds: Ozomatli named themselves after the Aztec monkey god of dance.

Ozomatli set the roof on fire

At the time, it seemed like harmless fun. Last March, as they’ve done a thousand times before, the L.A.-based worldbeat funksters Ozomatli decided to lead partiers–in this case, clubgoers and music industry honchos visiting the South by Southwest music festival in Austin, Texas–into the streets for a moonlit samba-style dance line.

But Austin police felt that this activist band had violated the city’s noise ordinance, so they put a halt to the impromptu parade.

In the ensuing fracas, two band members were arrested. And when percussionist Jiro Yamaguchi hoisted his drum above the crowd in an attempt to discover what the commotion was all about, he inadvertently KO’d a cop, drawing a felony charge for assaulting an officer and facing 10 years in prison.

This summer, the three musicians pleaded no contest to reduced charges and agreed to commit no further offenses for six months in exchange for a clean record.

For a band known as much for their radical politics as for their danceable blend of Latin beats, hip-hop sensibilities and socially conscious lyrics, the arrests smack of irony.

“Well, we’re definitely more careful about where we play music,” says Yamaguchi by phone from the band’s L.A. studio. “The lesson learned is that [the melee] was a mistake and a misunderstanding. You know, you get thrown through the system, and, hopefully, on the other side, you end up OK.”

Now when Ozomatli sings about the man putting his boot on your neck, you can rest assured the band has street cred. Indeed, their roots are steeped in rebellion. The band started in the mid-’90s when founding members Wil-Dog Abers and Anton Morales (who has since left the band) tried to organize fellow California Conservation Corps youths into a labor union. The activists were fired, but in a legal settlement won the right to lease a Los Angeles community center that became a hub for politically informed musicians and community organizers.

“It was a very crazy, chaotic and creative scene,” Yamaguchi remembers. “But people took it upon themselves to make something better for their community. A lot of good things came out of that place, including a few bands. It was a very fertile spot.”

One of those bands was Somo Marcos, whose name paid tribute to the Zapatista rebels in Chiapas, Mexico. Not wanting to be too closely identified with any one political cause, the band later changed their name to Ozomatli, a reference to the Aztec monkey god of dance, fire and the jungle. “It seemed appropriate,” Yamaguchi says.

A 1996 trip to Cuba gave Ozomatli a chance to experience both Cuban music and the realities of a socialist society firsthand. “We went there knowing nothing about what to expect,” says Yamaguchi, “and ended up performing six shows at various places, from jazz clubs to a downtown Havana festival. It was pretty crazy how word of mouth travels.”

The experience helped to galvanize the group’s radical beliefs and solidified the young members as a cohesive band. “It really opened our eyes to another way of life,” he adds. “I learned a lot about music and resourcefulness. It was great to see how the Cubans live, the good and the bad of their society. It also helped to put things in perspective about what goes on in this country and those things that people here take for granted. You see the positive and the negative. “But we live in slightly different times now.”

What does Yamaguchi think of the right-wing dominated political landscape these days?

“You can get pissed off about the way things are–people tend to blame the external factors. But I think things are going to get worse before they get better,” he says. “There has to be some kind of release point at which things get really crazy and people come around to say, ‘Hey, we’ve got to check this.’ I guess that it’s not at that point yet and the powers that be are headed toward more clashes before people have finally had enough.

“The election might seem like a letdown, but it brought a lot of people together who are intent on making change. You can’t rely on the political system to change. The world I live in day by day requires me to check myself, and change has to come from within.”