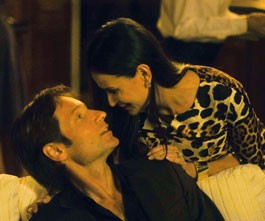 Kevin McNeely has been watching movies for months.

Hundreds and hundreds of movies.

“For a while there, I kind of went cross-eyed, watching so many films,” laughs McNeely, who is the director of this weekend’s Sonoma International Film Festival. “Fortunately, I love it. Watching films is such a rare opportunity to see the world through the eyes of all these filmmakers, to see what they see, to learn what they believe in and to hear their stories.”

This year’s version of the fabulous annual filmic fiesta, which runs April 15&–18, marks the 13th go-round for the homegrown festival. Formerly the Sonoma Valley Film Festival, it was last year gilded with the word “International,” in part to identify its status, carefully cultivated over the last several years, as a prime destination festival.

Last year, McNeely—who’s served as the festival’s board chair for many seasons—took over the reins from 2009 director Louisa Percudani. Admitting that last year’s festival was a bit wobbly and unfocused, McNeely is proud of the changes he’s ushered in for 2010.

“I’ve been involved with the festival since nearly day one,” he says, “and it’s something I feel very, very committed to—or maybe I should be committed. I feel like this festival is a beautiful ship that was foundering and needed to be righted. We’ve now got a wonderfully cohesive team that has been working hard at doing just that. This is going to be a very special festival.”

This year’s 74 films were selected from a combination of more than 600 outside submissions and from trips to large film festivals. With several venues operating within walking distance of downtown Sonoma, McNeely and company have put extra emphasis on world premieres this year (18 of them are scheduled), also slotting in a number of high-profile documentaries.

In fact, for the first time, the festival will blast off with a documentary on opening night. That film, Coals to Newcastle, follows the cult-favorite U.K. band the New Mastersounds on their 2007 trip to post-Katrina New Orleans. The New Mastersounds will make an appearance with the film, and will play the after-party as well.

Other notable films include Thursday and Friday night’s Outsourced, a romantic comedy about a Seattle call center that is outsourced to India; The Singularity Is Near, a mind-expanding documentary by scientist Raymond Kurzweil, who co-created the synthesizer; and The Joneses, a dark comedy about middle-class neighbors who turn out to be more than they appear, starring Lauren Hutton, Demi Moore and David Duchovny. Hutton is the focus of Saturday night’s tribute, which is hosted by Robin Williams.

With the exception of two films, every movie screened this year will be accompanied by one of the filmmakers or actors in that film.

“That’s always been a goal,” McNeely says, “but we’ve never come this close to doing it with every film we are showing. So that’s very special, and will make attending these screenings a lot more fun and interesting for everyone.”

Among the new attractions this year is a space at the Vintage House, which will be devoted solely to short films, and a screening area at the Sonoma Valley Museum of Art, where art-themed movies will be screened once a day, with special events accompanying them.

Another big new addition is the Back Lot, a massive plaza tent that will be decked out as a deluxe living room. “We expect the Back Lot to be a very lively place,” McNeely says. “The big topic of discussion, I think, is going to be, ‘Which films do we see?’ And that’s not going to be an easy choice. Our problem this year, honestly, was too many good films and not enough time-slots to accommodate them.”