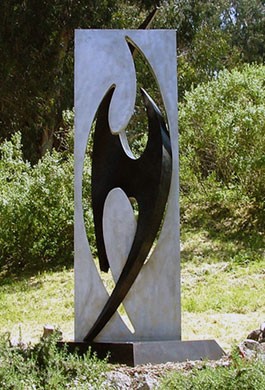 June is bustin’ out public art exhibits all over Napa County. Yountville recently installed several sculptures by Napa-based artist Gordon Huether. “He takes his inspiration from nature, and that’s why people can connect with them,” explains Napa Valley Museum interim executive director Ann Mosher. Mosher says that Huether selected pieces based on the sculpture’s compatibility with the location.

Yountville residents and visitors already seem enthusiastic about their beautified public spaces. The vice mayor has seen people posing for pictures in front of their favorite sculptures. But these spectacles are more than just a photo-op. “In cities with public art, restaurants are full, and people spend more money that goes toward cultural events. People are more apt to gather in public spaces,” Mosher says. The city hopes to continue and expand this program next year by including multiple artists.

Also kicking off a public art exhibition, the city of Napa hosts its first Napa ARTwalk, a public sculptural exhibition with installation scheduled for the week of June 14. This exhibit is also a contest. Napa residents and visitors will have the opportunity to vote on their favorite piece. Aside from a lone Oregonian, the featured artists all hail from California; six are from the Bay Area. As the artists were instructed to work with the theme of “Celebrating the Napa River,” local selections make sense. Santa Rosa sculptor Riis Burwell’s Bird is above.

“Local artists know Napa, know what the river means and understand what downtown Napa is like and what we need here,” says Arts Council Napa Valley acting executive director Kristina Young. “But a lot of people [in other areas] are dealing with similar issues like preservation of natural resources and revitalizing downtown.”

The Arts Council plans to implement an audio tour via smart phone applications. Although the project caused some initial anxiety over soliciting unknown art, Young says she is “thrilled” with the result, hinting that the pieces express a variety of artistic styles and will build a stronger sense of community downtown.

“Public art brings people together and gets people looking and talking about spaces in a new way,” Young says. “It’s something that belongs to the entire community, which is especially important to a downtown like ours that is in a major transition right now. It will be a reason for people to go downtown.”