.Keeper of the Flame 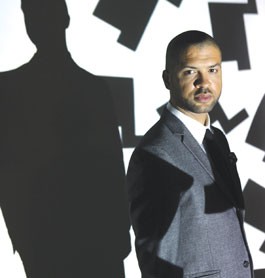 For all of its output, jazz is a hand-wringing industry. Nervous for its future and hesitant to consider that its apex may be in the past, jazz harbors constant questions about how to keep the music alive by enticing and involving a younger generation.

Answering this conundrum routinely revolves, like a circle of fifths, back to Jason Moran.

The 35-year-old pianist, who appears June 13 at the Healdsburg Jazz Festival, provides hope for jazz’s place among the young. He imbues his music with hip-hop, samples and spoken word, and has recorded songs by Björk and Afrika Bambaataa. He’s handsome and well-spoken, not to mention immensely, furiously creative on his instrument. He’s lassoed a meteor shower of rising star awards from Down Beat and was named Jazz Artist of the Year by Playboy.

And yet the lionized Moran, on the phone from his Manhattan home between tours of Argentina and Israel, says he doesn’t personally feel much pressure to bear jazz’s torch. “When I walk out of my house and I see kids coming from school, I say, ‘Damn, it’d be nice to see them at a show,’ but that’s about as far as it goes for me,” he admits. “I’m a pretty lazy person in an outreach way.”

If he’s lazy at outreach, he’s doing a great job at it accidentally. Despite a huge repertoire of original compositions, guest-starring on albums by artists such as Don Byron and Cassandra Wilson and playing constantly all over the world in Charles Lloyd’s New Quartet, he’s recognized outside jazz circles for something else entirely. Mention Jason Moran to friends, and most cite his piano recording of the hip-hop classic “Planet Rock.”

Moran recorded the Afrika Bambaataa breakdance anthem not as a conscious effort to convert the hip-hop generation to jazz, he says, but because he was “thinking really selfishly.” It’s simply one of his favorite songs, which he readily equates with standards like “Round Midnight”—the song that got him hooked on jazz in the first place—and “Body and Soul.” “‘Planet Rock’ actually means more to me in my history than those songs,” he declares, “because it is connected to how I grew up as an individual in the ’80s. It marks my time.”

Like many artistic visionaries, Moran’s concepts tend to outshine his immense talent. He’s recorded material from The Godfather Part II and from Akira Kurosawa’s Yojimbo. His “Gangsterism” series of songs is inspired by Jean-Michel Basquiat. Recently, for a Thelonious Monk tribute, he tracked down analog tapes of Monk having a conversation with his record producer and wove the audio into his stage performance, and for a song on his brilliant new album, Ten, he samples Jimi Hendrix’s guitar feedback.

These types of things garner attention. But Moran’s own inventive playing proves that his various conceptual projects and cover songs are no gimmick.

Ten is Moran’s greatest record yet, the sound of a one-of-a-kind pianist at home in his own style. In the past, Moran has shown susceptibility to blocky, clustered chords, rolled up like shirts tightly arranged in luggage. Ten finds Moran’s nimble fingers unpacking those clusters, breathing freer and moving unhampered. Nowhere is this emergence more evident than the album’s first track, “Blue Blocks,” which opens with a loping, descending figure; the image conjured is that of a hot-air balloon alighting on the earth. By the middle of the song, the scene has changed; passengers are running all over the ground, as Moran’s hands race excitedly and explore new territory on old keys with dizzying speed and clarity.

“I dare say it’s more honest than anything I’ve made,” he says of Ten, which will be released June 22 on Blue Note. “It’s a record that just is. Not that I feel that in my other records I’m trying hard or something, but I don’t have to strain my neck or flex my muscles as hard. I can just sit down and play now. I think in some of my earlier records, I was very conscious of trying to prove something to my jazz public and to my jazz police, and to the people that I played with, and to my teachers.”

One of those teachers was the great Jaki Byard, whose ability to combine barrelhouse stride piano styles with modern, angular inventions has clearly rubbed off on Moran. “Jaki really was heavy on discussing stride, and Earl Hines, and Teddy Wilson, these people like that,” he says. “But what he’d do when he was playing the music was he would flip it around and turn it backwards. His left hand would be in Harlem and his right hand would be in China. And he felt very comfortable doing this! It didn’t seem like anything difficult, it didn’t seem like he was straining or forcing anything. As a student of his, you see someone doing this thing really effortlessly, then you think, ‘Oh, this is just how it’s supposed to be.'”

Byard and another prominent teacher of Moran’s, the late Blue Note recording artist Andrew Hill, are represented with compositions on Ten, as are Leonard Bernstein, Monk and the early-century player-piano experimentalist Conlon Nancarrow. Three songs are commissions—from a festival, a museum and a ballet company—and “RFK in the Land of Apartheid” is from a soundtrack to the film of the same name. Yet despite being multi-sourced, Ten is effortlessly cohesive, a fitting anniversary present for Moran’s 10 fluid years with sidemen Tarus Mateen and Nasheet Waits.

Moran’s modernistic outlook continues even beyond this new record. “I have an idea,” he says determinedly. When Jason Moran has an idea, one listens.

Jazz covers of new songs have been proliferating: Vijay Iyer’s version of M.I.A.’s “Galang,” Brad Mehldau’s version of Radiohead’s “Knives Out” and the Bad Plus’ ever-accumulating interpretations of indie rock. And while Moran says he couldn’t find much benefit to the jazz/hip-hop experiments of the early ’90s as evinced in somewhat novelty albums like Jazzmatazz and Hand on the Torch (“Most of the stuff I didn’t even think was really that good”), he thinks the concept of jazz and hip-hop together has a place.

“One of the problems of trying to combine the forms is that jazz is really built on improvisation and hip-hop is really built on that beat,” he explains. “But if we got rid of some of the powerful elements of each of the forms, and reduced it to its purity, then we can try to find some common ground. So what I want to do is get MF Doom or Jay Electronica or Ghostface, and just play piano with them. No other instruments. Just try that. And how does that combination work? Or how will it not work? I want to hear what that is. I have to make that happen. I’ve been talking about it for too long.”

Until that day, Moran continues to travel both with the “bandwagon” of Waits and Mateen and with Lloyd, and he has nothing but praise for those he’s sharing the stage with at a not-to-be-missed lineup rounding out the Healdsburg Jazz Festival. “People that are playing the festival, like Gretchen Parlato, Taylor Eigsti, I see really great threads happening in their music, because they’re extremely conscious of where the music has been,” he says. “When I hear their music, it’s really clear that they see another path for it to go down.”

Moran’s own group will be joined in Healdsburg by Bill Frisell, the Grammy-winning atmospheric guitarist with whom Moran has played many times. “Frisell is as crazy as we are, as a player and a creator,” he says. “We’ve played on and off with each other, and each time we find new things to do with each other. He’s an open-palette kind of player—he leaves a lot of space, but he can also fill it up. He’s also really into letting songs and sounds exist.”

As long as songs and sounds exist, there’ll be an opening in jazz’s future. As a luminary of the music, Moran is living proof that if one adheres to but is not shackled by tradition, there’s no limit to what jazz can do. “I think of jazz history that way, or piano history,” he says professorially. “It’s just there, and it’s there for you to have fun with.”

Next ArticleMighty Max Drumrolls Into Petaluma