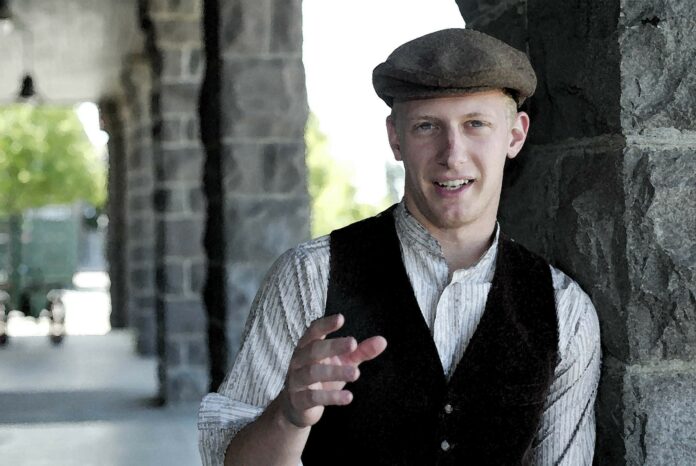 SRT sharpens the light in ‘Our Town’

Summer Repertory Theatre’s new production of Thornton Wilder’s 1938 Pulitzer Prize-winning play Our Town proves the theory that a single casting choice can mean everything, and a play that has served a specific purpose for over 60 years, can, with the tweaking of one character’s attitude, end up arriving in a place that it has rarely been asked to go.

In Our Town, the character of the stage manager sets the tone of the whole production, serving as the narrator, setting up scenes on the bare, setless stage and introducing all the pantomiming characters. The stage manager is more than that, however; godlike, he also runs the show, frequently stopping the action to offer a few pithy insights to the audience, sometimes stepping in to play the town druggist or the minister or a neighbor on the street.

Occasionally, he dismisses characters in midscene when he feels they’ve made their point (“Thank you, ladies. We’re going to skip ahead now!”). At other times, he goes so far as to command the townspeople to perform a particular flashback, which they do without question, though sometimes he ends up negotiating with them, as when one gutsy character, late in the third act, approaches him with a few demands of her own.

Our Town can be a dark play. The stage manager steers the simple-dreaming citizens of Grover’s Corners, N.H., through a couple of decades of life in the early part of the 20th century, fully aware–as are we–that many of these people are stampeding with bright eyes toward mediocre lives that will fall far short of their expectations. Many will die unhappy, and some will die too young. But there is also light and beauty in Wilder’s Town, in his clear observation that life is miraculous and meaningful only when those who live it are as fully alive and aware as they can be.

Whether a particular production tilts toward the dark or the light is largely determined by how the actor cast as the stage manager chooses, or is directed, to play his part. Often he is played as being sardonic and vaguely cruel (as with Spalding Gray’s famous 1989 performance), or else he’s portrayed with a kind of faded compassion mingled with suppressed anger at the human race.

In this production, directed by Mollie Boice and featuring Fresno actor Blake Ellis, the stage manager is something else entirely: kind, optimistic and unswervingly affectionate. He clearly loves the people of Grover’s Corners and works from an assumption that everything that happens there is important and worthy and good, from the minutia of Howie the milkman’s daily rounds, to the flirtation between young Emily Webb (a pitch-perfect Blossom Benedict) and future farmer George Gibbs (Beau Hirshfield), and even to the awkward wedding-day advice Emily’s father (Matthew Weeden) offers his daughter’s groom.

This goodwill extends even to the fact that the town organist is a depressed alcoholic, that tragic Mrs. Soames (Laurie Hymes) is a lonely gossip and even the revelation that a smart young boy has died of a burst appendix.

In this stage manager’s eyes, it’s all good, and the resulting effect is phenomenal. Ellis’ kind, confident, good-natured stage manager somehow transforms Our Town from a show about the persistent shadows of human existence into a play about brightness and beauty, a celebration of the potential that lies unnoticed in even the tiniest pieces of everyday life.

Poor Mrs. Soames, in the final moments of the play, makes the remark, “My, wasn’t life awful?” and in many productions of Our Town, the audience nods in emotionally spent agreement. In SRT’s unforgettable production, the audience is invited to respond much differently. Life was awful for her, the stage manager has helped us learn, only because she wasn’t paying close enough attention.