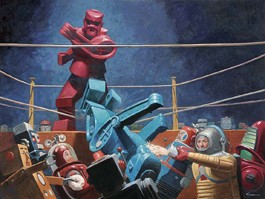 The Cyclons were created by man. They rebelled. They evolved. Isn’t that always the way with robots? We built a helpmate to avoid the ethical problem of slavery, and then the damn things get smart and throw off their electronic shackles. The Cylons—the female models, anyway—even turned out to be stronger, smarter and definitely better-looking than their human overseers on Battlestar Galactica. The ultimate existential crisis for mankind is that robots will out-evolve us.

On the other hand, in Woody Allen’s future satire Sleeper, the robots work as herky-jerky butlers in tuxes, easily imitated by the hapless Allen with some whiteface, a tin hat and a pour spout stuck in his mouth. In popular culture, we lurch between a desire for a domesticated robot to cook, clean and be companionable (servants for all, without class warfare; pets without poop) and angst about laser-beam-toting “toasters” reducing us to the status of inferiors.

Our love-fear affair with robots—and more particularly with the idea of robots—is explored in an entertaining new show opening Jan. 23 at the Sonoma County Museum called “Robots: Evolution of a Cultural Icon.” The artists represented comment on, appropriate from, exult in and refigure robot images and tropes as a way of coping with that horrifying, exhilarating moment when Dr. Frankenstein turned on the juice and started screaming, “It’s alive! It’s alive! It’s alive!”

Those words, as belted out by Colin Clive in James Whale’s classic film, can be heard in Amy Hicks’ DVD projection ReAdaptations: The Book Series. Hicks, a lecturer at Stanford, takes canonical creation texts—Frankenstein, The Stepford Wives, Asimov’s I, Robot—and covers their pages with pasted-on stills from the film adaptations. With stop-motion animation in the old-fashioned “flip-book” style, she brings the stories to an uneasy half-life somewhere between the authors’ original concept and the filmmakers’ creative distortions. As always, the stories we tell take on lives of their own, not unlike robots.

Gould’s looming found-part beings are both works of arts and, after a fashion, actual robots. With a motion sensor, General Debris rotates his shoulders menacingly when visitors cross his field of vision.

Thomas Zummer’s subtly shaded graphite drawings are aesthetic renditions of historical robot experiments. Some of the optimistic projects from the ’50s feature compliant household ‘bots who iron, dust and vacuum—indeed, the main dream Zummer captures is the wish that someone, something else, would take up the burden of housework. Some of these robots even have teeth and take cigarette breaks.

Adults may stay awake worrying about robots, but kids go to sleep dreaming of them. Several artists are smitten by the toy robot, all brightly colored tin and injection-molded plastic. Photographer David Pace poses toy bots in rigorous grids, straight on, as if positing a taxonomy.

Michael Mew, an Oakland artist who is a real find, layers pasted pictures of toy robots with various collage materials and applies a transparent resin coating to pull the elements together. In his Robots Gone Bad series, oversize toys spit flames at their opponents, which include a caped superhero, a jet plane and a giant wing-tip show floating in space. In Pulling the Plug, another robot holds a frayed electrical cord, surrounded by overlapping images of an astrolabe, a globe, Chinese characters and torn pages from a dictionary. Is it pulling the plug on itself or the world?

The toy ‘bots also go at it hammer, tongs and pinchers in Eric Joyner’s oil-on-wood-panel paintings. In What We Ought Not, We Do, a fierce red toy robot delivers a knockout punch to a blue robot, sending it sprawling over the ropes of a boxing ring into a crowd of agitated robot spectators. The picture wittily references George Bellows’ painting Dempsey and Firpo. One can only hope it isn’t a veiled allegory about the red state-blue state divide in electoral politics.

North Bay artists Monty Monty and Patrick Amiot are also included, but the last word belongs to Gail Wight. In a small, animated diorama called Star Struck, a toy robot sits in a frayed easy chair. Clutching a tissue, the robot rocks back and forth as if seized with sobs. He is watching a tiny TV set that is broadcasting Fritz Lang’s seminal sci-fi film Metropolis and weeping over the fate of the movie’s shimmering gold robot, Maria. Of course, as far as he is concerned, Maria is the heroine, not the villain of the piece. After all, somebody has to keep those human workers in the Underground City in their place.