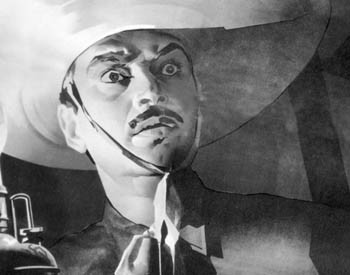 Blast From the Past: Classic footage gets a new home in Healdsburg filmmaker Oscar Guajardo’s ‘The Golden Age of Mexican Cinema.’

The class was titled “Cinema of the World,” and the course description promised an in-depth look at Latin American films. All this made student filmmaker Oscar Guajardo assume that the cinematic “world” he’d be exploring would include at least a few films from his birth home of Mexico.

So when the class’ segment on Latino cinema ultimately rolled around, Guajardo was surprised to find that Mexico and its movies were not so much as mentioned.

“I asked the teacher,” Guajardo recalls, in between sips of clam chowder at Bistro Ralph in Healdsburg, where he works in the kitchen when not making movies. “I said, ‘Where are the films from Mexico? What about Mexican cinema?’ And she said, ‘Well, I don’t really know anything about it.’ ”

“In every film class I took, I’d look for information about Mexican cinema,” he goes on, “but there was never anything. The film books I had would talk about Mexican cinema for maybe a couple of pages. But I knew that Mexican cinema had been a big part of early Hollywood, that the studios used to give money to Mexico to encourage people to make movies. Mexican film is an important part of the whole story.”

That story–as any enlightened cineaste will tell you–cannot be told without describing the contributions and innovations of numerous countries. Every contemporary film student knows that in the evolution of modern film, artistic movements like the German New Objectivity and the French New Wave have played as influential a role as the experiments of Russia’s Sergei Eisenstein and the addictive visceral intensity of the 1970s Hong Kong action films. The story of film is a story about the whole world.

Whether people know it or not.

“Mexican cinema,” Guajardo says, “is a neglected chapter in the history of film.”

Cinema Salsa: The Sonoma County portion of the Latino Film Festival offers a slew of films at Sonoma State University.

It was this realization that inspired Guajardo, 32, to make his first film, a feature-length documentary titled The Golden Age of Mexican Cinema. The result is an eye-opening blend of archival film footage and interviews with noted film historians, a number of them professors at Sonoma State University, where Guajardo earned his degree in communications studies last May.

Covering a period between 1936 and 1956, the film explores a time when Mexico was making thousands of films a year, exceeded in output only by the film factories of Hollywood.

These films ranged from the sweet-natured ranchera films–basically singing-cowboy flicks–to a Mexican brand of melodrama, such as the lushly photographed Maria Candelaria, which won the Grand Prize at Cannes in 1948.

Guajardo–who not only wrote directed, photographed, and edited the movie, but also served as narrator–allows the film to show the positive contributions of Mexican film as well as the negative. Many of the country’s Golden Age films, he admits, were patently sexist, relocating women to the limited roles of servant, mother, or “fallen woman.”

The film, a year in the making, has already been making waves. In September a little-advertised San Francisco advance screening of Golden Age drew a full house, largely peopled, says Guajardo, with enthusiastic teachers and film historians who greeted the film with riotous appreciation.

Now Guajardo and Golden Age are about to get another boost. The film has been chosen to premiere at the Sonoma County section of the Latino Film Festival–an annual multipart celebration of Latino cinema that screens films in San Jose, San Francisco, and Marin and Sonoma counties (see sidebar, “Cinema Salsa,” on this page).

Oscar Guajardo grew up in the small town of Urupuan, in the state of Michoacán, about three hours from Mexico City. As a young boy, he developed an appetite for the movies–“Kung fu movies, Italian movies, really bad Japanese movies, and, of course, old Mexican movies,” he recites–watching them on television when he couldn’t get to the town’s movie theater. In describing his childhood fondness for movies, Guajardo compares himself to the young boy in Giuseppe Tornatore’s Cinema Paradiso.

“That was me,” Guajardo says. “Every Sunday I used to go to the movies, because from 9 to 1 in the morning they showed three films, badly cut to fit the time. In Cinema Paradiso, it showed people yelling and eating in the theater. That was my first movie experience.”

And now Guajardo is making his own. He’s already at work on a follow-up feature, a documentary about the history of mariachi music.

“I like making documentaries because you don’t have to put up with actors,” he jokes.

That said, he’s toying with the notion of a nondocumentary film based on the folktales he learned from his mother and grandfather.

Until then, he’s enjoying his Golden Age experience, hoping it may be a step toward a renaissance of appreciation for the classic Mexican films of his youth.

“More than anything,” he says with a smile, “I just want to show people how beautiful these movies are.”