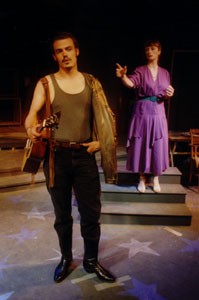 Let’s talk Greek myths. Remember Sisyphus? In a nasty fit of pique, the gods sentenced the poor bastard to Hades, where he was condemned to roll a gigantic boulder up a hill for eternity. He’d grunt, he’d sweat, he’d pour everything he had into the task. And when Sisyphus reached the top, the rock would roll back to the bottom again. His hell was that he’d been given a job that would always overwhelm him.

Now let’s talk community theater. Orpheus Descending, now onstage at Pegasus Theater under the direction of Michael Tabib, is Tennessee Williams’ updated retelling of another Greek myth about Hades. This one concerns a musician who braves the underworld to rescue his beloved from the clutches of death.

It’s no small matter to stage Tennessee Williams. His plays are monuments of pop culture, full of larger-than-life characters and the kind of dialogue that can sound a tad ridiculous coming out of the wrong mouth.

“That’s death knocking for me up there,” explains Lady Torrance. “Knock. Knock. Knock.” Lady (played by Jacquelynn Kathleen) is talking about Jabe, her evil, old husband, who has trapped her in a loveless marriage in a small town full of sharp-tongued gossips and ignorant yahoos.

The daughter of an immigrant bootlegger killed by the Klan, Lady runs her husband’s mercantile store while secretly hoping her wretched spouse will kick the bucket. He’s pretty sick–indeed, he looks positively cadaverous thanks to some nice work by Pegasus makeup artist Autumn Holbrook. But the cantankerous bastard is still lively enough to beat the floor with his cane when he wants his wife to play step-and-fetch-it or slap-and-tickle. Thus the knocking.

Into this thick slice of Southern-fried hell steps a handsome guitar player. Val Xavier (Will Schick) seems like a typical Tennessee Williams sex fantasy, a swaggering troublemaker with a snakeskin jacket and a shady past. But it turns out Val is tired of the wild side and wants to settle down. “I lived in corruption,” he explains. “But I’m not corrupted.”

Despite Val’s dubious employment record, Lady lends him a suit and puts him to work behind the counter in the mercantile store. She also strongly cautions him against hanky-panky. Unfortunately, both soon forget that warning.

Will this end in sorrow? The job of drawing that obvious conclusion falls to the town slut, a wounded woman with a tragic past. “You’re in danger here, Snakeskin,” Carol Cutrere (Maureen Renfo) warns Val. “You’ve taken off that jacket that says ‘I’m wild’ and put on the blue suit of a convict.”

Now let’s talk Sisyphus again. It seems like a tale of black despair. But liberal arts majors may recall that existentialist philosopher Albert Camus invited us to imagine Sisyphus happy. The joy, the meaning, the honor, Camus implied, lay not in achieving success but in making the effort.

Like Sisyphus, Pegasus Theater’s production of Orpheus Descending does not succeed. The acting ranges from competent to marginal to cringe-inducing. As Lady, veteran actress Jacquelynn Kathleen displays an especially surprising degree of difficulty with her lines.

Far worse are some directorial missteps. These range from the irritating use of intrusive canned music to the biggest mistake of all: producing Orpheus Descending at its full length. At more than three hours (including two intermissions), this play is too much for a small theater company full of relatively inexperienced actors. And it’s far too much for the audience. A few judicious cuts could have made a big difference.

Are theatergoers likely to enjoy this play? No. But should they respect Tabib and his actors who, like Sisyphus, make the attempt? Definitely.