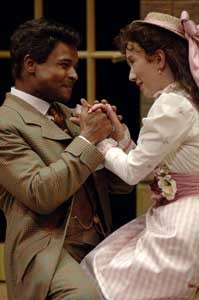 So Very Important: Kevin Kenerly and Julie Oda in ‘Earnest.’

Notes from Ashland in the crisp nonsummer

‘Oh, my God! Is it really that time of year already?”

So exclaims one dreadlocked, poncho-draped youth (since dubbed Abbott) to another (Costello) on a cold, crisp street in Ashland, Ore., as the pair are passed by a group in formal attire making their way to the beautiful Angus Bowmer Theatre, its lights blazing away in the crisp winter gloom. With the night’s performance of Shakespeare’s Winter’s Tale, the annual nine-month-long Oregon Shakespeare Festival is now officially underway.

While many migrating theatergoers think of the famous Oregon Shakespeare Festival (OSF) as a festive summertime experience with grand, open-air performances, a smaller number of hard-core theatrical adventurers have long recognized that the OSF has many faces throughout the year, the first of which appears the last weekend of February. But the North Bay is already largely aware of this, with some 3,000 tickets snapped up by Marin and Sonoma residents before April has even dawned.

By the time the full season ends in October, a total of 11 plays will have been staged. The season began with the aforementioned Winter’s Tale, a stripped-down, elegant and bear-free staging that will appeal to purists while disappointing those who like a bit more flash and dazzle in their Shakespeare. This opener alternates in repertory with a very funny, very well-done rendition of Oscar Wilde’s ever popular Importance of Being Earnest, which is a breath of fresh, professional air after seeing so many amateur productions of the same play.

Bridget Carpenter’s mysterious metaphorical comedy-drama Up–about that guy who flew his lawn chair with balloons– is highly recommended, as is a vivid new production, with a thoroughly reworked script, of The Diary of Anne Frank. Forget the old, dreary drawn-out version; this Diary is sharp, thrilling, funny, entertaining and emotionally complex.

After nine years of consecutive summertime excursions to the Oregon Shakespeare Festival in Ashland, I kind of hoped that this time–my first trip up for the official opening–there’d be snow in beautiful Lithia Park, like in the pamphlets in all the hotels. Alas, though the downtown ice-skating rink is still up and running for now, the snow is missing. And, hey, so is the head on the statue of Abraham Lincoln, the one that stands near the Shakespeare Stairs leading up from the park to Theater Square.

“The head was stolen by teenagers, we think,” explains young Alexander Barnes, a former Petaluman who now lives with his family in Ashland, where this year he is playing the part of the sweet, doomed Prince Mamillius in The Winter’s Tale. For the record, he’s very good, and when he skipped off stage after the curtain call, he stole the moment, charmingly.

While the plays were clearly the thing on opening weekend, the big question among the packs of visiting theater critics concerned the previously announced retirement of OSF’s longtime artistic director Libby Appel. Throughout her tenure here, she’s overseen a creative and box-office peak, and (following the steep audience drop-offs after 9-11) has helped the company bounce back, artistically and financially. Next season, 2007, will be her last. Has Appel’s successor been selected?

The answer, ceremoniously announced by executive director Paul Nicholson at a Sunday morning press conference is, and I quote, “Um, no.” Confessing that the search is still underway, Appel assures us that progress is being made and that a new artistic director will be announced before the end of the season.

“Actually,” Appel says, straight-faced and almost convincing. “I’m never leaving.” She does hope to continue directing. “This is the best town in the world for people who love this kind of theater. That’s why people come to Ashland from all over the country.”

Maybe someone should explain that to Abbott and Costello.

Tickets and information on the full season of the Oregon Shakespeare Festival can be found at www.orshakes.org. For full reviews of the opening weekend plays, check www.bohemian.com.