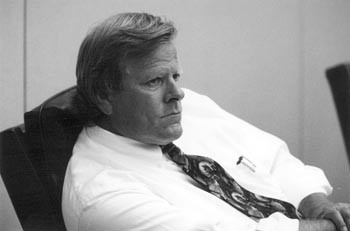 AN EXCLUSIVE and swanky soirée dreamed up by the beleaguered Sonoma County Open Space District in recognition of its own members, which would have had taxpayers footing the $10,000 bill for upscale catering, fine wines, and entertainment, became the target of county officials’ ire this week.

Sonoma County supervisors were furious when they learned of the invitation-only party, which was to be held on Sept. 13 at Richard’s Grove and Saralee’s Vineyard on Slusser Road, northwest of Santa Rosa.

“I was aware that the Open Space District was doing an outreach program [which includes public hikes on protected lands and an art show], but the first I heard of a private reception using taxpayer money was on Thursday,” says Supervisor Mike Cale.

A showdown occurred during Tuesday’s Board of Supervisors meeting when an embarrassed Open Space District Chief Dave Hansen apologized to the supes for not informing them of the arrangements.

Hansen said that, in light of recent “negative publicity” about the party, he wanted to postpone the reception until spring and solicit major sponsors and donors for a new event that would be open to the public.

“Seven unsolicited donors have already offered $3,000,” he told the supervisors.

“Publicity should have nothing to do with it,” shot back Supervisor Tim Smith. “Anytime public funds are used, the public should be included. I don’t want that message to be lost. You need to talk to us first.

“Precious public resources need to be spent for the public.”

A visibly angry Cale agreed. “It’s not about media attention; it’s about proper planning,” fumed the supervisor. “Failing to communicate with this body is not an oversight–it’s suicidal. Don’t leave me out of the loop again!”

Preparations had been made to celebrate the work of the Open Space District for some weeks, and 400 invitations had already been mailed out. Almost a third of those who were invited are employees of local or state government agencies.

The tony gala was slated to feature food, wine, and beer catered by Mistral Restaurant of Santa Rosa, plus live entertainment.

County voters created the Open Space District, which is funded by a quarter-cent sales tax, in 1990. So far, the district has protected almost 27,000 acres of land, mainly through the purchase of development rights. That selection process has come under fire in the past. A recent performance audit criticized Hansen’s management of the district.

Hansen says he proposed the reception as part of a month-long effort to enhance the Open Space District’s public image. But supervisors said that holding an invitation-only party at the expense of the public was not the way to go.

Supervisor Paul Kelley told Hansen that although it’s a good thing to give volunteers recognition and show the public the value of the sales tax initiative, he had “serious concerns” about throwing an exclusive party using taxpayer dollars.

Kelley then asked Hansen the date for the party. When Hansen responded that there was no date set as yet, Kelley replied with more than a tinge of sarcasm:

“I expect you’ll let us know. … I’m sure you’ve learned and that we’d see those notifications in the future.”