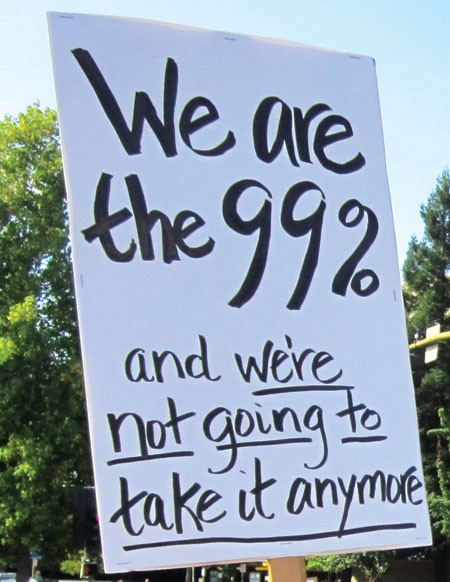 It’s hard to believe an entire year has passed since Occupy Wall Street swept the nation. In the North Bay, approximately 4,000 people took to the streets of Santa Rosa last October, one of the largest marches during a national day of action. Throughout the past 12 months, the movement has morphed to accommodate the needs of the millions of Americans who are out of work, facing home foreclosure and steadily rising healthcare costs, or weighed down by exorbitant student debt.

The local Occupy movement has stayed busy, holding vigils in Petaluma for people who’ve lost their homes to foreclosure, and sponsoring teach-ins and free schools on everything from poverty and homelessness, to corporate control of the democratic process. “Despite the perception that Occupy has somehow withered away, we have in fact evolved out of a spontaneous outburst of popular anger into a serious political organization which confronts the injustices that face working people and the 99%,” says OSR organizer Carl Patrick. “We are maturing, growing and finding new organizational forms that can last for the long-term.”

On Oct. 14, Occupy Santa Rosa holds a parade through downtown Santa Rosa to celebrate the one-year anniversary of a global movement. The organizers encourage people to bring pots and pans for a “Casserole March,” inspired by the student strikes in Quebec, and as a way to participate in a “Global noise protest.” The OSR gathering kicks off on Saturday, Oct. 14, at Santa Rosa City Hall. 100 Santa Rosa Ave., Santa Rosa. 2pm. 707.595.0814.