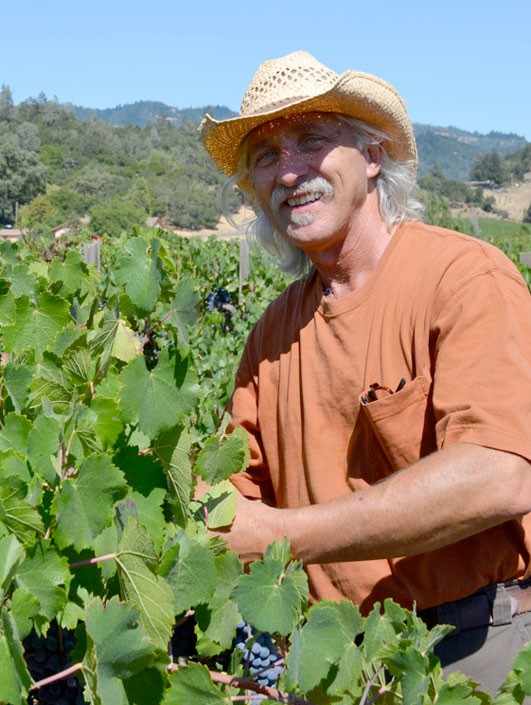 Many a self-styled Napa Valley rancher, rusticating after a corporate career, might like to have Vince Tofanelli’s look. Perched on the tailgate of a vintage Toyota Land Cruiser at the edge of a vineyard, wearing a straw hat over wavy gray hair, Tofanelli could be a hippie farmer or veteran blues man, but mostly looks the part of the third-generation grape grower that he is.

Not many would envy the look of his vineyard. Instead of Cabernet Sauvignon neatly confined by miles of steel and wire, dry-farmed, head-trained vines sprawl every which way. Established by Vince’s grandparents, Sebastian and Irene DiGiulio, in 1929, the ranch is planted in Zinfandel, Petite Sirah and Charbono, with idiosyncratic patches of Grenache and Burger, and the odd Cinsault in between. When the new regime rolled up old vineyards like this, Tofanelli’s land became an island, a living museum. For him, doing something radically different meant staying exactly where he was, becoming its curator. “This was the time of Earth Day, of back to the land,” Tofanelli explains, reflecting on his grandparents, who had always lived on the land, with a milk cow and chickens in the yard. “They didn’t have a word for organic, but they were living it.”

No Napa origin story being complete without an André Tchelistcheff cameo, it was the maestro who advised Tofanelli to plant Charbono, of all things, when it was about as fashionable as disco. Tofanelli’s 2012 Charbono ($40) has exotic aromas of spice, ripe arbor grapes and fig, and a characteristic standoff between acidity and tannin that makes Charbono an interesting guest at the dinner table.

Brimming with olallieberry wine and boysenberry fruit flavor, with fresh tobacco notes, the 2011 Zinfandel ($35) is plush and toasty, without heat. The photograph on the label shows Irene, gamely posing on the 1915 Harley Davidson that the couple rode to San Francisco to elope. Tofanelli shares a tasting room in Calistoga with Barlow, Hindsight, Kenefick Ranch and Zacherle, where you may taste at the bar, or buy the 2013 Sémillon ($28) by the glass and hang out in the courtyard out back. With a savor of ground Herbes de Provence, the 2012 Grenache ($40) smacks of licorice and strawberry; it’s lively, bright and earthy.

It’s nice to find that for his efforts, Tofanelli is not only preserving historical curiosities, but is also offering delicious wines that are anything but rustic.