.Off the Eaten Path

Eyeballs: They're what's for dinner 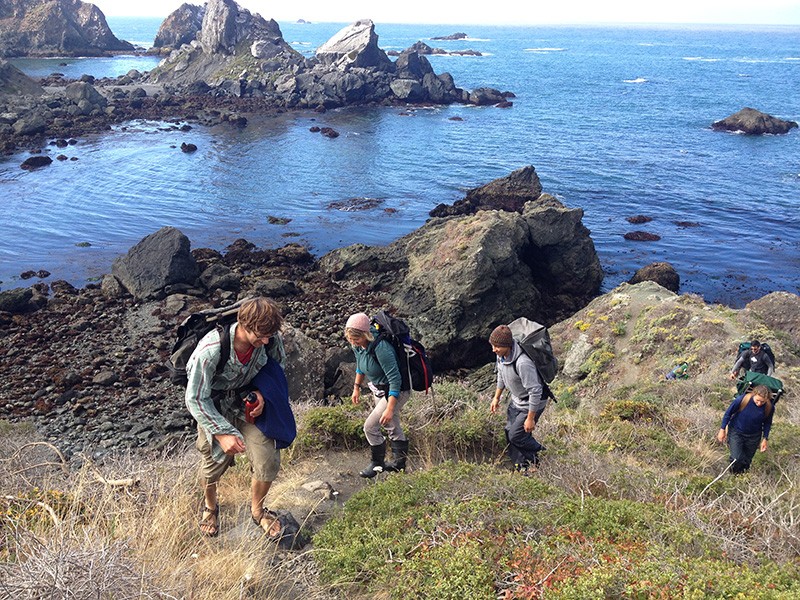 When it comes to putting together our annual food and wine issue, we often look to the bounty of local farms, ranches and vineyards for inspiration. And they are inspiring. But this time around we decided to look off the beaten path for foods and food experiences that range from the esoteric to the straight-up bizarre. So instead of farm-to-table think far out–to-table.—Stett Holbrook

THE EYE OF THE FISH

I had to eat that fish eyeball. I just had to.

Let me explain. I came up with a recipe years ago that’s proven to be a real hit, though it’s a challenging recipe to do on California’s beaches.

“Fish on a Rock” is the recipe, and it’s simple: Catch a fish and gut it. Do not remove the skin, or the head. Start a fire on the beach and place a big, flat rock on top of the fire. Wait for the rock to heat up, put the fish on top of the rock, and cook the fish in the salty breeze as you do a sun dance or whatever.

Take a moment to enjoy your surroundings, and squeeze a lemon if one’s handy. Eat the fish as you commune with your inner Survivorman. Eat the whole damn fish.

One time, I was out on the beach cooking up a big porgy on a rock. Porgies are a kind of sea perch, wicked popular in the African-American community on the East Coast (“Fry it hard!”). These little scrappers are hella fun to catch—they’re in the same fish family as seabreams.

Problem is, California beaches just don’t have the variety of rocks you find in Montauk, N.Y., the mother country out on Long Island’s East End.

That’s a land carved out of departing glaciers, and as such, there’s wild variety of stones of various shapes and sizes that were left behind. So says Walt Whitman: “Even to my unscientific eyes there were innumerable wonders and beauties all along the shore, and edges of the cliffs. There were earths of all colors, and stones of every conceivable shape, hue, and destiny . . .”

Alas, Fish on a Rock may not work here—we’ve got crumbly sandstone, volcanic rocks, not much else on our beaches, at least insofar as I’ve experienced them. Fish on a Surfboard won’t work, and anyway, for the most part, you’re not supposed to be lighting a fire on the beach. I suggest you tote an iron skillet to the beach to compensate for the lack of stones.

Picture this. It was a fine late-summer afternoon, the porgy was roasting on a rock, and the porgy eyeballs started to bulge as the white fish-flesh sizzled.

The eyeballs started to speak to me, like that freaky mounted fish from The Sopranos.

They demanded that I eat them! It was a craving such as one might have for a pint of Ben & Jerry’s, but this wasn’t no Phish Food.

I fashioned some chopsticks from beach reeds and kept staring at that eyeball, flipped the fish over and stared at the other.

It was eyeballing me!

I ate the fish fillets, carved out the cheeks—and then moved on to the eyeballs.

They weren’t bad; in fact they were quite tasty: salty, squishy, heavy with a fish-fat fishiness—and the trick, I’ve learned, is to let the eyeball linger on the tongue before it slithers down yon gullet.

The idea is that you want to extract the micro-burst of fish-fat flavor. If that triggers your inner ewww, I suggest you think happy thoughts about oysters and other enjoyably slippery things. Activate your inner Anthony Bourdain, close your eyes, and go for it.—Tom Gogola

CALL OF THE WILD

In Barbara Kingsolver’s Animal, Vegetable, Miracle, she and her family commit to eating only what they can grow and source locally. Given their homestead in southern Appalachia, that means going without many warmer weather crops. To make it a bit easier, they each get to choose one food from afar they can’t do without—coffee, bananas, pineapple . . .

If it were me, I’d have a hard time choosing my one imported food. I love avocadoes. And chocolate. And coffee. But if push came to shove, and peak oil peaked out sooner than predicted and cargo ships and trucks could no longer make it here, I think I’d be OK. Kevin Swift clued me into a local source for those foods, or at least an approximation of them: the California bay laurel tree.

Swift lives in Occidental and is a wild-food forager with a fondness for the aromatic and ubiquitous bay laurel. The leaves are good for seasoning pasta sauce, and the seeds are an underappreciated source of food, one used by local Pomo and Miwok indians for millennia.

It takes a bit of work and proper timing, but it’s possible to make “chocolate” and “coffee” from the pods. The trees are related to the avocado, so it’s even possible to make an analogue of guacamole from the seed husks. And like chocolate and coffee, food from bay trees packs a caffeine-like buzz.

The time to gather the seeds is about four to six weeks from now. You want them when they start to fall to the ground. Bay seeds are about as big as marbles and quickly turn from green, to yellow, to purple and to black mush. You want them in the purple stage.

“They are very ephemeral,” says Swift.

Once you find a suitable source, remove the flesh to expose the shell. Raw, the nuts are exceedingly astringent. But roasted for 20 to 30 minutes at 250 or 300 degrees and then shelled, they lose their bite and go from nutty to chocolatey to coffee-y.

Grind them up with a little sugar and milk, and you’ve got homegrown, homemade chocolate. But be careful how much you eat.

“It definitely has a buzz in it,” Swift says.

Coffee is trickier because the nuts are so fatty and oily, but devotées say you can put the ground nuts in a French press and brew as you would a good Ethiopian yirgacheffe.

The bay nut can be pickled too. Last month, Swift pickled a batch of nuts in their immature green stage. They turn out like cocktail onions, he says—cocktail onions with a coffee-like buzz.

Swift says he prefers taking to the woods than going to the grocery store for food.

“I’d rather look for what’s around me,” he says. “There’s so much deliciousness in our backyards.
We just don’t look for it.”
—Stett Holbrook

Heidi Herrmann co-owns Healdsburg’s 1.5-acre Strong Arm Farm. She used to make the rounds of local farmers markets, but found selling carrots and lettuce yielded too little money for the effort. Now she focuses on growing more lucrative crops like tuberose lilies for wholesale markets. She’s carved out a niche for another crop that has proven to be profitable as well. She doesn’t even have to grow this one, because it’s seaweed.

Herrmann, who teaches sustainable agriculture at Santa Rosa Junior College, is a commercial seaweed harvester on the side. About 10 times a year, when the tide is particularly low, she dons rain boots and an external frame backpack and picks her way across the rocky reefs north of Jenner in search of nori, kombu, wakame and a few other species of seaweed. After hauling the sea vegetables up from the shore, she rinses and dries the seaweed and bags it up.

The kombu adds a rich, umami flavor to soups and stews. Wakame is great toasted and eaten by itself or added to salads and soups. Nori, the seaweed used to wrap sushi, is best toasted and crumbled over salads and vegetables.

Given the demand, Herrmann could harvest more, but she wants to keep her operation small.

Keeping the business small keeps it fun, she says. She doesn’t surf or fish, so gathering seaweed gives her a connection to the ocean.

“Many people have done this before,” she says. “It feels part of a continuum.”

Herrmann enjoys gathering an ancient food that requires a degree of risk and more than a little hard work. She gathers about 250 pounds of wet seaweed on each outing.

“You’ve to lug it out. There are dangers. It’s slippery. There are urchins. I like that it’s not easy.”

And unlike farming, there’s no weeding or planting required.

“I let the ocean do the work.”
—Stett Holbrook

Herrmann is leading a sunrise seaweed-gathering outing with Forage SF Aug. 1 that includes a presentation and meal featuring local seaweed at the Jenner Inn the night before. Go to foragesf.com/seaweed-foraging for more information.

The goji berry tree became known across the Pacific Rim thousands of years ago for its nutritional value and sweet taste. Asian immigrants first brought the hearty shrub, Lycium barbarum, to California 200 years ago. These days, the goji berry is touted as a superfood, and now Goji Farm USA is growing the plants right here in Sonoma County.

“There’s no aspect of this plant that isn’t highly nutritious,” says founder and CEO Tibor Fischl. The Santa Rosa resident and outdoor enthusiast, who, among his other credits, co-invented the world’s first full-suspension mountain bike 20 years ago, has moved into food production with the same focused attitude.

Goji Farm USA produces a beverage called Goji Phyto-Brew from berries and seeds that are roasted, ground and brewed as an organic tea. “With the roasting and milling, we got so much more of a concentrated impact of the gojis than anything else we could do,” says Fischl.

For the past three years, Fischl has sourced his berries from organic farmers around the country. More recently, Fischl teamed up with Jay Jensen at NovaVine, a family-run propagation farm in the hills just east of Santa Rosa. The farm specializes in growing grape-vine stock, for wineries, and now goji berries.

The current goji crop of 550 “mother plants” is predicted to top a quarter of a million within a few years.

Available in the North Bay at retailers like Whole Foods and Pacific Market for about $4, the slightly tart and earthy tea is refreshing and has a mildly uplifting effect.

Unlike caffeinated or sugary beverages, the anti-oxidant and vitamin-rich drink offers a natural alternative to powering through the day. The tea is reportedly high in “oxygen radical absorbance capacity” and is touted as a way to combat free radicals, which cause aging and illness. The tea is also very high in folic acid and vitamin B6, two key nutrients,

“But the biggest test of the beverage is how you feel when you down one of these bottles,” says Fischl.

Goji Farm’s next harvest is set for this fall, and to celebrate, they are throwing a harvest party Oct. 9.
For more information, go to GojiFarmUSA.com.—Charlie Swanson