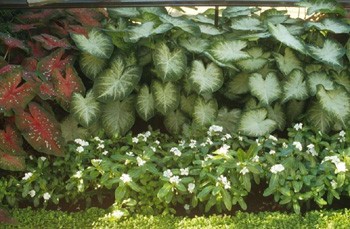 How Does Your Garden Grow?: Plants are the gift that keeps on giving, and local nurseries offer a bit of everything.

On a leaden fall day, some 18 young ones are loaded onto a truck to go east for the winter. Averaging about 20-feet-high, these delicate youths must leave hardier stock behind as they set off to a life of relative ease, vacationing in the temperate leafy climate of Vacaville until spring. The crane has hoisted, a tarpaulin cover is tucked tenderly around them with rope, and these youngsters head–perhaps woefully, perhaps actually not–out of the Neon Palms’ rural Santa Rosa parking lot.

Retailing palm trees of all sizes and varieties, Neon Palm (3525 Stony Point Road; open Monday-Saturday, 10am-5pm, and Sunday, noon-5pm; 707.585.8100) is just one of the many North Bay nurseries specializing in unique, rare, or just plain different plant stocks. While black thumbs proudly abound, each of us has at least one green thumb lurking somewhere on the holiday list–that person who can actually get an avocado tree to grow out of a pit–who deserves a gift.

With this in mind, we set forth to suss out some of the niche plant shops and grow-grounds around, where unusual living gifts can be bought and green thumbs heartily applied. While such established botanical businesses as Harmony Farm Supply, Bassignani Nursery, and the Sloat Garden Center certainly aren’t to be treated like dirt, we sought here to keep from the general to the particular.

Turning to watch his youthful truckload disappear out the drive, Neon Palms acting manager Mike Hewitt assures that a date palm can grow to be over 200 years old, and that the cost will reflect such hard-earned longevity. But a queen palm, the human-sized type with the pineapple-shaped base and a raft of crazy featherlike leaves springing from it, retails in the $45 to $220 range. And the Guadalupe fan, whose trunk resembles nothing so much as an elephant’s leg topped with swordlike fronds, can be placed under a decorated evergreen for roughly $85 to $250.

In the town of Tomales, almost no plant towers higher than a person at the Mostly Natives Nursery (27235 Hwy. 1, Tomales; open Wednesday-Saturday, 10am-4pm, and Sunday, 11am-4pm; 707.878.2009). Named for what it mostly stocks, Mostly Natives features plants found along the trail and on the hillsides stretching from the Pt. Reyes National Seashore north to the Mendocino Coast. Simply going to this nursery may be one of the best ways to settle all arguments provoked by those plants regularly spotted in life and seemingly never parsed in the guidebooks.

For the extra romantic gift giver, $30 (averaging $4 to $7 per plant) could ably produce an entire sketch of the flora featured on a favorite love-hike. Take Douglas iris, add sticky monkey, plant in new sprigs of coyote bush and blue-eyed grass, and most of the high portion of the Muddy Hollow Trail is suddenly encapsulated, a lack of bunnies notwithstanding.

A trip to Pond and Garden (6225 Stony Pt. Road, Cotati; call for winter hours, 707.792.9141) quickly reveals this nursery to be about much more than the fish. Learning of ecstatic reports by other visitors of the spiritual vibe at his place makes co-owner Scott Wilson laugh gently. And then he begins to point out–as do all niche nursery owners asked–exactly all of the plants that he won’t be selling.

“Oh, I’m keeping this hostage for a while,” Wilson smiles, pointing to a bonsai he trained as a teenager 32 years ago. “I’ll get rid of it some day.” Featuring unique steel sculpture (figures by Cricket Seagull are $500 to $700), Pond and Garden is one of the largest retail outlets in the Bay Area to specialize in water plants and “features,” but also has one-of-a-kind conifers, acrobatic pigeons, free mosquito fish, and a heady array of unusual bromeliads, most of which Wilson, again, won’t sell. “But I’ll sell the cuttings,” he says with a promising grin.

Merilee Maertz, co-owner of California Carnivores (2833 Old Gravenstein Hwy. S., Sebastopol; open Thursday-Sunday, 10am-4pm; 707.824.0433), doesn’t need to rely on cuttings now that tissue-culture technology has made reproducing carnivorous plants so much easier. Ducking into the nursery’s hot room, she pulls back the lid of a pitcher plant’s elongated death-pocket to reveal its two sharp fangs. Later, standing in her propagation area, a collection of perhaps 40 children’s plastic swimming pools filled entirely with water-needy flesh-eating plants, Maertz explains that the fanged pitcher was one of only eight kept in the United States just a few years ago. Now she can produce as many as she needs.

Some carnivorous plants can consume as many as 20 flies a day, though Maertz doesn’t keep them for their pesticidal abilities. Those such as the sun pitcher from Venezuela ($100) feature long trails of delicate orchidlike flowers that would be welcome in any formal room; such so-called killer plants are actually quite gorgeous.

California Carnivores doesn’t miss any jokes either, selling Little Shop of Horrors videotapes, “killer plants” puzzles ($8.99), and T-shirts ($18-$24.95) near its register. “I wonder who Audrey should eat next,” Maertz slyly asks, looking at the life-sized display of the man-eating plant from Horrors consuming a Halloween witch in the nursery’s main room. “Santa!” one of her employees happily chirps.

Considering that he owns a place called the Great Petaluma Desert (5010 Bodega Ave., Petaluma; open Friday-Sunday, 10am-4pm; 707.778.8278), it’s surprising to hear Jerry Wright proclaim, “I’m not into cactus. I keep saying that I’ve evolved.” With some 500 species of succulents and, yes, even some cacti available at his nursery, what Wright has evolved into is some serious international importation. Featuring succulents from South Africa, Madagascar, and beyond, Wright says that he has one of the largest collections of caudiforms in the world. He is met with a blank stare. “Plants with a caudex,” he says slowly. Blink. For those in the know, average walk-in customer sales range from $200 to $1,000, and business booms on the Internet.

Like a little Bolinas oasis high up in Occidental, Western Hills Nursery (16250 Coleman Valley Road; open by appointment only through February; 707.874.3731) has one small sign that can only be seen when traveling past in one direction. Owner Maggie Wych likes it that way. A former potato field plowed under some 30 years ago, a three-acre circuit of paths and ponds and bridges now entirely surrounds the retail area, a simple stroll revealing many plants surprising to the eye: hydrangeas with curly stems, maples with curly limbs, and something that appears to be a curly pine.

Wych likes the unusual, propagating from cuttings and seed. “No fruit, no veg,” she says in her distinct English accent. “Other people do that really well, and I just keep to what I do best.” Because of the near-magical setting of the nursery, she encourages people to buy gift certificates rather than plants as presents; it gives an excuse to come back.

Later, she perhaps speaks for all nursery owners when she says, “This is an absolute labor of love. I absolutely adore it. It’s really all that I’m doing all of the time.”

One of a Kind

That’s not all! Here are some other nurseries that help to slake the one-of-a-kind lust.

Bamboo Sourcery. Specializing in that fast-growing grasslike stuff, Bamboo Sourcery not only sells over 200 varieties of bamboo stock, but recently added furniture, fencing, and garden accessories crafted from it to their roster. 666 Wagnon Road, Sebastopol. Plants, $15-$80, regular stock; $15-$250, collectors’ stock. Open by appointment only. 707.823.5866.

Farwell and Sons Rhododendrons. Like roses, rhododendrons both suffer from and are blessed with unusual names. With varieties ranging from the Mrs. G. W. Leak to the saffron meadow to the President Roosevelt to the simple ZZ, Farwell and Sons has some 100 different types of exotic, newly hybridized, and traditional rhodies to choose among. 12983 Bodega Highway, Freestone. Plants, $24-$42.50 each. Open Thursday-Monday, 10am-5pm. 707.823.8415

Geraniaceae. This Kentfield nursery offers only that hardiest of plants, the geranium. But unlike the familiar, dull pinky-red flower, Geraniaceae specializes in unusual kinds of geranium in petal shapes new to nature. In order to keep their stock handy, not all varieties are available for sale, though they will propagate a plant on request. Plants, $4-$7. 122 Hillcrest Ave., Kentfield. Open by appointment only. 415.461.4168.

Petaluma Rose Company. A small, family-run operation that not only sells many different varieties of bare-root and established roses, but also offers practical area advice on getting yours to bloom and keep on blooming in North Bay climes. 581 Gossage Ave., Petaluma. Open Wednesday-Saturday, 9am-4:30pm; Sunday- Monday, by appointment only; closed Tuesdays. 707.769.8862.

Trees of Antiquity. Give the taste of 100 years ago through the certified organic heirloom stock preserved and propagated by Trees of Antiquity. Based in Healdsburg, this outfit doesn’t have a garden to wander per se, but online and catalogue purchasers of their old-fashioned fruits can ably pick their goodies up at the space shared by California Carnivores, where the Trees of Antiquity guys have arranged to drop stock off to customers. Plants, $7-$30. For details, call 805.467.9909. www.treesofantiquity.com.

Wildwood Farm. Specializing in Japanese and other Asian maples, the Wildwood Farm has over 300 varieties of these highly prized trees. The addition of a well-conceived sculpture garden makes for a fun shopping experience. Average price for a two-year-old tree is $35-$125. 10300 Sonoma Hwy., Kenwood. Open Wednesday- Sunday, 9:30am-4pm. 707.833.1161.