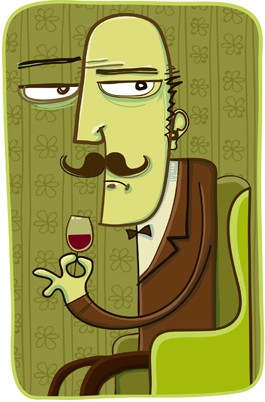 In America, we’re all aware that the mighty French know everything and more when it comes to the subject of making, selling and drinking wine. However, in the south of France, many winemakers, eager for new business prospects, are at last lightening up as they look humbly west.

Historically a producer of less than glamorous wines on a surplus scale, the Languedoc province has begun in the past five years to shift its focus toward boosting the quality of its wine and spreading the word to Americans, especially as national consumption of wine across France declines. The change of tack has been most pronounced among those who make wines classified as Vin de Pays d’Oc, or “country wine from the Languedoc.”

These vintners have largely abandoned the stodgy French traditions of winemaking and pursued marketing angles far less intimidating and more attractive for American consumers. Their tactics include instituting greater quality control, altering their winemaking techniques, like opting for simpler blends, and trying out fun labeling ideas. Some producers, for example, have adopted brand names like “French Rabbit,” “Fat Bastard,” “Red Bicyclette,” “Arrogant Frog” and other symbols evocative of a very stereotyped France. Americans are tickled. We’re taking the bait, and it tastes good.

Vin de Pays represents a denomination of French wines two steps down from the regal Appellation d’Origine Contrôlée (AOC) status and one step up from Vin de la Table, or “table wine,” which is often produced in backyards and enjoyed from household to household. Vin de Pays, like other grades of wine, is produced throughout France. No one chooses to make Vin de Pays. The government simply declares a plot of land as excellent, good, not quite as good and even less good. Vin de Pays is, theoretically, the not-quite-as-good wine, but at $9 to $15 a bottle, most casual consumers in the United States consider this a fine value.

Many of Languedoc’s Vin de Pays vintners have taken aim at American wine drinkers as a promising consumer base in the worldwide market, and most of the bottles are entirely free of the complicated flurries of extra vowels and silent consonants that clutter so many French wine bottles and leave English speakers scratching their heads in the supermarket aisle, wondering what the devil all that stuff is supposed to mean.

The front label of Thierry and Guy’s Fat Bastard Chardonnay, for example, bears just one French word—”Chardonnay”—for if there’s one thing that an American wine drinker wants, it’s a good old-fashioned varietal.

“[The varietal] is part of Americans’ reference and what they look for when they look at a wine label,” said Brigitte Barreiro, marketing representative for Domaines Paul Mas, which produces Arrogant Frog wines. “The varietal is a very important element of the label. Look at Sideways—it is all about Pinot Noir and the Merlot.'”

Even within France, marketing styles are evolving as wine consumers collectively grow less knowledgeable of wine regions and the finer attributes of quality. Whereas wine labels and supermarket aisles have traditionally been organized by the terroir, the area, the history and the estate, new and simpler tactics are coming into play.

“Our wine board for Vins de Pays d’Oc is beginning to advertise the wines according to their aromatics,” says Barreiro. “This is quite new in France.”

Arrogant Frog’s label also represents another brand-new yet increasingly popular approach among French producers in connecting with their consumers, says Barreiro, who pronounces the phrase flatly: “Auto-derision.” The bottle features an illustration of a dapper frog in a purple beret and sport coat, clutching a wine glass, leaning on a cane and sneering at the shopper. He’s a slimy-looking dude, and he’s irresistible. It’s a joke that Americans and Britons are likely to enjoy—important to consider when the French wine market seems to be waning.

“There is big concern about the decrease in consumption in France, and our [government] is making stricter and stricter laws, which encourage the lower consumption,” says Barreiro. “Wine is more and more presented as a drug, an addiction, a threat and not as enjoyment, sharing, culture and health.

“As we do not market our wines in France, we are not as worried as many producers can be,” she continues. “But many others are trying to market their wines abroad, and in many cases this requires a product adaptation to compensate for this loss.”

Meanwhile, the Languedoc became France’s newest AOC on May 3, 2007, and the region’s AOC vintners have gone straight to the consumer to help them find their legs and rise quickly into the serious economy of world-class wines. But first, the Languedoc vintners held an experimental tasting among themselves, sampling 150 bestselling red wines from around the world with the objective of classifying them and breaking the wines down into categories.

A consumer survey followed. One hundred wine drinkers in Chicago, 100 in London and 100 more in Paris sampled the four Languedoc prototypes. Overall results suggest they enjoyed the wines, while their more detailed comments and opinions will guide the Languedoc’s AOC vintners in developing blends and labels that appeal to these consumers. The survey marks a sharp turn in upscale and often pretentious French wine marketing methods; it was the first time ever that an AOC inquired with its targeted consumer base before styling its wines.

Two tiers below, among Vin de Pays d’Oc vintners, many wineries are making the shift toward the humorous, light-hearted approach to connecting with consumers in America. “Take a wine on the wild side,” jests the company motto of Wild Pig winery. Red Bicyclette’s says, “The French wine that speaks your language.” And Arrogant Frog’s declares, “Old World wines with New World attitude.”

“The ‘New World attitude,'” explains Arrogant Frog winemaker Jean-Claude Mas, “is an attitude which consists of listening to our customers and understanding their needs, and adapting our wines. This is not very common, even nowadays, in France, but things are changing, especially in the Languedoc.

Certainly, the times are changing as many south of Languedoc vintners in all denominations of quality alter their tactics of business. And in spite of the pompous amphibian, it appears that the French days of arrogance, so infamous, may be coming at last to an end.