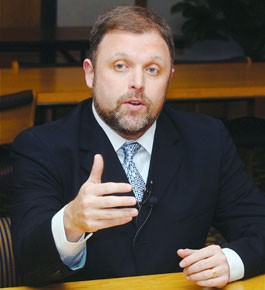 Tim Wise is the award-wining author of White Like Me: Relations on Race from a Privileged Son, an in-depth meditation on the ingrained sense of superiority in the Caucasian race. Rather than take an academic or political stance, Wise employs a series of anecdotes from his own life—his mother’s unprovoked racist rants, his grandmother’s house in a segregated neighborhood—to paint a picture of a smart, critical white guy coming to terms with and spreading the word about white privilege in America.

Now a lecturer and director for the Association for White Anti-Racist Education, Wise has taken up academics by appearing regularly at colleges. With his latest book Between Barack and a Hard Place: Racism and White Denial in the Age of Obama, Wise throws himself into the political arena. We are not in a “post-racial” society simply because we elected a half-black president, Wise argues. Rather, we are now experiencing “racism 2.0,” in which society rewards a select few successful minorities for “having ‘transcended’ their blackness in some way.”

America is still very much a racist place, as Wise shows in some harrowing statistics. Blacks and Latinos make up 25 percent of drug users in this country but make up 90 percent of those in prison for drug possession. Black women are nine times more likely to be stopped at airports for contraband than white women, although white women are twice as likely to have drugs in their possession. And so on. Wise writes that despite his in-depth speech on race in Philadelphia during the election, Obama has said little about these enduring discrepancies.

Anyone who grew up watching The Cosby Show and its subsequent backlash will hear familiar echoes in Wise’s pitch; namely, that a prominent black man who is articulate, smart and well-mannered may actually be bad for the fight against racism. That theory relies on whites being content about their own systemic privilege. Wise aims to electrocute that complacency when he speaks on Thursday, April 15, at the Cooperage at Sonoma State University. 1801 E. Cotati Ave., Rohnert Park. 7:30pm. Free. 707.664.2382.