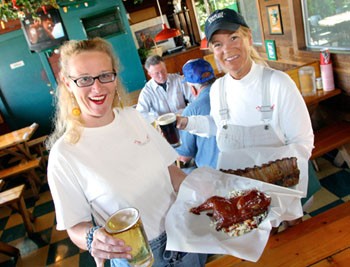 All she wanted was a pulled pork sandwich

Barbecue used to be equated with misery. This was at least the case when I was little and my family, piled in our station wagon, would head down the interstate from Ohio to our South Carolina vacation destination. En route, somewhere in the belly of North Carolina, Dad would inevitably strike out from our charted path to unknown back roads, searching for some long-lost barbecue shack where, in 1961, he had had baby back ribs he could taste to this day.

Naturally, these places no longer existed, or maybe never existed in the first place, and after hours of chasing down twisty, gravel dead ends, we’d wind up at an off-ramp tourist barbecue emporium, built to resemble a big red barn and marked with a sign shaped like a pig wearing a chef’s hat that could be seen five miles away. As an eight-year-old reared on ground beef casseroles and canned soup, the sticky, sultry, charred allure of barbecue eluded me, and I’d pout with resentment at my pork sandwich, wishing it were a nonthreatening McDonald’s hamburger.

I can now understand that, whining children be damned, the elusive and smoky quest for the ultimate barbecue experience is not a compulsion to be denied or taken lightly. When it comes to barbecue, normal people lose all sense of reason. Issues of sauce, of woods for smoking, of cuts of meat, of the pit itself, are cultural flash points, too deep in scope and too rife with emotion to get into here. For purposes of this article, though, these points must be clear:

Grilling hot dogs and burgers over a hibachi is not barbecue; it is grilling. Saying you “barbecued” a hamburger or a hot dog is bad food grammar. According to Vogue food critic Jeffrey Steingarten (who is elaborately opinionated about his food, as any barbecue aficionado should be), “Real barbecue is slow, enclosed cooking at gentle temperatures in moist hardwood smoke.”

As an ideal barbecue foil in texture and flavor, the importance of good coleslaw to the enjoyment of good barbecue cannot be overestated.

A pulled pork sandwich is the ultimate end the noble hog can hope to attain. Good pork barbecue is like candy for grownups.

The whole affair began at Porter Street Barbecue, in that big plaza in Cotati where Oliver’s Market is. The meat on their pork roast sandwich ($4.99 small; $5.49 large) was not shredded as I had hoped, but sliced paper-thin and wielding a respectable smoky flavor. The rubbery roll, like a grocery store baguette, added unnecessary chew and distracted from the meat. Porter Street’s barbecue sauce is a pretty one-dimensional glop, dark-brown-red with a molasses/ketchup thing going on. It could stand more tang and spice. I do commend Porter Street, however, for serving their barbecue sauce warm.

But I was pissed that an eight-ounce side of coleslaw, the cheapest side dish in the universe to produce, is a staggering $2.19. You should not have to pay $2.19 to maintain the rightful barbecue-coleslaw harmony. Porter Street does have cherry 7-Up and RC Cola, two hard-to-find soft drinks whose presence marked the highlight of my experience there.

Next, I turned to Rob’s Rib Shack in Sonoma, which, just off Arnold Drive, automatically has the one-up on Porter Street for its character. Screen doors and outdoor picnic tables facing a golf driving range create a shack-meets-leisurely-affluence atmosphere that’s the epitome of Sonoma.

The meat on a Rob’s pork sandwich is also not shredded (pshaw!) but sliced medium-thin and juicier than Porter Street’s. It’s served piled on a fancy bakery roll that’s somewhere between hard and soft and, at $5.99, comes with a pickle spear and a side of coleslaw. Rob’s barbecue sauce, reddish-orange and mild, is not particularly thick or smooth–an acceptable but unexciting sauce, not as cloyingly sweet as Porter Street’s. The coleslaw was runny, with a watery dressing that had some bite from what I suspect may be horseradish. Via friendly service (I loved to be called “honey”) and a setting infused with its own distinct yuppie roadhouse personality, Rob’s makes the cut, though it’s still not the Brigadoon of barbecue.

The joint I had been yearning to check out was Pack Jack on Highway 116 in Sebastopol, mainly because it looks like it would be a solid barbecue place. For a barbecue joint, looks are not everything, but they are a lot of it–and the homelier, the better. Off-kilter doorjambs, ratty screens, shingles askew, faded formica, window frames in need of paint, yellowed posters and menus tacked up on the walls–these are all very positive indications that you are in the right place. Just driving by Pack Jack, you think to yourself, “Now, that must be good barbecue.” I had the luck to rustle up a Mr. Bir du Jour, and off we went to unlock the mystery: sure, Pack Jack looks great, but does it put out?

We never did find out. A crooked “Closed” sign mockingly faced us down as we pulled into the lot. Pack Jack’s proprietors are out for a month, on what I hope is a well-deserved vacation.

Mr. Bir du Jour then gave me the heads-up on Rasta Dwight’s, a place that, since opening in 1997, has nabbed spots in numerous publications’ Best Of’s. Stashed away in Cotati’s Grapevine Center shopping plaza, its walls are decorated in sunny island murals saturated with that kitschy yet serene tropical turquoise color. Dwight makes everything fresh daily, so cross your fingers that they still have what you want. What I wanted was a pork sandwich, and what Dwight’s had was jerk pork ($7.75, includes one side). As I ordered, I could see Rasta Dwight back there slicing meat with a tender and loving efficiency. It was touching, really.

I took my pork sandwich over to the dining area, set down my tray, and glanced down at my sandwich expectantly. Oh, joy! The pork splayed across the bun beneath me was shredded! The rest of my lunch was spent in rapture. Dwight’s rich, red barbecue sauce was painted judiciously across the pork, enough to moisten and flavor but not so much to overshadow the meat. Its depth and spice packed a sneaky punch that started to kick in midway through. It’s as if the sauce was on delay. Mine was medium, and this was a medium that did not pussyfoot around. Heh!

And oh, the pork, its tender shreds yielding so willingly, melted in the mouth. When pork is cooked right, you don’t need to slice it; it shreds itself. The haunting smoke still lingers on my fingertips. This was the pork sandwich the way I knew pork sandwiches could be. I still prefer squishy white-trash bread to the hard rolls all of my pork sandwiches were built upon, but at Dwight’s I could happily overlook this as the sauce and the juices from the meat penetrated the roll, binding meat, bread, and sauce into one unified whole. Amen.

The coleslaw was the best I’d had so far (creamy dressing, celery seeds), but still not there. But I was too elated with the pork to care. Good meat makes all the difference. One cannot attain the highest state of barbecue without cooking the meat like you mean it, as if you were barbecuing your own children. And even if that last sentence did not come out right, if you know good barbecue, then you know what I mean, and now you must know Rasta Dwight.

But still, nothing is resolved. Who knows what lies beneath this surface-skimming of the hidden smoky pits of North Bay barbecue? It only grows more and more obscured with every deposit of barbecue grease that impregnates the fingernails. Now I not only have to try Pack Jack, I have to go back to Rasta Dwight’s. In the serious world of barbecue, though, complaints are petty.