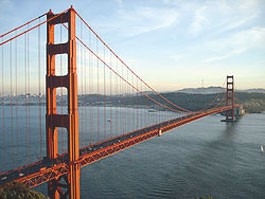 For most residents of the North Bay, the first sight of the Golden Gate Bridge’s foggy arches means nearness to a weekend destination. But beneath the Bridge’s striking grandeur lies a saga of struggle. In his new book, Golden Gate: The Life and Times of America’s Greatest Bridge (Bloomsbury Press; $23), historian Kevin Starr narrates the Bridge’s storied past, from the Spanish explorers’ “discovery” of the San Francisco Bay, modern artists’ interpretations of the bridge, the political, financial and design process to the 1,300 people and counting who have used this feat of creativity to destroy their own lives.

Full of historical narrative and trivia, Starr writes that John Charles Frémont, explorer and leader of the Bear Flag Revolt, was the first to call the bay “golden.” Frémont named the channel entrance Chrysopylae, or Golden Horn, after a channel of the same name that protected Constantinople. (Frémont’s choice seems eerily sibylline now, as San Francisco did indeed evolve from a small shipping village to a metropolitan hub.)