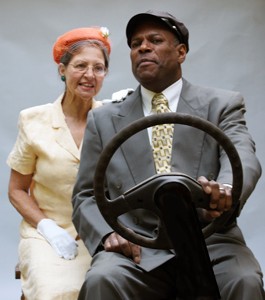 Pegasus Theater Company loses a home and gains everything else

Big Changes at Pegasus Theater Company” was the eye-grabbing headline that appeared several weeks ago on the Pegasus Theater Company’s website, accompanied by a long letter explaining the gory details: after more than 10 years at Monte Rio’s Pegasus Hall—the theater for which Pegasus was named—the scrappy little river town theater troupe was given its eviction notice.

After months of negotiations and at least one last-minute extension of the lease, the company was unable to come to an agreement with the building’s owner, Michael Tabib, who, ironically enough, founded the original Pegasus Theater Company. Now an official nonprofit, Pegasus gets to keep their name. Along with a decade of great memories, that name is now the company’s only concrete connection to Pegasus Hall, their home since 1998.

Such circumstances have spelled the end for many theater organizations, young and old. But the actors and crew of Pegasus, after a short period of public mourning, decided not to give up so easily.

“We decided that old dogs can learn new tricks,” says Lois Pearlman, a longtime actor with and director for Pegasus, “and that maybe we even have a few new tricks up our sleeve. We’ve built a pretty solid little theater community out here on the river, and none of us wanted it to end—though for a while it looked like it might be the end.”

“It wasn’t a complete shock, we did have some time to adjust to the idea before it actually happened,” explains Nancy Hansen, Pegasus’ new artistic director. “It was June 10 of 2008 that we first got notice of our possible eviction. So we’ve had a year to plan for this. We tried really hard to come to an agreement with the landlord, but ultimately, we were asked to leave. So here we are.”

Or to use the phrase now adopted by the surprisingly cheerful Pegasus gang, “free.”

“Were free, it’s true,” Pearlman agrees. “We’re free of monthly expenses, for one thing. We are now free to explore possibilities that weren’t open to us when we were responsible for paying a monthly rent. We really are trying to be as positive as we can. We’ve decided to say, ‘OK, this is the way it is. Let’s move on. What do we really want to do now?”

To come up with an answer to that question, the company met every first Sunday at Guerneville’s Village Inn, which has donated space for Pegasus to hold meetings, playwriting workshops and other get-togethers.

“Obviously, one of the big challenges, initially, was not having our own physical spot to meet,” Hansen says. “Our first instinct was to find a new theater somewhere, even if it meant moving out of Guerneville. But around New Years, we decided that Pegasus theater company is a company, first and foremost. This company is about a group of people making theater, it’s not about a building. So, over the course of a few meetings, we talked out all the possibilities, and it was pretty much a consensus that we wanted to stay in Guerneville. We did have other opportunities. We could have moved up to the 101 corridor. We had an opportunity to do shows out in Jenner. But we all agreed that we want to continue to serve the Russian River community we’ve always served, and Guerneville is the hub of that community.”

Home or no home, the people of Pegasus decided to announce their 2009 season, the first production of which is Alfred Uhry’s beloved Driving Miss Daisy, to be staged in the sanctuary of the Guerneville Community Church. The play, which inspired the Oscar-winning movie featuring Morgan Freeman, Jessica Tandy, and Dan Ackroyd, opens July 10, is being directed by Hansen, and will feature Pearlman as Miss Daisy, Arnie House as Miss Daisy’s African-American chauffer Hoke and Donovan Dutro as Miss Daisy’s son.

The choice of the Guerneville Community Church, affiliated with the United Church of Christ, may not be as off-the-wall as one might think. The church has already established itself as a creative hub and cultural center, and is also the headquarters of Guerneville’s low-powered local radio station KGGV 95.1-FM, located in a one-time broom closet. According to Hansen, the church is a perfect spot to launch Pegasus’ first season away from Pegasus Hall, since both institutions are solidly rooted in serving their communities.

Plus, it’s a beautiful church.

“It’s really a lovely venue,” Hansen says. “The church has a definite feel-good environment, with wooden pews and wooden walls.”

There were logistical issues to work out, for sure, but Pearlman says that both parties were eager to make the arrangement work, and have each accepted compromises as Pegasus moves toward opening night.

“It’s certainly different than when we were more or less in charge of our own space,” Pearlman laughs. “We can’t actually get into the church to set up our until a week before the opening, but that’s all right. Also, we’ll have to take our set down on Saturday nights to make room for church services on Sunday. That’s why we decided not to have Sunday matinees.”

“That’s where we’ve been spoiled,” Hansen says with a smile. “Having Pegasus Hall as a home base meant that once the set went up it stayed there till the play was over.”

“Of course, one of the beauties of doing Driving Miss Daisy,” says Pearlman, “is that aside from it being written so well, it is also written for a minimal set. That’s the way the playwright wanted it to be done, a very minimal set, with very slight changes to show the passage of 20 years in the course of 20 scenes.”

Pegasus’ other major project of the moment is the next installment of “Tapas,” their popular ongoing short-play series. Though not scheduled to run until summer of 2010, each “Tapas” series is a major undertaking, so the organizers are getting ready to start requesting submissions soon, in tangent with an ongoing short-play workshop class, lead by 2009 “Tapas” playwright David Beckman, to take place this month at the Village Inn.

“I think ‘Tapas’ is probably our most flexible and vigorous project,” Hansen says, “almost a theater company unto itself. We’ve proven that ‘Tapas’ has a huge following within the community, as far as audience. People really look forward to it and then they show up in large numbers. It’s important that we continue this. There’s not a lot of opportunity, out on the river, to see a lot of new plays.”

As Hansen and Pearlman explain it, the freedom afforded by being homeless also allows Pegasus to try completely new things, things they’d have been reticent to try in the past.

“We’d like to do a play in Spanish,” Pearlman says. “We’ve always harbored these desires to really outrageous things, but knew that if we didn’t bring in an audience we couldn’t pay our rent, so that limited the kinds of chances we could afford to take. Now with no home, we can afford to take chances.”

“We’re taking it one day at a time,” Hansen adds. “We’re reading a lot of plays, dreaming of the future.” With a delighted chuckle she adds, “I’m mostly reading short plays with just a few characters, plays that are as mobile as possible.”

And speaking of mobile, Pearlman mentions one possibility that will new meaning the Pegasus’ new label as a nomad company.

“It’s been suggested,” she says, “that we get a big flatbed truck and do a tour of Sonoma County, parking in shopping malls or parks and putting on a play for whoever happens to be there. That’s a crazy, impossible idea—but now, it’s not out of the question. We just might do that some day.”

Pegasus’ Short Play Writing Workshop will be held on two Saturdays, July 18 and 25,at the Village Inn, 20822 River Blvd., Monte Rio. $25. Call the box office, number above, for more details.