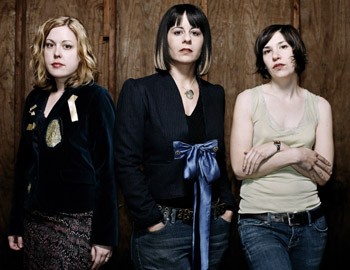 Why noise, why now?

Real noise, sheer random sonic squall, is emerging as the new nonmusic style du jour. Noise has played big in the ranks of indie rock for years, from the post-John Zorn splatter rhythms of countless hardcore bands to the post-Throbbing Gristle drone of industrial dance-rockers to the roughness of neo-garage. Now, the broad field being dubbed “noise-punk” seems to deserve its own subgenre due to the many noteworthy new bands that term spotlights.

On one side of noise-punk, there’s familiar alt music. Terrific guitar and drum duos like Lightning Bolt and Hella make tight, tense instrumental rock from overdriven riff fragments. There’s also the sloppy psychedelic blues-punk of Comets on Fire and Space Tourists. Another strain is more abrasive, where the Blood Brothers make a flailing blend of math-metal and emo, where Wolf Eyes make the sound of machines being crumpled and where the Locusts are genuinely scary and mean.

Why noise, and why now? It would be too easy to merely assume that rock is getting noisier because our times are more violent and unpredictable. Rock music has always been born of chaos and unease. Noise-punk may reflect the ambient sonic pace of modern life, where ring tones, commercials and iPods chop songs into random attention-bites. More likely, new noise is finding one of the few aesthetic directions left in a contemporary music scene that’s already been pushed, cross-bred and refiltered in endless ways.

Rock’s new noise aesthetic is also a response to hectic and frantic sounds in hip-hop and dance music. The alt-rock world loves to claim rappers Public Enemy as a sonic source. Their pre-Nirvana grooves are all shredded sirens, piercing tones, slamming polyrhythms and purposeful cacophony. Current acclaimed global rappers like Dizzee Rascal and M.I.A. are making a scratchy electro hip-hop stew that fills its cracks with odd sizzles and buzzing thumps.

Historically, even mainstream rock has used explosive, out-of-control sonic dissolution to suggest edginess or antagonism. All sorts of rock classics are powered by a tumultuous momentum, from “Whole Lotta Shakin’ Goin On” to “Purple Haze” to the legendary live shows of beloved punk screw-ups the Replacements. This surging state is some of the thrill heard on The Woods (Sub-Pop), the latest disc from alt-rock champs Sleater-Kinney.

It’s not just that the indie rock ladies bolster their quirky punch with louder guitars; it’s that those heavier guitar parts are distorted, scratchy, lurching and incomplete. Cuts like “What’s Mine Is Yours” and “Let’s Call It Love” jam on scattered overdrive, and most of the production is meant to make their alternating guitar parts sound like your speakers are falling apart. In the almost bright pop sing-along “Modern Girl,” an odd rumble of incorrect tones builds, roars and gnaws away the pretty song.

That cut reminds me of a recent visit with a musician friend. I needed his help determining whether Wolf Eyes’ caustic slab Burned Mind was just a piece of crap, nothing more than sonic tin foil, or something that was actually menacing in a meaningful punk way. He cast a suspicious eye on it as music, but then turned it around. He taught me this trick where you play a disc on your computer through one media program, such as Windows Media Player, while concurrently listening to downloaded songs through iTunes.

The results soon became hilarious and haunting, with Wolf Eyes’ skronk serving as wallpaper for easygoing classic rock like Steely Dan’s “Do It Again,” Fleetwood Mac’s “Over My Head” and Bruce Springsteen’s “Glory Days.” It seemed like noxious ghosts were humming along with familiar hits, popping in and out to make sure the song was uncomfortable, rubbing salt into sweet sounds. Of course, without those nice sounds, Wolf Eyes were intolerable.

Is this useful? Can nonmusic tell us something about our music? Perhaps–if only to serve as a reminder that things are not right.

This Year in Music