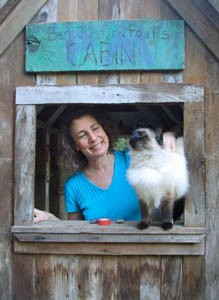 Noelle Oxenhandler tackles a taboo topic in ‘The Eros of Parenthood’

NOELLE Oxenhandler keeps bracing herself for a heavy helping of hate mail. The Sonoma County author says she wrote The Eros of Parenthood to “reclaim the natural joy in the physical love parents feel for their children.” But read those words again: Eros, parenthood, joy, physical love, children. Could you get more controversial?

Oxenhandler knows she has left herself vulnerable to being misread, for things to be taken out of context. And then someone could point a finger at her, say that she doesn’t take child sexual abuse seriously enough. Perhaps someone could even twist it around enough to say that she’s indirectly promoting child molestation.

But that hasn’t happened–not yet, anyway. Instead, the message of The Eros of Parenthood (St. Martins Press; $25.95), released in February, seems to resonate with people.

“I did a radio talk show in New York, and call after call was from people telling me how relieved they were that there’s a book like this,” Oxenhandler explains as she sits in the garden of her Glen Ellen home.

Talking about the physical love we have for our children has become a national taboo, says Oxenhandler, 48, a longtime contributor to The New Yorker and the author of A Grief out of Season, a book about divorce.

But it’s a truism of psychology that it’s what you can’t acknowledge that creates problems, and Oxenhandler hopes her book will prompt people to communicate about the topic and to explore their own feelings.

In The Eros of Parenthood, Oxenhandler argues that in our fervor to protect children from sexual abuse, the most innocent and nurturing of physical interactions have become suspect. Society has become so vigilant about touching children that the most tender of moments between parent and child are sometimes filled with anxiety and fear.

Some parents hesitate to be affectionate, Oxenhandler says, and others feel a judging gaze bearing down on them. Some even fear that their actions may be misconstrued and that their child may be taken away by a government child protection agency.

“This unease does not come out of the blue,” Oxenhandler writes. “It is not a hallucination or a psychic projection. I have only to pick up the newspaper to realize just how suddenly this haunting presence can materialize into brute reality. There are so many stories.”

Among the most shocking examples in Oxenhandler’s book is a case in the early 1990s of a young mother in New York who panicked because she felt some arousal while breast-feeding her daughter. She called up a local hotline for information. If she had been directed to the La Leche League, anyone there could have assured her that this feeling is normal. Some of the reason for it is chemical: The hormone oxytocin encourages a mother’s production of milk, but it is also the same hormone that controls a woman’s pleasure during orgasm, so the overlap is not surprising.

Unfortunately, the community volunteer manning the phones did not direct the mother to the La Leche League. Instead, the young woman was referred to a rape crisis center, which in turn reported her to the child-abuse hotline. The mother was arrested and the child was taken away for an entire year.

It was this unease as Oxenhandler was mothering her own young daughter, this feeling of a stern and frowning face gazing over her shoulder, that prompted the author to write an essay for The New Yorker about five years ago. In it she described this “eros of parenthood” as an “upswelling of tenderness, often with a tinge of amazement, that expresses itself primarily in touch. In its intense physicality, it partakes of the love that also exists between grownup lovers–but it is different in some absolutely crucial ways.”

Oxenhandler says now, “When I finished writing the essay, I was done with it on a personal level. But then, after it was published, the phone just kept ringing and ringing. For about a two-week period there, it wouldn’t stop.”

Agent after agent was asking Oxenhandler if she could write a book on the subject. “I thought about it for quite some time,” she explains. “And I decided that the subject material was rich enough for a book.”

She said that one of the biggest surprises in researching the book was to find how difficult it was to interview people for The Eros of Parenthood.

“It often felt like I was in some oppressive regime in which people were too scared to talk,” Oxenhandler says. “They would look left, then right, and then whisper to me.”

Oxenhandler interviewed one man who wanted to tell her how beautiful his little boy looks when he was taking a bath: “But even that was a huge taboo,” she recalls. “Every time he came close to saying something like that, he would preface it with ‘This is so hard to say.’

“If this book can help people talk openly about the subject of physical love between parent and child,” she says, “if it can help one father be able to say, ‘My son is so beautiful when he’s naked,’ without having to preface it with ‘This is so hard to say,’ then I’ll consider my work a success.”

Oxenhandler’s book is full of interviews, research, references to scientific studies. But what sets it apart from most sociology- and psychology-related books is that Oxenhandler is first and foremost a writer, an artist.

Oxenhandler remembers how thrilled she was when she got the idea of using Goldilocks to represent the journey we take in figuring out what is “too hot” and “too cold” when it comes to being intimate with our children. She recalls what a relief it was to remember the poem “The Bath” by Gary Snyder and how she could use that as a vehicle to explore child sexual abuse.

Her prose is beautiful, and she loves to play with words and rhythm as she smoothly weaves her message within the stories. The book reads less like an analysis of a social issue and more like an homage to the love between parent and child.

“I always knew that I would be a writer,” says Oxenhandler, who wrote her first novel at age 8. “It came naturally to me, and I loved doing it. And I also loved living in California. But I felt that I needed to exile myself from both creative writing and California for a long time. So, I became a philosophy major in college, and I moved to New York.

“But now I’m back in California and I’m back to being a writer,” she continues. “And I feel that I’ve come full circle. I feel very much at home.”