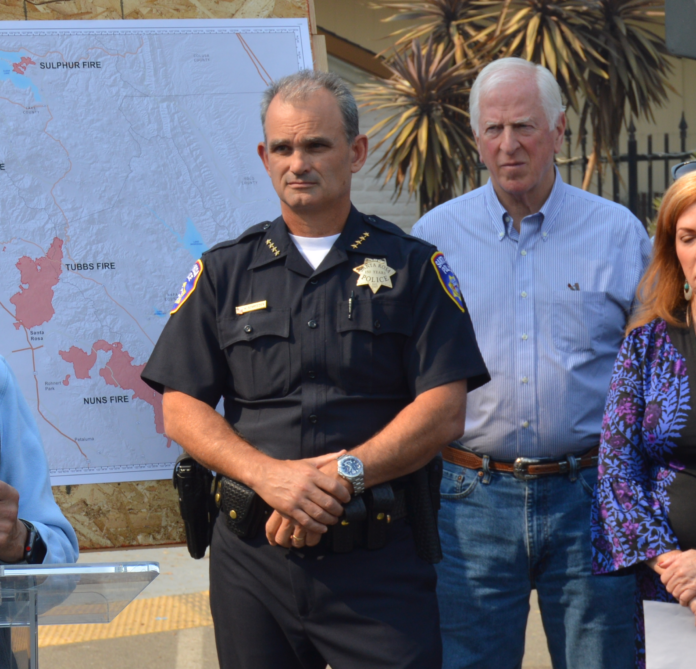 No Sleep til Containment

Santa Rosa Police Chief Hank Schreeder says his first planned recreational activity once the ash settles—“is, honestly, to get some sleep.” He’s not alone among the sleep-deprived first responders of Sonoma County this week, as the go-go juice du jour has been coffee and lots of it, provided on the arm to first responders by Peet’s throughout the crisis.

Schreeder regularly attends SRPD-sponsored Coffee with a Cop events, which are designed to foster community and communication between cops and the citizens they are sworn to protect. And wouldn’t you know it but National Coffee with a Cop Day was just a few short days ago on Oct. 4. Seems like a thousand cups ago.

The chief was one of numerous law enforcement officials on hand for the 1 p.m. press conference today at the Sonoma County Fairgrounds, where he reported that SRPD had made 18 arrests over the past week that involved some form of fire-related burglary, theft or looting. His department has also been involved in the missing-persons search along with the Sonoma County Sheriff’s Office and there are currently 26 persons on the SRPD list who remain unaccounted for. The bleary eyes are abounding in the second week of the wildfire disaster, but so to is a gleaming-eye sense of cautious optimism that the flames may be extinguished by the weekend..

Schreeder has been consistent in his repeated praise for the vast and ongoing assistance that has come from outside law enforcement agencies—but he’s not so keen on other forces coming in from the outside to commit crimes once the fires are out. Asked about a potential post-fire spike in crime in Santa Rosa, he said last week SRPD had concerns about “people [who] come from outside areas” to commit crimes, as residents grieve and sift through the ashes and try to fully absorb what the hell just happened to their city.