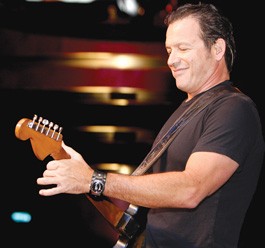 “This one” is Hard Believer, Castro’s 10th solo album, which showcases Castro versions of Bob Dylan and Allen Toussaint songs, and lays out a little autobiography. The Dylan song is a rather surprising choice—”You Gotta Serve Somebody,” from the 1979 gospel album Slow Train Coming. “It’s one of those songs I’ve always loved,” Castro said. “Dylan’s lyric writing is amazing. As a songwriter, I’m in awe of the stuff that rolls off his brain.”

The Toussaint cover, “Victims of the Darkness,” features a hard New Orleans funk that’s different than anything the band has ever done, Castro says. So is the unclassifiable “The Trouble with Soul” that closes the record. “That song kind of grabbed me,” he said. “I kept wanting to play it again. It let me play a little different style of guitar. I stretch out on my guitar work a little on this album.”

That stretching came at the same time Castro, who has been playing since age 10 and began his career in San Francisco bands 30 years ago, started taking guitar lessons. “I’d played everything I knew, so I had to learn something new,” he said. “I learned that it’s fun to play guitar. I’ve expanded my horizons a little.”

Castro’s New Year’s Eve show at the Mystic Theatre in Petaluma, slowly becoming an annual tradition, will serve as a special 20th anniversary for the band. Founding members Randy McDonald and Shad Harris will be on hand to play songs from every single record the Tommy Castro Band has recorded. “We’re always a band,” Castro says. “I’ve always considered this as sort of a group effort.”