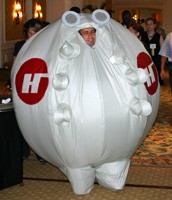 AN ADVANCED NEW technology will keep corporate managers safe even when climate change makes life as we know it impossible.

“The SurvivaBall is designed to protect the corporate manager no matter what Mother Nature throws his or her way,” said Fred Wolf, a Halliburton representative who spoke today at the Catastrophic Loss conference held at the Ritz-Carlton hotel in Amelia Island, Fla.

“This technology is the only rational response to abrupt climate change,” he said to an attentive and appreciative audience.

Most scientists believe global warming is certain to cause an accelerating onslaught of hurricanes, floods, droughts, tornadoes, etc., and that a world-destroying disaster is increasingly possible. For example, Arctic melt has slowed the Gulf Stream by 30 percent in just the last decade; if the Gulf Stream stops, Europe will suddenly become just as cold as Alaska. Global heat and flooding events are also increasingly possible.

In order to head off such catastrophic scenarios, scientists agree we must reduce our carbon emissions by 70 percent within the next few years. Doing that would seriously undermine corporate profits, however, and so a more forward-thinking solution is needed.

At today’s conference, Wolf and a colleague demonstrated three SurvivaBall mockups, and described how the units will sustainably protect managers from natural or cultural disturbances of any intensity or duration. The devices–looking like huge inflatable orbs–will include sophisticated communications systems, nutrient-gathering capacities, onboard medical facilities and a daunting defense infrastructure to ensure that the corporate mission will not go unfulfilled even when most human life is rendered impossible by catastrophes or the consequent epidemics and armed conflicts.

“It’s essentially a gated community for one,” said Wolf.

Dr. Northrop Goody, the head of Halliburton’s Emergency Products Development Unit, showed diagrams and videos describing the SurvivaBall’s many features. “Much as amoebas link up into slime molds when threatened, SurvivaBalls also fulfill a community function. After all, people need people,” noted Goody as he showed an artist’s rendition of numerous SurvivaBalls linking up to form a managerial aggregate with functional differentiation, metaphorically dancing through the streets of Houston, Texas.

The conference attendees peppered the duo with questions. One asked how the device would fare against terrorism, another whether the array of embedded technologies might make the unit too cumbersome; a third brought up the issue of the unit’s cost feasibility. Wolf and Goody assured the audience that these problems and others were being addressed.

“The SurvivaBall builds on Halliburton’s reputation as a disaster and conflict industry innovator,” said Wolf. “Just as the Black Plague led to the Renaissance and the Great Deluge gave Noah a monopoly on the animals, so tomorrow’s catastrophes could well lead to good–and industry must be ready to seize that good.”

Goody also noted that Jean-Michel Cousteau’s Ocean Futures Society was set to employ the SurvivaBall as part of its Corporate Sustenance® program. Another of Cousteau’s CSR programs involves accepting a generous sponsorship from the Dow Chemical Corporation, whose general shareholder meeting was May 11.

The Byrne Report will return next week.