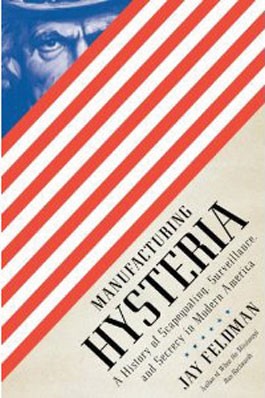 In his new book Manufacturing Hysteria: A History of Scapegoating, Surveillance, and Secrecy in Modern America, Jay Feldman examines anti-German hysteria during WWI, through 9-11’s anti-Muslim aftermath, to the current anti-immigration movement in Arizona. According to Feldman, economic, military and political crises have been exploited to curtail the rights of “subversive” minorities, leading to an erosion of democracy and civil liberties in the United States. Feldman talks about surveillance and lies in the United States on Tuesday, Sept. 13, at Book Passage. 51 Tamal Vista Blvd., Corte Madera. 7pm. Free. 415.927.0960.

From last year’s uproar over a proposed “Ground Zero Mosque” (not at Ground Zero, not a mosque) to racist fear-mongering that President Obama is secretly Muslim (as if this is a terrible offense), anti-Muslim scapegoating is alive and kicking. Thankfully, there are those fighting back with education. Religious leader and peace activist Imam Ali Siddiqui addresses anti-Muslim sentiment in America on Wednesday, Sept. 14, at Congregation Ner Shalom. 85 La Plaza, Cotati. 7pm. Free. 707.664.8622.

On Sept. 10, the first shovels break ground on the Sweetwater Spectrum, a residential community in Sonoma to meet the needs of young adults with autism. “Our goal is to build for autistic adults an environment typically not available to them,” writes the organization. The public groundbreaking ceremony is on Saturday, Sept. 10. 19347 Fifth St. W., Sonoma. 10am&–noon. www.sweetwaterspectrum.org.